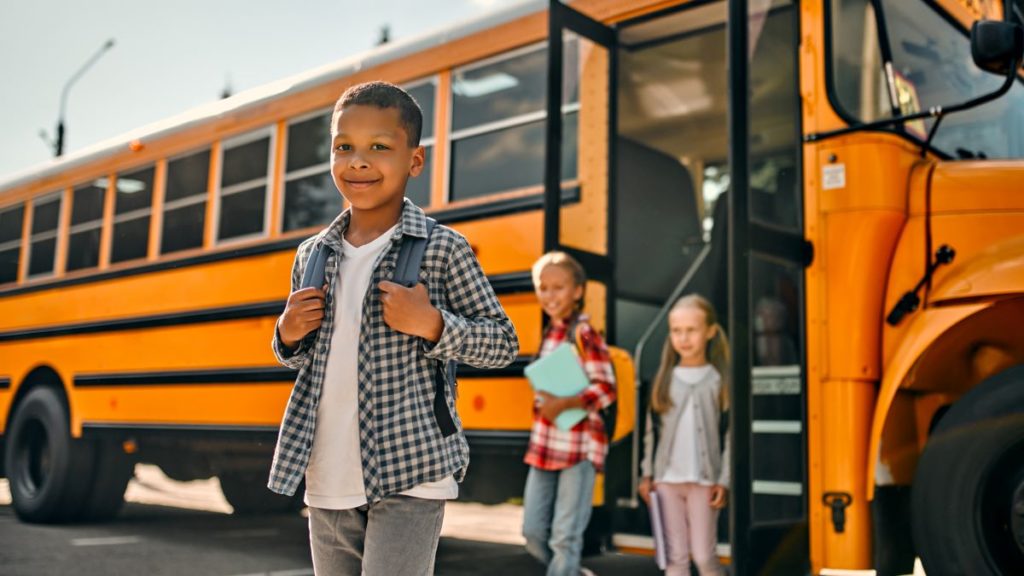 Few images of childhood are as iconic as the yellow school bus. Perhaps that’s because school buses haven’t changed with the times. Despite well-known environmental and health risks, most school buses today are not much different from the ones we rode when we were kids, filled with screaming children gulping lungsful of diesel exhaust. The classic yellow school bus is due for an upgrade. Electric vehicles have gone mainstream – even the Magic School Bus has upgraded from “magic gasoline” to a “MagBatt” power source – and now momentum is building for a cleaner, more efficient school bus fleet.

The impacts of diesel school buses are not uniform but fall disproportionately in low-income neighborhoods and on students of color. These neighborhoods already have higher levels of air pollution that are compounded by fleets of diesel school buses. What’s more, students from low-income families, who often are already at higher risk for exposure to polluted air, are more likely to ride school buses. School children, whose growing bodies are more susceptible to harm from air pollution, experience air quality inside a diesel bus that is five times worse than outside the bus. That helps explain the studies showing that riding a diesel school bus results in lower test scores.

Replacing diesel buses with electric ones reduces air pollution and improves children’s health and academic performance. That should be enough to motivate change. But the benefits don’t end there. Once purchased, operating and maintaining e-buses is up to 85% less expensive, offering tremendous savings to cash-strapped schools. Newer electric buses are also designed with vehicle-to-grid technology that allows bus batteries to serve as mobile power stations during power outages and emergencies. Quieter engines reduce driver stress and improve safety. Diesel buses don’t seem to have changed in decades. But electric buses are designed from scratch, often featuring narrower, more maneuverable shapes and improved visibility, as well as new-fangled additions like seat belts.

The general adoption of electric vehicles faces two major challenges. They are limited in range and the availability of charging stations. But school buses already follow a set route. They travel the same number of miles every day and fill up (or recharge) at fixed locations when their routes are finished. This is the perfect operating scenario for battery-powered vehicles.

But even as electric vehicles have caught on in unlikely markets like SUVs and pick-up trucks and even sports cars, electric school buses have yet to make significant inroads. Using technology that had worked for electric delivery trucks for 50 years, the first electric school bus didn’t hit the road until 2014. It cost almost a quarter-million dollars – nearly twice that of a standard diesel school bus. Just like the solar panel industry, the technology is there. But costs remain high until demand drives production to scale up, and demand remains low while prices are high.

Unfortunately, few districts have the budget to pay the higher up-front purchase cost. In some parts of the country, including Virginia, energy companies are helping districts obtain electric buses at the same price as diesel. Some electric bus manufacturers, like the zero-emissions Lion, actively work with school districts across the country to obtain grants for the purchase. World Resources Institute is working with manufacturers to increase production capability by 800% and make electric buses more cost-competitive against diesel models. There is even support at the federal level. The bipartisan infrastructure investment package passed in January provides $2.5 billion in funding specifically for zero-emission electric school buses.

For many school districts, the expense of refitting the bus system may seem insurmountable. But replacing buses is not optional. School buses last 12-15 years, and the average age of buses in the American fleet is almost 10 years old. Since schools must replace some buses each year, encourage your local district to make the switch to electric. Encourage the PTA to help your school pursue outside funding for upgrades. With new government funding and private grants, your school could obtain better buses and even save money for textbooks.