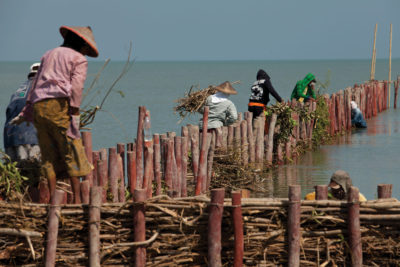 Why Are Nature-Based Solutions on Climate Being Overlooked?

On the low-lying northern shore of the Indonesian island of Java, the sea has invaded a kilometer inland in places in recent years, engulfing whole communities and vast expanses of rice paddy. But villagers are fighting back against further advances by erecting brushwood barriers in the mud to help the natural regeneration of mangroves.

This innovative nature-based response to rising sea levels and worsening storms, sponsored by the Indonesian government and the Dutch-based environmental group Wetlands International, could be scaled up across Asia. Within a decade it could be helping at least 10 million people in similar situations to protect and restore their denuded coastlines — all at a fraction of the cost of sea walls, says Jane Madgwick, CEO of Wetlands International.

But it can do that only if local projects are developed and the financing secured. And so far, she says, progress has been slow. Lives, livelihoods, and coastlines are being lost as a result.

And so it goes.

There are a “growing number of analyses and reviews of the effectiveness of habitats as natural defences,” writes Siddharth Narayan, now of East Carolina University. Hundreds of local projects to restore ecosystems on coastlines and mountains, in river valleys, forests, and grassy plains, have proved their worth in using restored nature to boost the resilience of millions of people to the ravages of onrushing climate change.

One study found less than 10 percent of funding for climate adaptation in least-developed nations went into projects that harnessed nature.

Most are cheaper and more effective than any engineering alternatives, with more spinoff benefits for ecosystems and fewer downsides. But the political will and funding that could turn pilot projects for nature-based climate adaptation into policy norms benefitting hundreds of millions more people are still largely absent.

Most nature-climate activities “are currently not funded,” says Ebony Holland, climate researcher at the London-based International Institute for Environment and Development.

Following the Glasgow climate conference last November, rich nations have been ratcheting up climate finance, fulfilling pledges to pour tens of billions of dollars into helping poorer nations respond to climate change. But Holland says that, as currently being allocated, little of this money will find its way to restoring nature’s defenses against climate change.

Nature-based climate adaptation remains the poor relation of climate finance. First, that’s because private investors, philanthropists, aid agencies, and development banks are usually happier to pay for climate “mitigation” projects that curb emissions of planet-warming gases than for helping communities adapt to climate change. Overall, adaptation of all kinds has so far attracted less than a quarter, and by some measures only 5 percent, of international climate funding, according to Barbara Buchner of the Climate Policy Initiative, a San Francisco-based think tank.

And second because policymakers and funders still mostly prefer engineering solutions. Holland found that less than 10 percent of funding of climate adaptation in the least-developed nations — which are usually the most vulnerable — went into projects that harnessed nature. The remaining 90 percent “poured concrete.”

Overall, the UN Environment Programme and the Global Commission on Adaptation, an international body set up by the Dutch government, both estimate that about 1 percent of total climate finance has so far gone toward such nature-based adaptation projects.

Governments in Glasgow promised to close the funding gap between adaptation and mitigation by doubling adaptation funding. Earlier this month, climate finance chiefs from leading funding governments met in Lahti, Finland to discuss how to achieve this. But official reports of the meeting record little discussion of the need for more nature-based projects. Instead, the main topic was to “seek ways to give the private sector a bigger role in adaptation finance.”

This could be a step back for nature since, in the past, private financiers have been even less keen on nature-based solutions than public-sector donors, says Madgwick.

The casebook of successful nature-based adaptation is growing fast. Perhaps best documented are the benefits from restoring coastal ecosystems such as mangroves to protect coastal communities from storm waves, tidal surges, and rising sea levels, which are all increasing as climate change gathers pace.

Salt marshes, sea grasses, and coral reefs all reduce the height of storm waves at less cost than sea walls, a study found.

The world has lost half its mangroves along shorelines, but those that remain are protecting some 18 million people and several tens of billion dollars’ worth of property from flooding every year, says Michael Beck, a marine scientist at the University of California Santa Cruz. Their importance can only grow. Unlike sea walls, mangroves appear to keep pace with rising sea levels, self-seeding inland to maintain their barriers against storms and tidal surges and nurturing marine fisheries.

The island nations and river deltas of Asia would benefit most from their restoration, but a study by the World Bank and The Nature Conservancy found great potential too in African countries, including Guinea, Mozambique, Sierra Leone, Madagascar, and Guinea-Bissau.

The restoration of other coastal ecosystems can be equally effective. A review by Narayan of 52 such projects around the world found that salt marshes, sea grasses, and coral reefs all reduced the height of storm waves at typically between a half and one-fifth of the cost of sea walls.

Yet scaling up is failing to keep pace with the success of pilot projects.

In the Rift Valley in Kenya, pastoralist communities around Lake Baringo are creating small enclosures on their rangelands, from which livestock are temporarily excluded and where they can restore indigenous vegetation and bolster ecosystems and soils against worsening droughts. The work also improves local diets and provides new sources of income through sales of livestock, harvested grass seeds, grasses for thatching, honey, and charcoal, according to the project’s originator, the Kenya-based Rehabilitation of Arid Environments Trust.

Yet few of Kenya’s 10 million pastoralists have so far adopted the adaptation strategy, which could also help some of the poorest pastoral communities across the drought-ravaged Horn of Africa.

In parts of the Panchase mountain region of Nepal, a favorite with foreign trekkers, the restoration of wetlands and community ponds is protecting local communities against both worsening floods and droughts, while improving soils, revitalizing biodiversity, and encouraging tourism. It is part of a three-nation project known as the Mountain Ecosystems-based Adaptation Program devised over a decade ago by UN agencies and implemented in remote corners of Nepal, Uganda, and Peru.

On Java’s coast, a natural approach to holding back the waters. Read more.

But despite ambitious plans for new projects in neighboring Bhutan, Kenya, and Colombia, scaling up remains elusive. Communities in most mountain regions stressed by climate change are plagued by dam projects that extract their water for use downstream, rather than being helped to conserve their water and improve their climate resilience.

Some policymakers get the message. Zac Goldsmith, the British environment minister with a brief for foreign aid, told a committee of parliamentarians last year that “you tend to get much more bang for your buck in nature-based solutions.” Investing in nature was his “default position” because it was capable of simultaneously “dealing with mitigation, adaptation, poverty, and a whole bunch of other issues,” he said.

Nature-based solutions are cited in more than half of the climate pledges made by governments. But actions lag behind intentions.

So why aren’t they the norm? Some, such as Holland, blame funders. But Madgwick says “finance itself is not a constraint.” It is more about politics. “It seems very hard to get support for nurturing project development processes.”

One reason for this, she says, is that nature-based adaptation offers a wide range of often long-term benefits that do not fit conventional timelines for assessing aid projects and which no one government ministry can assess. “The silo structure of national budgets is a real issue.”

Her colleague Keizrul bin Abdullah, an engineer who chairs Wetlands International in Malaysia, says the slow progress in deploying nature-based adaptation in his country and across Asia is partly due to old-fashioned thinking. “Engineers remain hesitant until the techniques are proven to work better than concrete,” he says.

Nathalie Seddon of the Nature-Based Solutions Initiative, an interdisciplinary research center at the University of Oxford, agrees. “Engineered solutions can usually be implemented with relative certainty about the type and timescale of benefits [whereas] the response of ecosystems is much harder to predict and cost.” Verifiable, quantifiable proof of the value of nature-based adaptation is often thin on the ground.

The science of nature-based climate adaptation is less advanced than that for mitigation, agrees Rob McDonald at The Nature Conservancy (TNC). His former TNC colleague Bronson Griscom, in a widely cited report in 2017, found that more than 30 percent of cost-effective climate mitigation from then until 2030 could be achieved through sequestering carbon in natural ecosystems.

But for adaptation, “the science is less far along.” says McDonald. “There is not a good quantitative sense yet of how many people we could help in total, what hazards we could help adapt to, and where those people are located.”

Nature-based adaptation is often seen as a high-risk endeavor. “Nature-based solutions are increasingly prominent in climate change policy,” says Seddon, noting such solutions are cited in more than half of the climate pledges, known as Nationally Determined Contributions, made by governments in Glasgow. But actions lag behind intentions.

In Bangladesh, a country at huge risk from rising sea levels, mangroves have historically provided protection from cyclones. The government often talks about reviving them as a coastal defense strategy. But Seddon found that 88 percent of the nation’s climate adaptation projects were primarily engineered interventions, and only 12 percent qualified as “green” solutions.

Not all ecosystem restoration will provide the hoped-for benefits for the most vulnerable communities. Any externally imposed project could undermine existing local strategies to cope with a changing climate, warns Siri Eriksen of the Norwegian University of Life Sciences. If local interests are ignored, even the best-intentioned schemes risk “reinforcing or even worsening the vulnerabilities of marginalized groups,” the British parliamentary committee reported.

Following promises made at Glasgow, now should be the moment when nature-based solutions take center stage.

But engineering projects have much the worst record, says Lisa Schipper of the Environmental Change Institute in Oxford. Many backfire, she told Yale Environment 360 during the Glasgow climate conference, leaving many of the poorest even more vulnerable to climate change than they were before. Sea walls protecting farmland in Bangladesh, for instance, often increase the risk of flooding in the lowest-lying areas, which are vital for the poor and landless.

With billions of people potentially in harm’s way as climate change accelerates, the stakes for making a success of nature-based adaptation are immense. Following the Glasgow promises to ramp up funding for adaptation, now should be the moment when nature-based solutions take center stage.

Why keeping mature forests intact is key to the climate fight. Read more.

Ensuring that adaptation funds go to bolstering ecosystems would also immeasurably improve the chances of meeting international targets for conserving 30 percent of the earth’s lands and waters, which are set for agreement at the next meeting of the Convention on Biological Diversity in Kunming, China later this year.