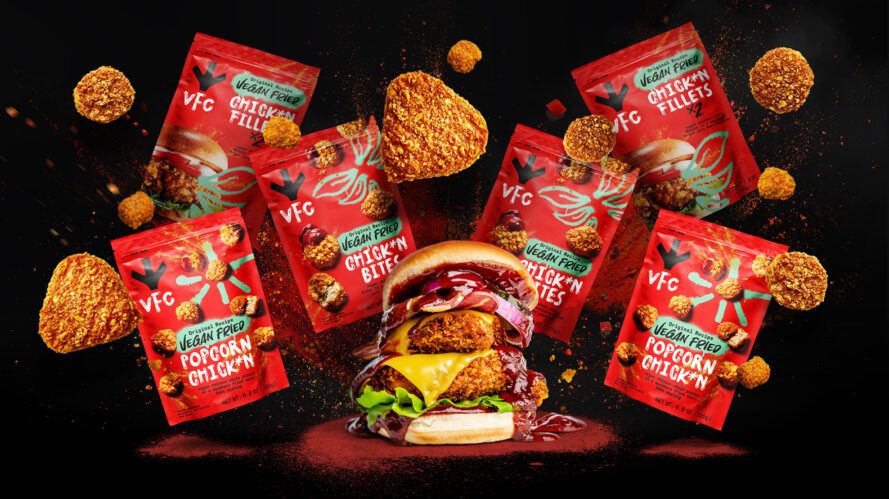 In September of 2020, Matthew Glover and Adam Lyons videoed their visit to a factory chicken farm in the U.K. Glover, a vegan crusader and founder of Veganuary, had been to factory farms before. Lyons, a chef and long-time restaurant insider, had not.

“Fuck my life,” Lyons exclaimed as they entered a shed full of 40,000 chickens — smooshed together, pink with wounds, sprawled on the ground with legs too weak to support them. This single farm contained approximately 250,000 chickens. About 1,500 such farms exist in the U.K.

“When you were running your restaurant and you were cooking chickens, did you ever make the connection between the chicken that arrives from the supplier and this kind of scenario in a factory farm?” Glover asked Lyons.

Technology has come a long, long way. For first-world folks used to basing meals around meat, it’s easier than ever to find alternatives. And we’re not just talking tofu. VFC has made a delicious alterna-poultry.

“We chose chickens because they’re the most abused animals in the U.K.,” the company said. With a product like this, you don’t have to choose between enjoying dinner and being on the side of the abuser.

So, how do you turn plants into chicken? It’s all about the wheat protein. So sorry, Celiacs, this one is not for you. VFC’s Chick*n Fillets, Chick*n Bites and Popcorn Chick*n are about 10% wheat protein, plus flour, oil, spices and a few other things. Each 100-gram serving contains about 15 grams of protein, 3.2 grams of fiber and 215 calories.

Right now, the way for U.S. consumers to purchase VFC products is through online retailers Vejii or GTFO. The fillets and fried popcorn chick*n cost $7.29 per pack, and the bites are $7.49.

VFC sent me some samples to cook in my home test kitchen. Learn from my experience — if you order, get them in the freezer right away. My chick*n came in a huge box without identifiers, so I didn’t realize what it was and left it sitting around for several hours before unpacking. This is a problem since it’s not supposed to be cooked from frozen. Nor is it supposed to be thawed and refrozen. Fortunately, no food poisoning in our household yet.

All three products were a cinch to cook. Just stick them in the oven for a while to heat up. We put the fillets on sandwiches and added the bites to a pan of roasted potatoes, peppers, onions and carrots. The cornflake coating brought me back to my pre-veg childhood, when my mom and I would roll chicken body parts in milk and cereal before baking in the oven. All the VFC products were a big hit in my now-veg household.

I’m not a person who enjoys watching tortured animal videos to bolster my vegan self-righteousness. I tend to promote from a kinder place of positive reinforcement. But I sure got a kick out of VFC’s handling of haters. Instead of placating them, they devote a page of their website to what they call “cluckwit myths.” I checked in with VFC and was reassured that yes, indeed, these are answers to real messages they got on social media. Vegans will get good laughs as VFC hilariously takes down haters who broach such topics as “we’ll be overrun by animals,” “a catfish was turned female from eating soy” and “if we aren’t supposed to eat animals, why are they made of food?”

Nor is the brand afraid to publicly confront the similarly named KFC. VFC posted an article on its website claiming that a farm supplying the chicken slaughter giant pimped out a chicken shed with swings and bells for poultry enrichment, then invited an influencer to film the awesome life of factory chickens. When VFC followed up several weeks later, the same shed was devoid of enrichment and overcrowded, as usual, with sick and dying chickens.

“We know why companies that sell chickens’ meat also try to sell a story about how much they care,” the post goes on to say. “The number of people ditching meat – for animals, the environment and their health – continues to rise. But did they think they would not be found out? Did they think we’d just say: ‘Ah, isn’t it nice that they have provided some perches for the birds?’ and not bother to check the truth? It’s like they don’t know us at all.”

You don’t have to spend much time at all looking into VFC to understand they are squarely on Team Poultry. They make delicious fillets a vegan can feel proud to buy and consume.

This site uses User Verification plugin to reduce spam. See how your comment data is processed.
About us - insight diabetes. Juga.