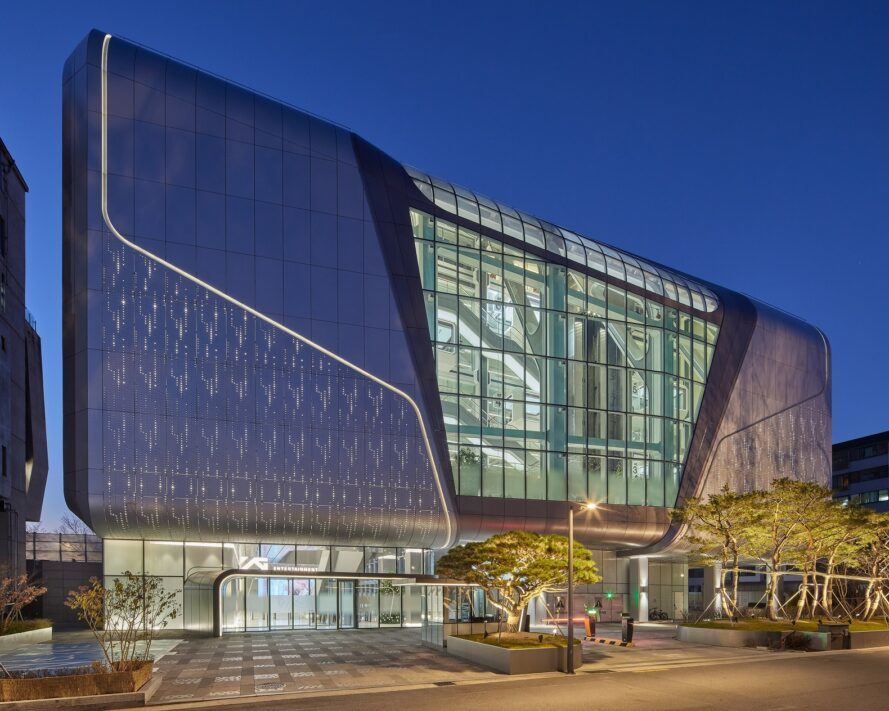 Korean pop, better known as K-pop, is all the rage in its home country and around the globe. With the expansion of the industry, the producers of K-pop have also erected a new headquarter building in Seoul, Korea. It’s a reflection of entertainment icons along with elements of nature.

YG Entertainment began planning the new structure in 2017, with the help of designers at UNStudio. As a result, they hope to draw in K-pop fans hoping to spot their favorite artists coming and going from the recording studios and meeting rooms in the building.

UNStudio modeled the new headquarters after the music industry vibe. It’s ultra-modern, sleek and futuristic. Yet, the building is oriented to take advantage of views of the park outside one side and landscaped spaces throughout the inside the structure.

Seoul is an industrious city. The headquarters’ location is surrounded by a mixed environment of low-density houses combined with green spaces, a river, highways and bridges.

The new YG Headquarters is situated directly next to the well-known existing YG Building, a model for the “black in black” concept. In contrast, the new HQ interior design is coated in a range of white tones that provide a bright atmosphere.

Furthermore, the organization of the building’s components is structured around the concept of connecting indoors to the outdoors while outlining flow throughout the building. A monochromatic color palette along with natural lighting from a central atrium helps achieve these goals.

The resulting daylight floods each of the seven office levels. The atrium is punctuated by exposed capsule-like meeting rooms that can serve as work or rest areas. Additionally, greenery is emphasized both inside and outside the building. Plants buffer the stark modernism of the architecture. The ground level features a garden that welcomes visitors upon arrival.

Balconies further accent outdoor living with views of the park while providing passive temperature control by shading lower levels from the intensity of the sun. Lastly, building-integrated photovoltaics (BIPV) solar cells are integrated in the south-facing façade and on the roof to increase energy efficiency.