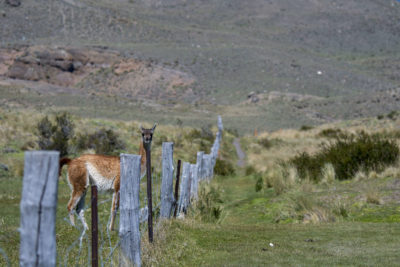 Unnatural Barriers: How the Rapid Rise of Fences Is Harming Wildlife

The most famous fence in the United States is the expanded border wall pushed by former President Donald Trump. Intended to prevent illegal immigration, the barrier also keeps wildlife from moving between the United States and Mexico.

“The main threat of the border wall is not the localized area of habitat loss and habitat degradation,” said Aaron Flesch, a wildlife biologist at the University of Arizona, who has studied the wall’s impacts. “It’s the landscape-level impacts of curtailing or completely precluding wildlife movement and eliminating landscape connectivity at large scales.”

Bighorn sheep or jaguars, for example, are cut off from others of their kind on the opposite side of the border. That means that the genetic interaction needed to keep small populations of jaguars or ocelots healthy may be affected. It also means bighorn sheep in Mexico may not be able to migrate north to escape a hotter and drier climate.

These are the kinds of impacts caused by the many millions of miles of barriers around the globe that slice and dice the natural world. It’s a rapidly growing problem, with fence projects expanding worldwide. In Europe, nations are building new fences to keep migrants from illegally crossing borders in isolated areas. In East Africa, livestock fencing is interrupting the migrations of the region’s storied wildlife. A new fence between Mongolia and China has blocked the movement of gazelles. And the list goes on.

Until recently, the study of fences and their role in conservation biology has been scattershot. Half of the studies were done in just five countries, with many focused on the effects on medium-sized animals. And fences still are not part of the Human Footprint Index, a database of human changes to the earth used by researchers to measure the cumulative impact of human development.

“Taking fences into account gives a better understanding of the cumulative effects of development on the landscape.”

But that is changing. Several years ago, biologists in the Northern Rockies published a paper titled “A fence runs through it: A call for greater attention to the influence of fences on wildlife and ecosystems.” In 2020, a meta-analysis in BioScience looked at all the studies of the effects of fences and found that their profound impacts are often ignored or greatly underestimated.

Recent research shows that these impacts extend far beyond blocking animal migration routes and include furthering disease transmission by concentrating animals, altering the hunting practices of predators, and impeding access to key areas of water and forage. Fences may also prevent “genetic rescue” if an isolated population is decimated by disease or a natural disaster.

Wenjing Xu — a PhD student at the University of California, Berkeley and a co-author of the BioScience paper — calls fences “the wires that shape the world.” She and others liken the “aha moment” of the growing realization of the importance of fences to the evolution of the sub-discipline of road ecology. The impacts of roads on ecosystems — most notably how they open up previously undisturbed areas to exploitation — were once similarly ignored. But when the effects of roads on the natural world were identified and named, it changed the way people perceived them and helped bring attention to how critical roads are in conservation planning.

The reason that conservation has been largely fence-blind, scientists say, is partly a matter of perception. “Fences are everywhere, for as long as people can remember,” said Xu. “When you look at a landscape, you don’t see fences themselves, you see livestock roaming and wildlife crossing. You don’t see the fence, because you’re so used to it. People take them for granted.”

Fences are also hard to see from above with satellite and other types of aerial mapping, essential tools in modern conservation. “You can’t see the fence, but you can see shadows of fence posts and a distinct difference of land cover type, and you have to make an assumption of that’s where a fence would be,” said Andrew F. Jakes, a wildlife biologist with the Smithsonian Conservation Biology Institute and the lead author on the 2018 “fence runs through it” paper. “It’s not easy. And then you don’t know if it’s a four-strand barbed wire fence or a woven wire fence.

“Things are right at the beginning stages of how we are going to map fences … Taking fences into account creates a better understanding of the cumulative effects of development on the landscape. Fence ecology affects not only wildlife, but ecosystem processes, and it has a wonderful intersection with people and communities. There is a lot more to learn about the impacts of fencing.”

The 2020 analysis found that fences affect ecosystems on every scale, from decreasing insect abundance, because they give spiders ample places to build their webs, to impeding the long-distance migration of everything from wildebeests to mule deer. By concentrating animals more closely together than they might be in the wild, fences could increase disease transmission, an issue that has not received much attention. That could be especially important now as Covid and chronic wasting disease spread rapidly among wildlife populations.

A Mongolian gazelle was tracked for 20 days along a fence as it tried to find a place to cross.

Wildlife face two categories of threats from fences, one direct and one indirect. For example, one of the key direct threats to the greater sage grouse — a species in steep decline in the U.S. West — is that they fly low and are often killed by slamming into strands of barbed wire. Antelope in North America and guanaco in South America, among other species, get tangled up in fences and die of starvation or injure themselves.

Indirect threats include the blocking of migration routes, the elimination of habitat, and changes in hunting by predators. Fences, for instance, are sometimes used by wolves to corral their prey. And a rapid expansion of the number of fences in wildlife-rich East Africa has blocked the great migration of wildebeests in the Greater Mara region of Kenya, where the animals need to follow the rains to find food and water. Some are dying for lack of water.

Species or ecosystems: How best to restore the natural world?

“People are mapping fences there, and you can clearly see how it has exploded in the last 20 years,” said Xu. “There is evidence that wildlife numbers have really decreased with the increase in fences. It’s a tragedy.”

In regions like the Mara, fences are going up because the people building them have to be able to manage their livestock, often their most valuable asset, and keep animals away from their crops. That’s why fence ecology is intertwined with social and cultural issues.

On the border of China and Mongolia, a Mongolian gazelle was tracked for 20 days along a fence as it covered 30 miles trying to find a place to cross.

“Fences can create ecological ‘no man’s lands’ where only a narrow range of species and ecosystems can thrive,” says Alex McInturff, a wildlife ecologist at the University of Washington and lead author of the 2020 paper. “As they are built at an accelerating pace around the world, ecosystem collapses are likely to follow.”

The world’s longest fence, and an object lesson in how fences change the natural world, is the Wild Dog Barrier Fence, which stretches 3,488 miles across the corner of southeast Australia. Researchers say the massive fence has created two “ecological universes” on either side of the wire. On the inside of the fence, where farmers trap, shoot, and poison the dingoes that do manage to get through, it has caused a trophic cascade. The lack of dingoes on that side of the fence has meant many more kangaroos, which has led to overgrazing, soil erosion, the loss of soil nutrients, and has even altered the geomorphology of sand dunes and stream flow. This has reduced cover for the dusky hopping mouse, an imperiled species, and made it far more susceptible to predators.

Fence construction is growing rapidly throughout the world. An extension of the dingo fence is underway to add another 460 miles. Stout, often impermeable, fences are going up on national borders in Eastern Europe to deter migrants, and Europe now has more miles of border fences than it had during the Cold War. In China, the chief threat to Przewalski’s gazelle is habitat fragmented by new barriers. The length of fences in the American West alone is estimated at more than 620,000 miles — nearly three times the distance from the Earth to the moon.

Better understanding the role that fences play in ecosystems can often lead to simple fixes by figuring out which ones can be removed or modified and then doing such things as raising the height of the bottom strand to allow animals to pass under or lowering the top wire to allow them to jump over.

In the western U.S., simple reflectors are being added to fences to allow sage grouse, peregrine falcons, and other birds to see the wires and avoid collisions. Some ranchers are using portable fencing, moving it from pasture to pasture when needed, rather than leaving fences up all the time. And virtual fencing, where livestock wear collars that vibrate when they get close to a wire in the ground — like an invisible fence for dogs — is being widely used.

Many miles of fence have been removed by tribes, land trusts, ranchers, and government agencies as a better understanding of the role in the natural world emerges. One of those efforts is the Absaroka Fence Initiative in Wyoming, which has taken up miles of unused “ghost fencing” in Wyoming.

Fences aren’t always a problem — in the right place they can be an essential tool for conservation. New fencing, for example, has become an important tool in managing predators — especially grizzly bears near more populated areas. Stout electrical fences are essential for fencing off chicken coops, beehives, and other grizzly bear attractants.

On the Confederated Salish and Kootenai Reservation in western Montana, there are dozens of underpasses and overpasses with high fences that funnel wildlife into them, enabling grizzly bears, wolves, deer, and other species to safely cross Interstate Highway 93.

One of the pioneers in the field of fence ecology, Arthur Middleton, an assistant professor of wildlife management and policy at UC Berkeley, has studied the role of fences in antelope migration in Wyoming. He hopes the new focus on these barriers will “open people’s eyes to the scale of fence effects.”

“Our next steps,” he said, “are to better understand the actual biological cost that all these fence-related behavioral changes have on wildlife populations, and find ways to mitigate those effects at a really large scale.”