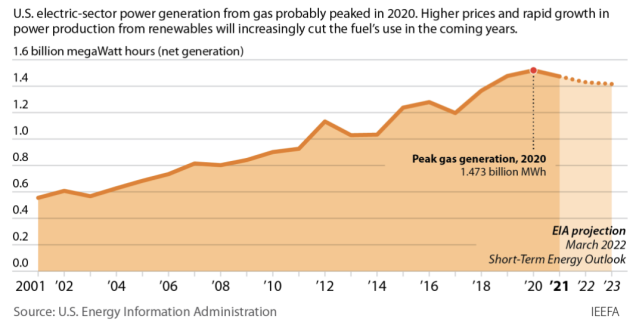 In the U.S., electricity generation using natural gas likely hit its peak in 2020, according to a new report from the Institute for Energy Economics and Finance (IEEFA), which finds that cheaper wind and solar are edging gas off the power grid.

Unusually high natural gas prices are exacerbating this trend, as kinks in the supply chain and Russia’s war on Ukraine create a global energy crunch. The U.S. is shipping record amounts of gas to Europe to help allies wean off Russian imports, with the added demand driving U.S. natural gas prices to their highest level in more than 13 years.

High gas prices have thrown a temporary lifeline to coal, which has seen output surge globally. But in the U.S., coal continues its long-term decline, with several of the largest power companies — including the Tennessee Valley Authority, Duke Energy, and Georgia Power — planning to phase out coal by 2035 and shift to cheaper renewable power.

IEEFA found that “the soaring cost of fossil fuels and unexpected disruptions in energy security are now supercharging what was already a torrid pace of growth in solar, wind and battery storage projects.”

While wind, solar, and hydropower currently account for around a fifth of U.S. power generation, their share could rise to more than a third by 2027, IEEFA predicts. Between renewables and nuclear power plants, the U.S. could generate more than half of its electricity from carbon-free sources by 2027, “a massive transition from just five years ago,” the report said.

Three Myths About Renewable Energy and the Grid, Debunked