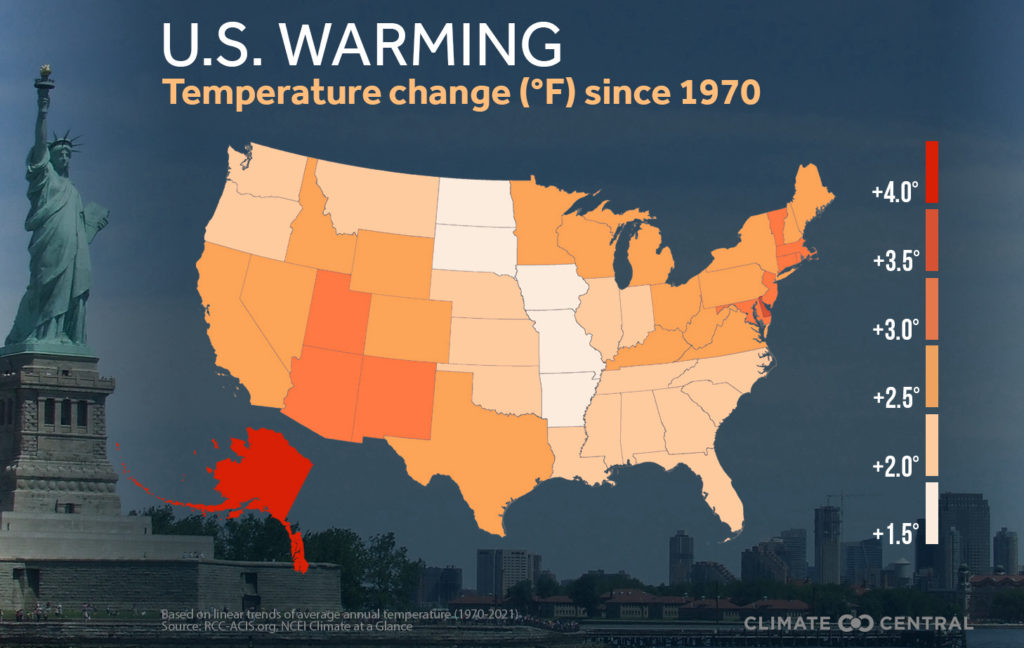 U.S. Has Warmed by 2.6 Degrees F Since First Earth Day

The U.S. has warmed by 2.6 degrees F since Earth Day was first celebrated on this date in 1970, though some regions, such as the Southwest, have warmed more than others, according to a new analysis from Climate Central.

In the last 52 years, global carbon dioxide concentrations have risen by 30 percent, enough to warm the planet by 1.8 degrees F on average. The Paris Agreement aims to keep warming to 2.7 degrees F. Warming in the United States has nearly reached this mark, and in some places surpassed it by a significant margin. Temperatures have risen 3.5 degrees F in New Mexico and New Jersey and 4.3 degrees F in Alaska, the fastest-warming state, according to the analysis, which gauged temperatures across every state except Hawaii.

All but two of the 246 cities analyzed have seen temperatures rise since 1970, with 170 of those cities warming by 2 degrees F or more. The fastest-warming cities were El Paso, Texas, and Las Vegas and Reno, Nevada, which have heated by 5.1 degrees F, 5.9 degrees F, and 7.7 degrees F, respectively.

President Biden marked Earth Day by signing an executive order aimed at preserving the nation’s old-growth forests, a major carbon sink that is increasingly threatened by drought and wildfires.

“Wildfires and extreme weather events are growing in frequency and ferocity, engulfing communities in the West and across the country and costing lives, homes, and money,” the White House said in statement.