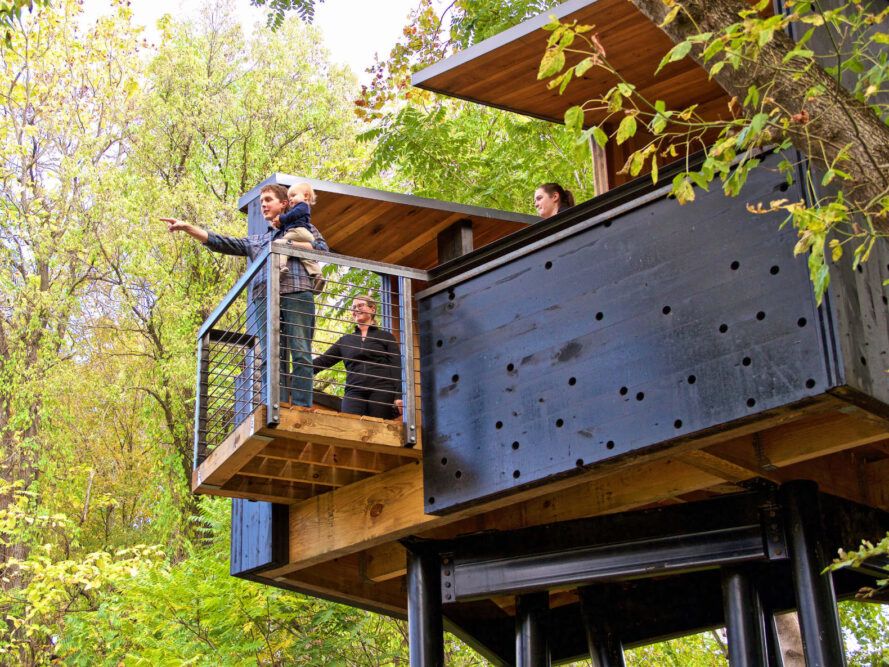 In 2018, the city of Radford asked Virginia Tech University students and faculty to construct a new train observation tower along the New River. The project developed over two years and incorporated locally-sourced building products. It highlight Radford’s transition from a historic industrial town and the university’s advanced interdisciplinary research. The New River Train Observation Tower is located in a brownfield area with views of the river and historic railroad bridge.

Early on in the design process, the team selected cross-laminated timber (CLT) as the primary building material. It is sustainable and sturdy enough to support a variety of structural needs. However, as the project developed, the students realized that the carbon costs to ship industrially-produced CLT were too high. Instead, the team began investigating materials they could source locally.

Around the same time, another interdepartmental group of students and faculty at Virginia Tech finished developing a new construction material: hardwood cross-laminated timber (HCLT). Unlike conventional softwood-based CLTs, HCLT uses low-grade Yellow Poplar hardwood, which is abundant in the region. In fact, HCLT outperforms all other forms of commercial CLT. The construction team used the highly-efficient HCLT panels and pursued legislative approval of the new material. It required proof that HCLT prevented moisture, UV, fungal and insect-induced damages to the structure.

Once the design-build team received approval, they worked to maximize its capabilities. Through these explorations, they were able to create modular architectural spaces that feature three-inch thick structural cantilevers and exposed structural members. Additionally, the project’s HCLT panels use raw materials sourced and upcycled from within a 200-mile radius of the site. The team also filled screw holes with wax and coated the exterior envelope in linseed oil and pine tar to protect against the elements.

The project’s brownfield site poses several natural challenges for building, including its steep slope and dense vegetation. During preparation of the project’s foundations, building ruins from the Civil War were found, further complicating construction. Because of these challenges, the project utilized modular prefabricated components that were craned into place. These components are arranged in a simple configuration that maximizes views of the lush vegetation, New River and historic sites. A walkway bisects two modular HCLT cubes and cantilevers from ground level out over the slope, floating 20 feet above the site.

The New River Observation Tower is the first permanent HCLT building in the U.S. Its minimalist, low-carbon design makes it an exemplar for future explorations of sustainable materiality and construction.

This site uses User Verification plugin to reduce spam. See how your comment data is processed.
Weekendophold i tønder? se de bedste weekendophold i tønder. Google (xml) sitemaps generator plugin for wordpress. Once you have your domain and hosting in place, you can begin creating your website.