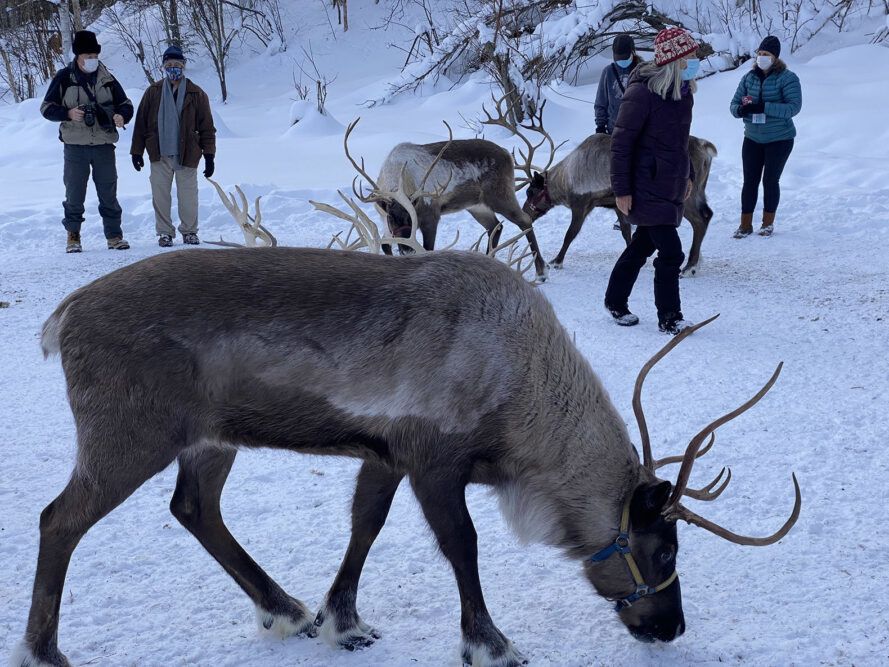 As I walked through the boreal forest just outside of Fairbanks, Alaska, I reached out and touched the marvelously thick fur of a passing reindeer. At 15,000 hairs per inch, they were better suited for the February day than I was, wrapped up in my parka, mittens and snow boots.

“Forty below is t-shirt weather for them,” said Jane Atkinson, owner of Running Reindeer Ranch and keeper of the reindeer herd. “They’re true Arctic thrivers.”

Before visiting the ranch, I knew little about reindeer beyond their magical ability to drag an airborne sleigh around the world in a single night. But Atkinson soon set me straight on all things reindeer.

In Europe, the terms “reindeer” and “caribou” are used interchangeably. But in Alaska and Canada, reindeer are the domesticated form of caribou. They’re the same species but have a long and interesting history.

Caribou are native to areas close to the Arctic Circle, including North America, Russia and Scandinavia. Nobody knows exactly when humans domesticated caribou, but archeological evidence from Siberia suggests that people may have trained the beasts to pull sleds 2,000 years ago. After archeologists unearthed and radiocarbon dated some artifacts near Salekhard, northern Siberia, contemporary Indigenous reindeer herders identified the artifacts as part of the headgear used to train young reindeer to pull sleds.

Fast forward to the 1890s. Whaling had decimated the marine mammal population around Alaska. So, the U.S. government introduced nonnative reindeer to Alaska to give the Inuit people another food source in addition to their traditional diet of walruses, seals and whales. The government also funded Sami reindeer herders from northern Scandinavia to teach reindeer husbandry to Inuit people. Later, the 1937 Reindeer Act banned Sami and other nonnative Alaskans from this occupation.

Meanwhile, some reindeer escaped their human herders and either formed their own feral herds or joined migrating caribou. This is especially true on islands, such as Nunivak, St. Lawrence, and the Pribilof and Aleutian Islands. About 12,000 of Alaska’s estimated 18,000 reindeer live on the Seward Peninsula, the remnant of the famous land bridge that allowed animals and people to migrate between Eurasia and North America.

Though Atkinson’s life now revolves around reindeer, introducing her herd to tourists was an unanticipated career direction. The idea first came up when her daughter Robin was 10. Unappeased by pets like hamsters, finches, guinea pigs and even a chinchilla, Robin dreamed of raising a big livestock animal. The girl spent a couple of years researching reindeer, talking to herders and saving her money. She tried to find a reindeer angle for every school project, from social studies to science fairs. Finally, the family bought its first pair of reindeer from Palmer, Alaska, about 330 miles away.

Over the centuries, reindeer farmers selectively bred the migratory instinct out of them. “Where they’re born is where their heart is, and they’re difficult to rehome,” said Atkinson. That held true for their original pair, who managed to escape one stormy night and try to get back home to Palmer. Atkinson and her friends and family followed reindeer tracks for four days. They enlisted the help of state troopers, Fish and Game personnel and local radio stations. Finally, the reindeer were found in a McDonald’s parking lot in Fairbanks and brought back to their new home. Hence the name, Running Reindeer Ranch. Since then, all their reindeer have been born at the ranch and are happy homebodies.

A visit to Running Reindeer Ranch starts with a safety talk before meeting the reindeer. When I was there in February, we still had to wear masks (though most Alaskans weren’t) due to a COVID outbreak in deer. We stood in a big circle on the snow while Atkinson warned us to watch out for antlers. “One of their favorite games is push my antlers,” Atkinson said. We were not to engage. Also, we should be careful of naughty reindeer who like to sneak up from behind and poke visitors in the butt.

Once we knew the rules, Atkinson’s helper released the reindeer, who thundered down a hill toward us to eat little piles of lichen set out for them on the snow. They can weigh up to 450 pounds, so it was a tad scary as they rushed past, but also thrilling. They’re gorgeous animals, and their antlers were even bigger than I expected. As they ate lichen, Atkinson introduced them to us one by one, telling us their names and histories and describing their personalities.

After meeting the 11 reindeer, we strolled up a snowy hill together. The reindeer were mostly interested in trying to find things to eat in the snow and rubbing their faces against trees but tolerated a fair amount of petting. They don’t exactly respect personal space, so I kept a constant lookout for antlers. Periodically, we’d stop, and Atkinson and her helper furthered our reindeer education as the herd foraged in the snow.

In Alaska, Atkinson told us, reindeer are livestock. So when she’s had vets out to the ranch, they haven’t always understood that her reindeer are more like pets. If one is ailing, she’s not going to just turn it into dinner. “My reindeer are lucky to have been born into a vegetarian household,” she said.

At one point, we stopped to listen to the clicking sound reindeer make when they walk. It’s the sound of snapping ligaments, an adaptation that helps them high step through the snow. In the famous Christmas song “Up on the Rooftop,” the “click, click, click” refers to their clicking ligaments, Atkinson explained.

Reindeer shed their massive antlers every spring and grow them back in summer at the startling rate of up to an inch per day. “It’s the fastest growing tissue in the animal kingdom,” Atkinson said. Another fascinating factoid? They can smell lichen through snow and have UV vision. “They can see under the snow and see the shadow of the lichen. Then they dive their head in and eat it.”

They are intriguing, gentle creatures, as long as they’re not trying to play “push my antlers.” Visiting them once made me want to return, preferably in summer when they turn brown and velvety. “They look like Hershey bars walking through the forest,” Atkinson said of their summer coats. Summer is also the season when Running Reindeer offers reindeer yoga. And what could be better than that?