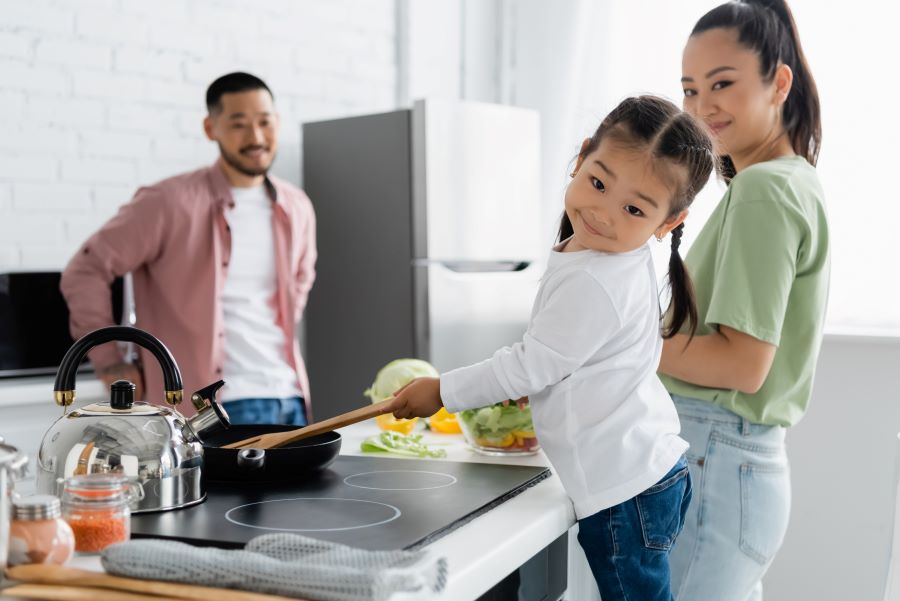 Reducing the Impact of Your Kitchen Range

Environmental Impacts of Your Range

Many cooks prefer a gas stove, but when you’re cooking with gas, you are directly burning fossil fuels to heat your food. If you only cook three times a week, your gas range (the combination of oven and stovetop) will release 91 kg/CO2 in a year – that’s about 3 1/3 pounds of greenhouse gas released each time you cook. The actual emissions could be much higher than estimates because gas lines leak methane along their entire length. Gas ranges are associated with poor indoor air quality, too. They release nitrogen dioxide (NO2), carbon monoxide, and formaldehyde into the home. One older study found that children in homes with gas stoves were 20% more likely to develop a respiratory illness. For anyone without an exhaust fan directly above your gas stove that vents outdoors, that research still holds true.

Conventional electric ranges don’t contribute to indoor air problems because the combustion takes place far away. But unless the electricity comes from renewable energy, electric ranges are still responsible for greenhouse gas emissions. Consumer Ecology has a calculator for the carbon footprint of different methods of cooking using electric and gas appliances. Counterintuitively, your electric range may generate more greenhouse gas emissions than a gas range because converting fossil fuels to electricity is inefficient. There is no Energy Star label for residential ovens and stoves. But some choices are more efficient than others. Electric convection ovens save energy by using a fan to circulate hot air around the food, decreasing cook times. Self-cleaning ovens have more insulation, which can further reduce lost heat and improve efficiency.

Induction technology has existed for more than a century, but induction stovetops are just now becoming commonplace, and are still more expensive than other options. Magnetic induction elements heat iron or steel pans directly by exciting the molecules magnetically. There is no open flame, and the cooktop surface remains cool even while cooking much faster. This makes magnetic induction stovetops safer than either gas or electric stoves, and almost twice as efficient. Research conducted by Electric Power Research Institute indicated that a medium-sized gas burner consumes 2,637 watts per hour compared to an induction cooker, which consumes 1,400 watts per hour.

For indoor cooking, the most efficient option is a self-cleaning convection oven with a magnetic induction stovetop. But when you switch to induction cooking, you may have to recycle your old cookware.

Until induction stovetops became a feasible option, cooking habits affected energy efficiency more than which appliance you bought. To cook most efficiently on the stovetop, covering pots with lids prevents heat from escaping, and can reduce energy use by up to two-thirds. Minimize heating requirements by using the smallest pan necessary. Similarly, only boil as much water as needed.

Obviously, you should never forget to turn off the oven when you are done. You can even turn off the oven a few minutes early; the heat already inside the oven will finish cooking the food. Like refrigerators, ovens are most efficient when well filled. Cook several dishes at the same time or cook larger portions for reheating later. Reheating takes less energy than cooking. Also in the oven, use ceramic or glass pans, which require lower oven temperatures (by about 25°F). Use thermometers or timers to avoid overcooking. Don’t cover oven racks with foil—this reduces heat flow and increases cooking time. Only run the self-cleaning function right after you’ve finished using the oven so it’s already warm.

Keeping your appliances clean and in good repair will prolong their useful life. You can do some simple repairs on gas ranges yourself. For more complicated issues, Consumer Reports’ tool Should You Repair or Replace Your Broken Appliance?  uses product costs, depreciation rates, and survey data to help you make the right choice. And when the answer is “replace” make sure you recycle the old one.