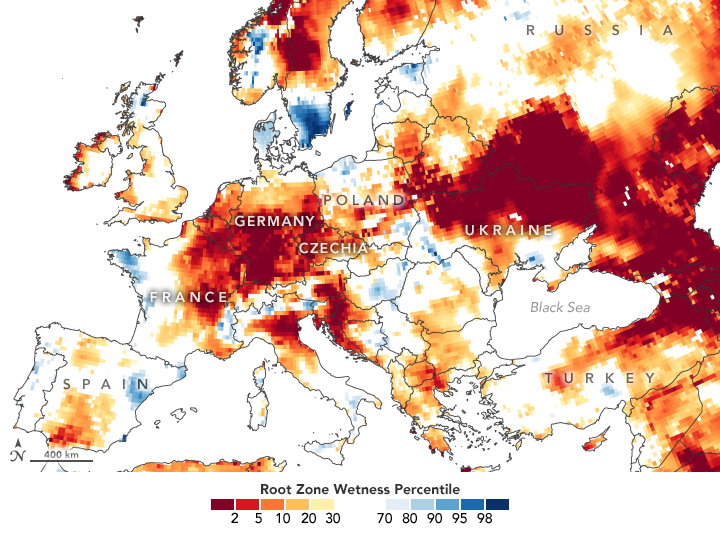 The 2018 to 2020 European drought was the worst in more than two centuries, driven in part by uncommonly high temperatures that exacerbated dry conditions across large parts of the continent, new research finds.

The drought affected around a third of Europe, including much of Germany, France, and the Czech Republic, and it lasted for 33 months, extending from April 2018 to December 2020. During that stretch, air temperatures were 2.8 degrees C (5 degrees F) hotter than the average over the last 250 years, according to an analysis of data going back to 1766.

HIgh temperatures and meager rainfall dried out soils, hurting crop yields. Maize production dropped by 20 to 40 percent in Belgium, the Netherlands, Luxembourg, Germany, and France, while barley production dropped by 10 percent across nearly all of Europe. The findings were published in the journal Earth’s Future.

“Decision makers should be prepared for significantly more severe drought events in future,” said Luis Samaniego, a hydrologist at the Helmholtz Centre for Environmental Research in Germany and co-author of the study. “Especially for devising new agricultural policies, this should be considered as a wake-up call to assess suitable measures to mitigate the threatening lack of water.”

This site uses User Verification plugin to reduce spam. See how your comment data is processed.
White sauce pasta with caramelized broccoli. Always choose cologne that you can afford:.