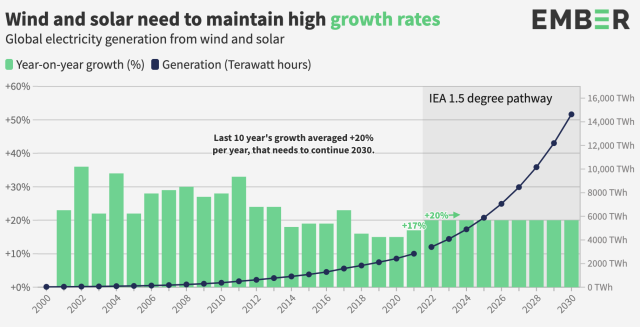 Rapid Growth of Wind and Solar Could Help Limit Warming to 1.5 degrees C

If wind and solar power continue the rapid growth they achieved over the last decade, rising by 20 percent annually until 2030, the global electricity sector will do its part to limit warming to 1.5 degrees C, according to a new report from climate think tank Ember.

“If these trends can be replicated globally, and sustained, the power sector would be on track for 1.5 C,” the report said. “But those shifts aren’t happening fast enough across all countries, and we’re far off-track in reducing power sector emissions. The result in 2021 was coal’s rise, at a time when it needs to be falling rapidly.”

Coal power grew 9 percent last year, its biggest gain since 1985, as a swift economic recovery drove up demand for power, and a spike in natural gas prices made coal more cost-competitive.

Dave Jones, global lead at Ember, said that “with sustained high gas prices amid Russia’s war with Ukraine, there is a real risk of relapse into coal, threatening the global 1.5 degrees climate goal. Clean electricity now needs to be built on a heroic scale.”

A new study finds that the world can make the changes needed to keep warming under 1.5 degrees C while also maintaining economic growth. In one scenario modeled by researchers, renewables provide seven times as much power by the end of this century as they did in 2010, with the global economy growing by a little less than 2 percent a year from now until 2100. The paper was published in the journal Oxford Open Energy.

“Continuing global economic growth is clearly compatible with achieving the temperature target in the Paris Agreement,” said Paul Ekins, an economist at University College London and lead author of the study. “Governments now need to step up to put in place the policies to stimulate the investments that are required to turn these projections into reality.”

As Subsidies Wane, Market Forces Drive the Growth of Renewables