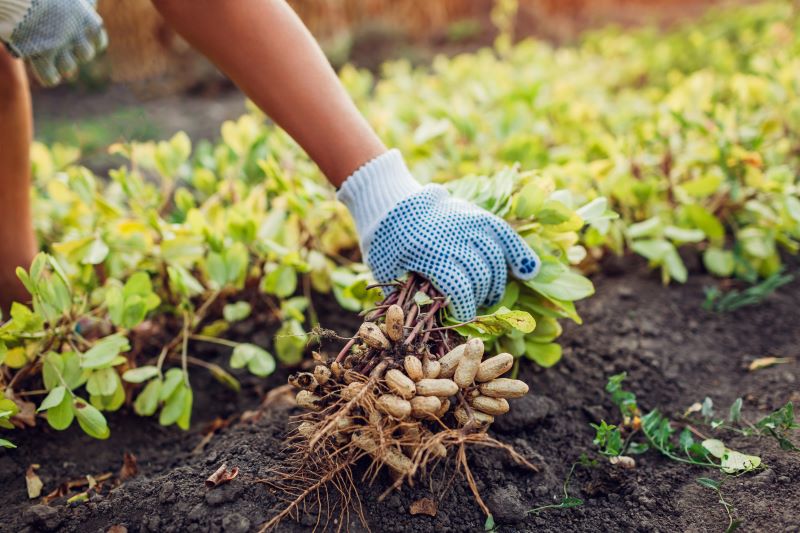 Peanuts for the Planet

It seems like every month there’s a new superfood trend touting the nutritional benefits of a previously unfamiliar — and usually exotic — food like açai, cocoa nibs, or avocados. Better known for snacking on airplanes and at ball games, peanuts are surprisingly nutritious, with the added benefit of a much lower environmental impact than trendy superfoods. Nutritious and sustainable? That’s a real superfood.

The average American eats approximately 220 pounds of meat per year, which accounts for more than 15% of their household carbon footprint. You can reduce that impact by switching to lower carbon types of meat and shopping for more sustainably grown meats. But a vegan diet may be the single most effective way for individuals to minimize their environmental impact, especially if they already rely primarily on public transportation.

Research shows that vegetarian diets are generally healthier. But many people are still concerned about getting enough protein without eating meat. New vegetarians do need to learn about vegetarian protein sources to replace meat in their diets. Options like lab-grown meat and alternative milks are an easy switch and are growing in popularity. However, highly processed foods are rarely as healthy or as sustainable as simple plant-based meals. Traditional diets often prove to be the most healthy, and legumes in particular have a proven track record. Beans and rice are eaten in some form in nearly every culture. Despite having shells and a nutty crunch, peanuts are not nuts. They are members of the Fabaceae plant family, which makes them a legume. Legume plants (such as beans) usually produce edible seeds called pulses. But the edible portion of the peanut grows underground as a root nodule.

Among legumes, peanuts have the highest protein content. At 25.8 grams of protein per serving, peanuts pack about the same amount of protein as beef. Peanuts are also low-carb and high in vitamins and minerals. As long as you don’t have a peanut allergy, peanuts are a nearly perfect protein source. (Reversing years of advice, the American Academy of Pediatrics has released new guidelines based on recent research indicating that early exposure to peanuts may help prevent peanut allergies.)

Compared to beef, peanuts also provide an excellent source of vitamins and minerals, including the B vitamins that many vegetarians lack. A serving of peanuts contains 9% of the RDA of iron, while beef is only a little higher at 12%. Because peanuts are very calorie dense, cooking with peanuts is not a simple matter of replacing meat with peanuts. Instead, rely on vegetable dishes and incorporate peanuts as a protein boost. Try adding peanuts to vegetable stir fry; making peanut-based sauces; incorporating them in soups and stews; and of course, eating peanuts by themselves as a snack.

Like all legumes, peanuts are among the most sustainable crops. Peanuts help minimize food waste. Like pulses, they can be dried and stored for relatively long periods of time without losing their nutritional value. Peanuts are a zero-waste crop on the farm as well. They act as a cover crop – the leftover plant matter is often reincorporated into the soil to feed the next crop planted – while providing an edible crop as well.

Native to Africa, peanuts were introduced to the U.S. in the 1700s and are now grown in nearly a dozen states. The U.S. produces nearly 10% of the world’s supply, but nearly all U.S.-grown peanuts are consumed domestically. According to the FAO, drought-resistant species of legumes can be of particular benefit to dry environments. A new survey by the National Peanut Board indicates that U.S.-grown peanuts have become even more water efficient through improved farming practices. It now takes 3.2 gallons of water to produce 1 ounce of shelled peanuts. By comparison, almonds require nearly 30 gallons of water per 1-ounce serving.

This site uses User Verification plugin to reduce spam. See how your comment data is processed.
These tattoos were much more than just traditional decoration. Mal på keramik hos kreavÆrk i middelfart.