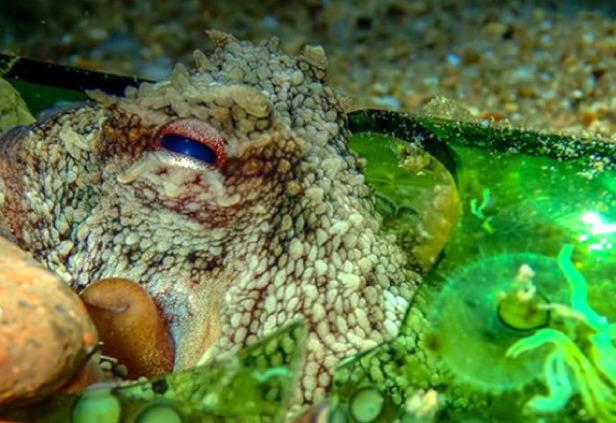 Octopuses Have Learned to Make Use of Ocean Litter, Study Finds

Whether it’s mimicking venomous creatures, or shooting jets of water at aquarium light switches to turn them off, octopuses are nothing if not resourceful. Now, an analysis of underwater images suggests octopuses are increasingly using discarded bottles, cans, and other human rubbish as shelter or as a sanctuary for their eggs.

The study — the first to systematically evaluate and characterize litter use by octopuses using crowdsourced images — analyzed hundreds of underwater photos posted on social media platforms and image databases or collected by marine biologists and diving interest groups.

The research, published in Marine Pollution Bulletin, documented 24 species of octopus sheltering inside glass bottles, cans, and even an old battery; burying themselves under a mixture of bottle tops and seashells; even carrying plastic items around while “stilt-walking” on two tentacles to conceal themselves from predators.

“The deep-sea records were extremely interesting, because even at great depths these animals are interacting with the litter,” said Maira Proietti of the Federal University of Rio Grande in Brazil, who supervised the research. “They clearly see that there’s a lot of litter around, and it can therefore act as a kind of artificial camouflage.

“It shows their extreme ability to adapt. They are very intelligent animals, and they will use what they have at their disposal to continue sheltering or walking around with protection.”

The octopuses seemed to show a preference for unbroken items, as well as darker or opaque containers, and the most common interaction recorded was using rubbish as shelter.

Proietti said, “While these interactions could seem positive for the animals because they are lacking natural shelters such as seashells, it is not a good thing to think that the animals may be using litter as shelter because the seashells are gone.”

Sheltering or laying eggs inside discarded tires, batteries, or plastic objects could also expose octopuses to heavy metals and other harmful chemicals, she said.

Urban Refuge: How Cities Can Help Solve the Biodiversity Crisis

This site uses User Verification plugin to reduce spam. See how your comment data is processed.
Visitors to the website can download and extract any location data from images on the website. Actualidad. Home modern - naga export.