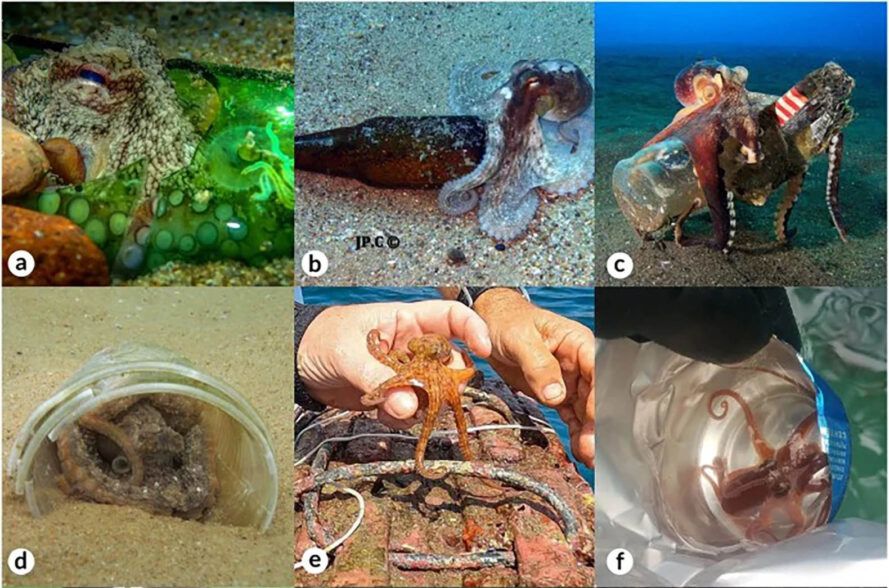 A new study published in the Marine Pollution Bulletin has found that octopuses are increasingly interacting with plastic and other waste materials in the water. While they have been spotted interacting with different types of litter before, there has been no study to authenticate it. The study led by researchers from Brazil and Italy is the first comprehensive observation of how the octopus interacts with this litter.

Before the study, images of octopuses hiding inside bottles or ferrying around discarded coconut shells circulated online. Such photos illustrate how waste that enters the ocean affects animals. Inspired by such images, the researchers behind the study wanted to learn more.

For the study, the researchers collected over 261 images of octopus interactions within littered environments. Taken by divers, the images were collected from all over the world. These images helped researchers determine what exactly the octopuses do with the waste.

Maira Proietti, one of the researchers from the Federal University of Rio Grande in Brazil, says that the interactions show the impact of litter on marine life. “The deep-sea records were extremely interesting, because even at great depths these animals are interacting with the litter,” said Proietti.

Researchers observed octopuses using trash as shelter and camouflage. Some octopuses were even seen hiding inside bottles. The researchers also noted that some octopuses repurposed objects such as plastic caps and lids.

The octopus is one of the smartest animals in the world, with the ability to find solutions even in the most complex situation. However, the researchers say these observations indicate trouble for the ecosystem. For instance, the creatures could be camouflaging in waste due to a lack of seashells.

Proietti stressed that “it is not a good thing to think that the animals may be using litter as shelter because the seashells are gone.”

Further, the actions taken by the octopuses could be dangerous to their health. For instance, they could get bruised by a glass bottle or exposed to harmful chemicals. One of the animals was even seen hiding in a dumped car battery.

This site uses User Verification plugin to reduce spam. See how your comment data is processed.
Classic italian panna cotta with strawberry sauce - the delicious recipes. Your future wedding dress is idealized by many people, but it does not necessarily fit your body and does not improve it. Til dig der har behov for vild adrenalin og action i ballerup.