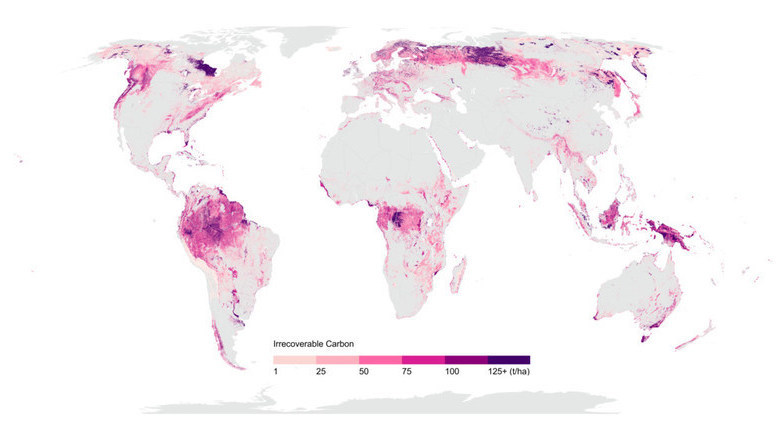 A new study maps out the old growth forests, peatlands, and mangroves that must be preserved to prevent catastrophic climate change. Though these areas cover only around 3 percent of land, they contain vast stores of carbon that, if unleashed, could not easily be recovered.

“The consequences of releasing this stored carbon would stretch on for generations, undermining our last chance to stabilize Earth’s climate at tolerable levels for nature and humanity,” said Johan Rockström, Conservation International’s chief scientist and co-author of the study.

The research builds on a 2020 study that pioneered the concept of “irrecoverable carbon,” which describes marshes, peatlands, mangroves, and old-growth forests that took centuries to form. If these ecosystems were destroyed, the carbon they contain could not be recovered in the mere decades humanity has left to prevent dangerous climate change.

Carbon stored in these ecosystems is 15 times greater than the total sum of carbon released by burning fossil fuels in 2020, according to the new study. More than half of the world’s irrecoverable carbon is not managed or protected, an important consideration as officials look to safeguard 30 percent of land area by 2030. The findings were published in the journal Nature Sustainability.

Key areas to be protected include old growth rainforests in the Amazon, the Congo, and Indonesia, as well as temperate forests in Russia, northern Canada, and the Pacific Northwest. The highest concentration of irrecoverable carbon is contained in mangroves, wetlands, and peatlands, such as the peat bogs of the British Isles. Over the last decade, many of these areas have been degraded, with large swaths cleared to make room for farms and pastures, or otherwise lost to logging or wildfires.

“We are at a pivotal moment for climate action — the science and the solutions are here, and so is the urgency,” said Monica Noon, a Conservation International scientist and lead author of the study. “Knowing that irrecoverable carbon is concentrated in a relatively small area of land can help guide the protection of ecosystems we now know are essential for Earth’s climate.”