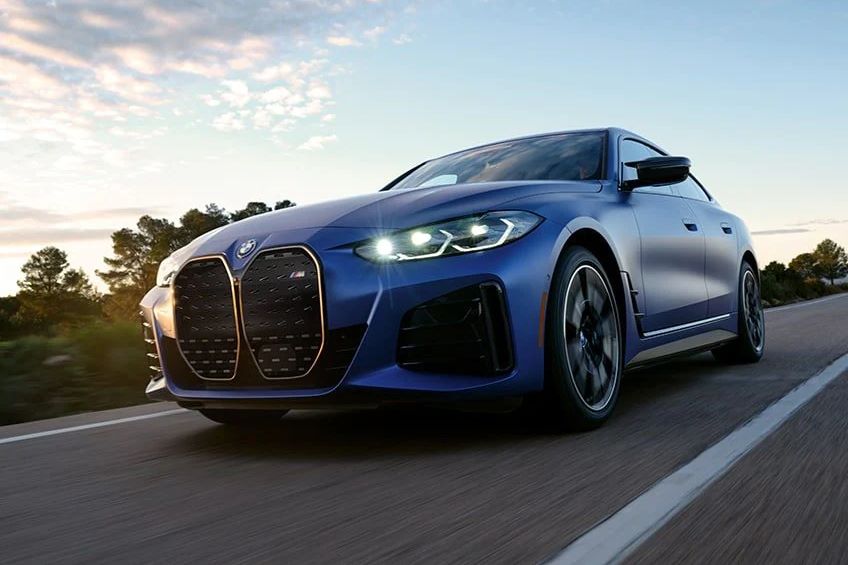 New Sports and Luxury EVs for 2022

Some of the world’s most expensive cars are getting an electric upgrade. Both Mercedes-Benz and Cadillac are releasing their first electric vehicles in 2022, along with startup Lucid Motors. And, old pros in EV manufacturing, BMW and Audi add more models to their all-electric lineup. In the last part of our four-part series about new all-electric vehicles for 2022, we’re exploring sports and luxury EVs.

Missing from this lineup is the eagerly awaited next-generation 2022 Tesla Roadster, now set for a 2023 release. According to Elon Musk, this will be the fastest car in the world and go from 0 to 60 in 1.1 seconds. Regardless of the Roadster’s delay, there are many other sports and luxury EVs for 2022. Existing models include the Polestar 2, Tesla Model S, BMW i3, Jaguar I-pace, and Porsche Taycan, but let’s explore some of the newest options.

Unlike other EVs in the electric “i” subbrand from BMW, the i4 sedan has more conventional styling. It features rear-wheel drive and a 335 horsepower motor. But, the M-badged model has all-wheel drive, 536 horsepower, and can go from 0 to 60 in 3.9 seconds. The 81.5-kilowatt battery allows a range of around 300 miles.

The first all-electric Cadillac is almost here and it’s a zippy luxury SUV. It can go from 0 to 60 in 4.3 seconds, has 334 horsepower, and has a 100-kilowatt battery. The Lyric luxury SUV will have a range of more than 300 miles and come in both a single motor, rear-wheel-drive version and a dual-motor, all-wheel-drive version.

This electric car shares engineering ties with the Porche Taycan including its innovative two-speed transmission for incredible acceleration and range. All-wheel drive is standard and the base model has a 469 horsepower drivetrain with dual motors and 522 horsepower with overboost. The RS e-tron GT goes from 0 to 60 in just 3.1 seconds.

The e-tron GT includes three years of free charging via the Electrify America network, a fast-charging network throughout the U.S. The vehicle’s driving range is just 232 miles — shorter than others in its class.

Two ways the Audi varies from the Porche are its chiseled appearance and higher price tag. Unlike some legacy automakers, Audi is no stranger to EVs and the e-tron GT joins others in its expanding all-electric fleet.

The starting price for this Germany-made car is $102,400 and it’s already in showrooms.

This stylish electric sport sedan won the 2022 Motor Trend Car of the Year award because the judges believe it shines in six key criteria: efficiency, value, advancement in design, engineering excellence, safety, and performance of the intended function. The Air Dream P edition has a tiny, power-dense motor that boasts up to 1,111 horsepower and 1,390 lb-ft of torque. And the Dream R edition has a record-breaking 520-mile range, leaving the competition in the dust. The runner-up to the Lucid Air for range is the Tesla Model S Long Range at 405 miles.

Plus, the electric drivetrain was developed in-house and the electrical system is bi-directional. That means electricity can flow in both directions; it can deliver “jump charging” to other EVs. The Lucid Air can also power a home during a power outage by drawing electricity from the battery, a feature that the electric Ford F-150 will also have. Combined with a luscious and spacious interior, this EV is both practical and fashionable. The Lucid Air has a starting price of $77,400 and came out in the fall of 2021.

This car is a very impressive feat for a start-up automaker. Lucid Motors is based in California and expects to produce 20,000 Lucid Airs in 2022. It is now working on its next model, the Gravity SUV.

Designed to be the new flagship luxury electric sedan in the EQ family, it is one of the fanciest EVs on the market, and it’s manufactured in Germany. The EQS is the first all-electric vehicle from the Mercedes-Benz EQ subbrand to be available in the U.S. and will soon be one of several Mercedes EVs in showrooms. According to the automaker, it will be one of the most aerodynamic vehicles on the market. One interesting feature is its glass-covered hyperscreen dashboard, which is an AI interface.

It is available in a 329 horsepower rear-wheel drivetrain or a 516 horsepower all-wheel-drive version. The latter can go from 0 to 60 in 5.1 seconds and its 107.8-kilowatt battery packs in 340 miles of range.

In addition to sports and luxury EVs, there is also a lot of buzz around the new electric SUVs and pickup trucks hitting the market. In particular, American start-up Rivian is releasing its first pickup and SUV in 2022 and the first all-electric F-150 is coming out. EV drivers have more options than ever in all classes of vehicles.