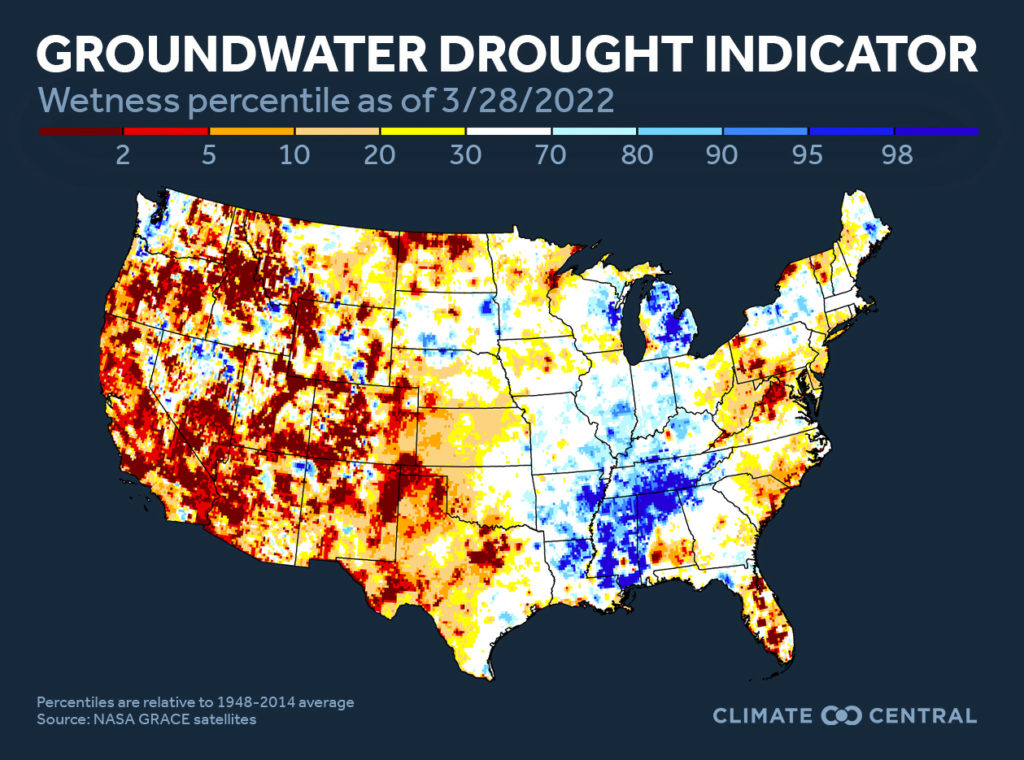 The ongoing drought in the U.S. West is expected to persist through this summer, raising the risk of water shortages and wildfires. While California, Arizona, and New Mexico are now facing the brunt of the drought, new research suggests that Colorado, Utah, and Wyoming will increasingly come to look like the Southwest as temperatures continue to rise.

In its latest seasonal outlook, the National Weather Service projects the drought, which began in early 2020, will continue across virtually the entire American West. Cooler waters in the Pacific are giving rise to fewer storms in the Southwest, while higher temperatures on land are drying out soil. In the last two years, average temperatures have been upward of 2 degrees F (1.1 degrees C) warmer across the West and more than 3 degrees F (1.7 degrees C) warmer in much of the Southwest.

“The dryness has coincided with record-breaking wildfires, intense and long-lasting heat waves, low stream flows and dwindling water supplies in reservoirs that millions of people across the region rely on,” University of Colorado climate scientist Imtiaz Rangwala wrote in The Conversation.

The number of days with “fire weather” — high heat, low humidity, and wind — has grown across much of the American West since 1973, according to an analysis from Climate Central.

The Southwest, including much of Southern California and Texas, has seen the biggest jump in fire weather. In New Mexico, which is currently battling the biggest wildfire in state history, some areas are seeing an additional two months of fire weather.

Going forward, such hot, dry conditions may become more common in the Rocky Mountain region as well. A new study finds that much of the upper Colorado River Basin may come to look more like Southwest as snowpack declines, snowmelt begins earlier, and higher temperatures dry out soil.

For the study, scientists at the Los Alamos National Laboratory in New Mexico used artificial intelligence to analyze climate models to identify areas most vulnerable to drought, such as the Green River Valley in the Rocky Mountains. The findings were published in the journal Earth and Space Science.

“Because of global climate change, areas of Colorado, Utah and Wyoming could have much less water, and future hydrologic conditions may more closely resemble those of the arid Southwest regions of the basin today,” said Katrina Bennett, a hydrologist at Los Alamos National Laboratory and coauthor of the paper.

On the Water-Starved Colorado River, Drought Is the New Normal