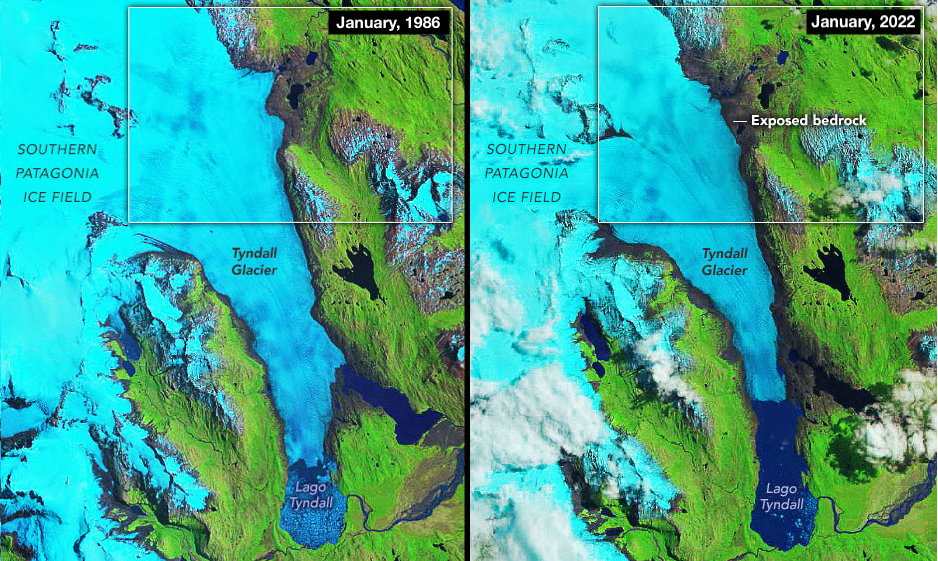 The retreat of Chile’s Tyndall Glacier has revealed a graveyard of ichthyosaurs, dolphin-like reptiles that roamed the oceans more than 90 million years ago.

The Tyndall Glacier is melting, with parts retreating by as much as 2 kilometers in recent decades, exposing long-hidden fossils. So far, paleontologists have uncovered the remains of 76 ichthyosaurs in bedrock left bare by melting, a trend highlighted in newly released satellite images from NASA comparing the glacier in 1986 and today.

“I’m certain that many of the specimens were under the glacier in the 1986 image,” Dean Lomax, a paleontologist at the University of Manchester. “To our knowledge, there is no other site in the world where so many exceptional fossils are being exposed due to a retreating glacier.”

Glacial melt has helped spare the fossils from being ground up by the slow movement of rocks and dirt beneath the glacier, scientists say. One particularly notable fossil, “Fiona,” a mother bearing several embryos, “would have been turned into powder if it had remained covered by the glacier a few more decades,” said Camilo Rada, a glaciologist at University of Magallanes in Chile.

Climate change is uncovering fossilized remains and human artifacts around the world as warmer temperatures shrink glaciers and drought saps lakes and rivers. Ice melt has revealed a World War I cave bunker in the Alps and Stone Age tools in Norway and the Rocky Mountains, while falling water levels have recently exposed a decomposed body in Nevada’s Lake Mead, a ghost village in Spain’s Alto Lindoso reservoir, and a Bronze Age city along the Tigris River in Iraq.

This site uses User Verification plugin to reduce spam. See how your comment data is processed.
Contactez. Statistics. Seo tools are very important to your online business to prosper fast.