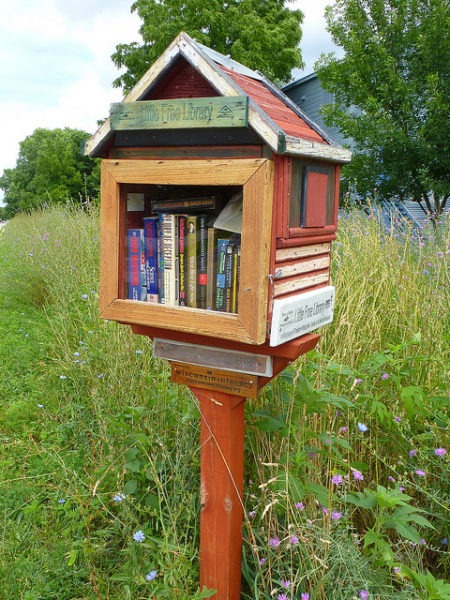 The sharing economy has grown significantly in recent years with everything from ride-sharing and bike-sharing programs to community tool libraries cropping up across the country. Participants in this new economy choose to buy less and consequently produce less waste, while at the same time engaging with their communities.

Libraries are a centuries-old example of the sharing economy, but since 2009, a new kind of library has been emerging in neighborhoods throughout the United States and around the world. You may have stumbled across a Little Free Library, a box that’s set up so people can share literature and information by taking or leaving a book. Little Free Libraries come in all shapes and sizes. Some even have unique architecture or serve as canvasses for paintings. Some libraries also have themes, focusing on books for children, adults, or gardeners or offering environmental field guides, like one Library at a nature center in Long Beach, California.

Inspired by the work of libraries throughout history as well as by “take a book, leave a book” collections in coffee shops, the founders of Little Free Library began constructing Little Libraries in Wisconsin in 2009. Todd Bol of Hudson, Wisconsin, built the first Library, which was shaped like a schoolhouse to honor his mother, a former teacher. Bol met Rick Brooks of Madison, Wisconsin, at a seminar on local economies and green practices, and the two teamed up to create what would eventually become the Little Free Library nonprofit organization. The group’s mission is to inspire a love of reading, build community, and spark creativity.

From the beginning, Little Free Library has incorporated recycled materials into the Libraries. The original models were all constructed with recycled materials, and in 2010, an Amish carpenter began constructing Libraries for Bol and Brooks using wood from a barn that was destroyed in a tornado. Today, the organization sells a variety of Library models for people who want to start a library but don’t want to build their own, as well as library kits that you can assemble.

Plenty of Little Free Library caretakers have gotten creative, though, and upcycled their own materials to make eye-catching homes for books. People have used old construction materials, cabinets, bamboo, old mailboxes, and even old TV sets to build Libraries. Their projects don’t just promote sharing; they also keep old materials out of the trash. In fact, if you enjoy DIY projects, plans and blueprints submitted by other Library owners are available for you to download and use. Start Your Own Library

The nonprofit encourages people to start their own Little Free Libraries and provides helpful instructions for how to do so. Those interested are encouraged to spend time looking for a good location for the library and to take zoning laws into consideration. Little Free Library suggests placing the Library on private property and ensuring it won’t impede activities like snow removal. Each Library needs to have a steward to care for it and check in on the book collection regularly.

Libraries can be bought or built, but if you don’t have money or building skills to dedicate to your project, you do have options. Local community groups might be willing to sponsor a Library. You could also try fundraising; many Little Free Library Kickstarter campaigns have successfully raised money for Library-building projects.

This site uses User Verification plugin to reduce spam. See how your comment data is processed.
A family history of diabetes. Live.