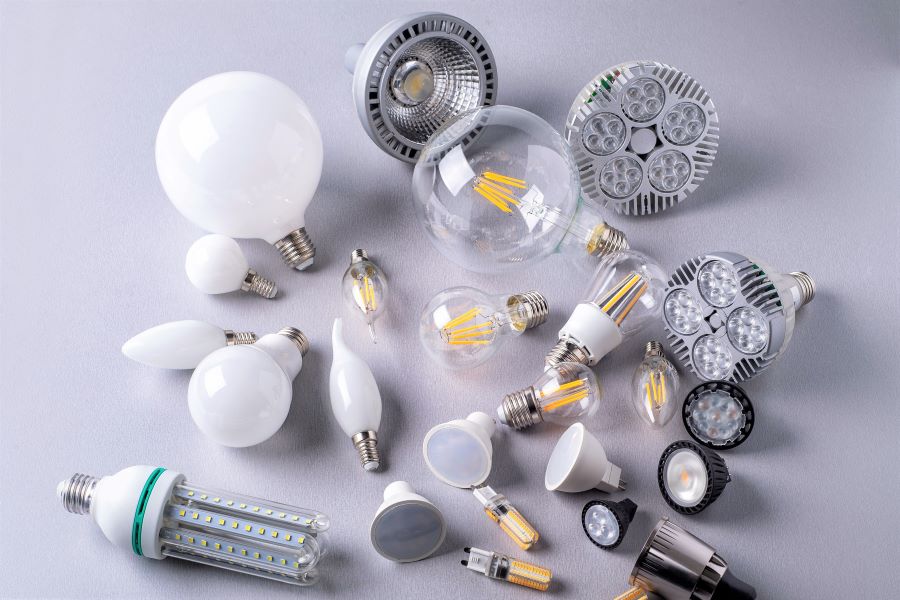 Light Up With Energy-Efficient LEDs

LEDs are the darlings of the lighting world. If lightbulbs were in high school, LEDs would be universally popular. They’re user-friendly and help save money. LEDs are versatile. And they are a positive step toward making a home energy efficient.

LEDs (light-emitting diodes) for residential use consume at least 75% less energy and last up to 25 times longer than incandescent bulbs, according to the U.S. Department of Energy. It’s fair to say they’re hot. Hot as in popular. But they are not too hot to touch — which is another enticing trait.

The U.S. Department of Energy (DOE) recently finalized new energy-efficiency rules that reverse a Trump-era decision to keep incandescent bulbs on the market. So you will now have a new set of choices when shopping for lighting.

The DOE projects that over the next 30 years, eliminating incandescent bulbs will reduce U.S. carbon emissions by 222 million metric tons per year. That’s equivalent to the emissions generated by 28 million homes in one year, according to the agency. Even if the price per LED bulb is slightly higher than incandescent bulbs, LEDs last longer, offsetting that expense, reported the American Lighting Association, an industry organization.

What This Means for Your Wallet

In addition to saving energy for the planet, replacing incandescents with LEDs likely saves dollars for residents, especially in utility fees. “Lighting accounts for around 15% of an average home’s electricity use and the average household saves about $225 in energy costs per year by using LED lighting,” the DOE said.

Another potential financial — and practical — value of LEDs is how much heat they generate, which isn’t much. Incandescent lightbulbs release 90% of their energy as heat and CFLs release about 80% of their energy as heat. LEDs are also safer to handle because they release so little heat. Using LED lighting may help lower air conditioning costs compared to incandescent and CFL lighting.

Variety and Features of LED Lights

LED lights are offered in various formats, including track, tube, pathway, solar, and string lights. Some are dimmable or work with daylight sensors and motion sensors. Dimmable lights, as well as timer lightbulbs that automatically turn off after a given amount of time, offer an added element for saving energy.

When choosing LED lights, focus on the lumens, or brightness, produced instead of watts. The higher the lumens-to-watts ratio, the more energy-efficient the bulb. Look for lumens data on the Lighting Facts label, which is on all packaging for lamps and lightbulbs.

Here are their guidelines to help you replace incandescent bulbs with energy-efficient bulbs (in this case, LEDs) of comparable brightness:

American Lighting Association offers information about a different element of the Lighting Facts label, the warmth or color of the light produced. Color information is represented as light appearance. For example, a bulb that provides a warm appearance based on a rating of 2700 to 3000 Kelvins (“K”), will approximate the light from an incandescent bulb. The higher the Kelvin rating, the more white or blue the light will be.

Select the right lightbulb that suits the vibe, The Home Depot offers these handy recommendations:

Now that the wasteful incandescent lightbulb is passing into history, you can redesign your home’s look and pick the lighting that creates the mood you want, all while saving hundreds of dollars a year on your electricity bill. Who says progress can’t be fun?