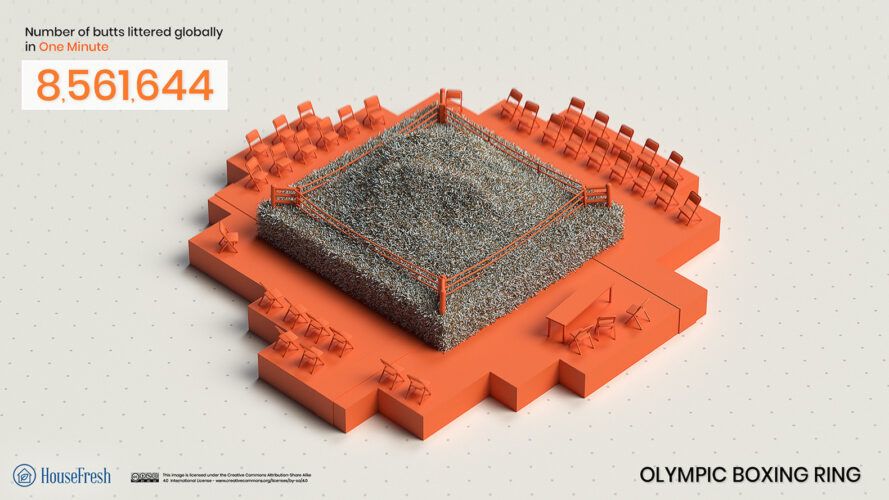 In one week, cigarette waste can fill two White Houses

Depending on where you live, seeing a burnt cigarette butt on the ground can invoke a range of responses. In some places, a person might feel a sense of rage, while in other areas, even a littering of butts on the ground will fail to elicit a response. Regardless of how ubiquitous discarded cigarette butts are where you reside, when the sheer number of them on the planet is calculated, the results are not only difficult to ignore, they’re shocking.

Housefresh, a “team of experts in keeping your house clean and fresh,” dug into the subject by collecting data from a variety of sources and converting it into infographics. The result is a visual representation of the waste created by cigarettes per minute or on a daily, weekly, monthly or annual basis.

Related: How Finland plans to completely eradicate tobacco use by 2040

The team chose iconic locations in the representations to provide a connection viewers can relate to. For example, the study reports, “In one minute, humans dump 8.5 million cigarette butts, equal to 50 cubic meters — or an Olympic boxing ring.” The visual of a large boxing ring filled each minute by smokers around the world is certainly attention-grabbing.

The next visual multiplies the one minute into the pollution caused in a 24-hour window. In one day, 12.3 billion cigarette butts are dumped, which is equal to 72,522m3 — a bit bigger than the Lincoln Memorial.

Expanding that snapshot into a week’s worth of cigarette waste means burying another notable building. “In one week, we dump 86.4 billion cigarette butts — that’s 509,050m3 or TWO White Houses.”

The use of these visuals allows us to see the exponential effect of what seems like a small item, when seen as a whole. Two White Houses full of cigarette butts in a single week?

It gets worse, of course. In a month, the environment is pummeled with cigarette waste. According to the study, “In one month, we dump 375 billion cigarette butts, which equals 2,205,882m3 or one Capitol Building.”

To represent the cigarette dumpage on an annual basis, researchers had to go bigger. They said, “In one year, we dump 4.5 trillion cigarette butts, equaling 26,470,588m3 and enough to cover New York’s Central Park.”

Obviously, the pollution created by cigarette butts is unpleasant to the eye and damaging to the environment. Although tobacco itself comes from a plant, the butts are made from a type of plastic that is neither biodegradable or recyclable. Plus, they contain many chemicals that then leach into the soil and water. Smoking is also a primary contributing factor to major health issues, including lung cancer.

Cleaning up the mess left by smokers is an expensive endeavor. It’s estimated an annual $4 billion (taxpayer) dollars in the U.S. alone. Plus, cigarettes are a common cause of home and forest fires and can be toxic to animals. The Housefresh report refers to a study that concludes, “One butt in a liter of water will kill half the fish.”

At the top of the article, we alluded to geographic location having an impact on people’s perspectives around cigarette waste. The fact is, there are huge variations in the prevalence of smoking from one region to another. For example, in Andorra, nearly half of all high school students admit to smoking at least occasionally. Additionally, the average number of cigarettes smoked daily for the population as a whole is 17. The European continent is the largest contributor to cigarette waste, with the average citizen disposing of over 1,800 butts every year. In contrast, smoking is still relatively obscure in Africa with a country like Ghana disposing of an average of 41 butts per person.

According to the report, Canadians smoke the most in North America, but the U.S. isn’t far behind. “Up to 40% of items collected in American litter clean-ups are butts, which are the most littered item on U.S. roads, drains, parks and beaches.”

There are also high smoking rates throughout regions of Asia and specifically in some islands in the South Pacific. They maintain the highest smoking rates in the world.

The cultural and financial variations around the world make a notable impact on smoking rates. Education about the dangers of smoking also varies wildly. Some countries are making good progress in reducing smoking rates while other countries are just starting the discussion. For example, Andorra just recently banned tobacco advertising and smoking in bars.

The methodology for the study required gathering data from using Omni Calculator, and is based on 170 cigarettes filling one liter of volume. Global numbers of discarded cigarettes were sourced from Science Direct. To calculate the cubic volume of the objects and landmarks in the report, the team looked to Wikipedia and the Google Maps distance measurement tool. Global smoking rates were sourced from the World Bank and Global cigarette consumption was sourced from Tobacco Atlas.