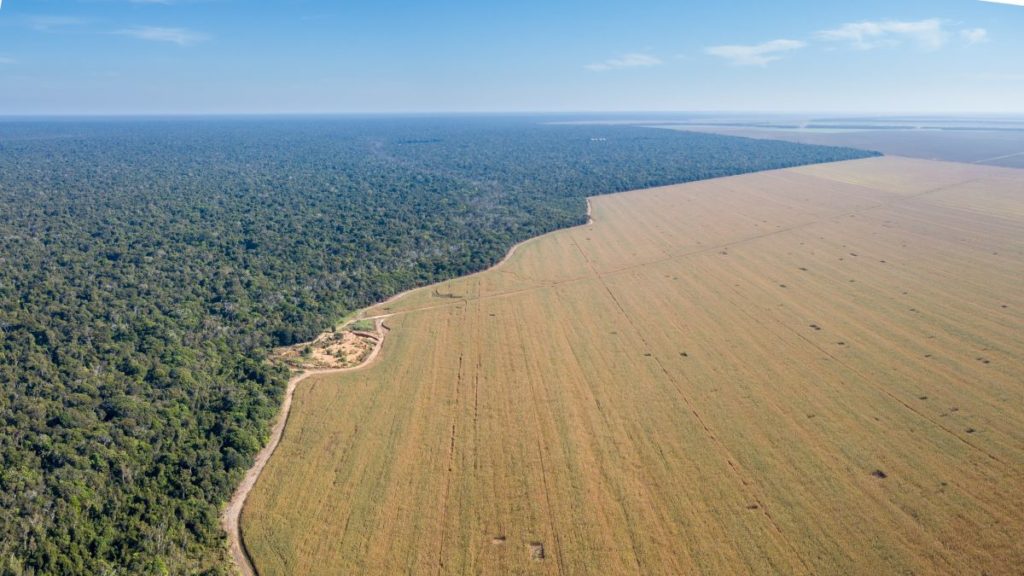 How To Avoid Soy-based Deforestation Impacts in Your Diet Soy-growing industrial farms carry a heavy environmental footprint, and a new study from Our World in Data shows that they also indirectly drive deforestation in Brazil. This popular plant shows how the complex human food supply can put a planet-harming, soy-based meal on your plate even when it claims to be vegan. Where our food comes from matters a lot.

Most of the world’s soy crops end up feeding cattle, pigs, and chickens. Only 7% of soybeans grown are used in human foods, and most soy used by U.S. companies is domestically grown. However, if you buy meat that’s grown in Brazil or Argentina, or U.S. beef, pork, and chicken fed with Brazilian or Argentine soy, you are contributing directly or indirectly to CO2 emissions and deforestation.

“Expanding soya cultivation was a major reason why 2004 saw the second-highest level of deforestation ever recorded across the Amazon basin rainforests,” author Tony Juniper reported in 2019. “As soya prices went up, land rose in value, and soya cultivation was moved into new areas across the southern and eastern fringes of the Brazilian Amazon states of Para, Mato Grosso, and Rondônia. It caused, in effect, a ‘Soya Rush’ to take hold.”

Where the Soy Grows

The U.S. is the largest producer of soybeans in the world and it is our number-one agricultural export. Brazil comes in at a close second, and Argentina and China are also large producers, but China exports very little of its soy crop. In Brazil, Argentina, and the U.S., soy is used to feed livestock.

While soy is vastly superior to meat proteins in environmental terms — it produces from 1.5% to 22% of the CO2 compared to an equivalent amount of beef and consumes only 6% of the water. But where the soy comes from makes a big difference in your environmental impact. Brazil has cleared forests relentlessly for several decades as it increased soy production from 2 million tons in 1971 to more than 117 million tons in 2018.

Hannah Ritchie of Our World in Data examined Brazilian deforestation and found that much of the land is initially cleared for grazing, but some of it becomes soy farmland later. The Cerrado region of Brazil, which was ravaged by wildfires in 2020, is home to 48% of Brazilian soy crops. In the Amazon, where 13% of Brazilian soy is grown, deforested land is typically converted to pasture first. Only later might a soy farmer move in.

“Numerous studies have reached a very similar conclusion: it is pasture, not soybean production that is driving most deforestation in the Brazilian Amazon,” Ritchie writes. “But, this only looks at the direct drivers of deforestation. In other words, the cutting down of forest today to make space for cropland for soy production.”

If you eat meat grown in Brazil or Argentina, it certainly carries a heavy carbon footprint and traces of deforestation activity. So, how do you avoid buying meat or soy products with an earth-harming impact? You can look for non-soy meat and milk alternatives to avoid the problem entirely or make informed picks at the grocery store to eliminate most soy impacts from your diet.

Very little farmland is added to U.S. agriculture these days. U.S. soy farms are aware of Brazilian soy’s bad rap, but that does not mean they are embracing responsible organic growing practices. Your soy burger may be grown using chemical fertilizers, but it is not likely to be grown on recently deforested land. Buying domestically also lowers the transportation-related CO2 emissions in your vegan or vegetarian meals.

In January 2021, U.S. soy producers announced an initiative that will provide sustainability assurances for soybeans grown domestically in compliance with environmental law and with protections for wetlands, waterways, soil, and farm labor. The Sustainably Grown Soy logo could appear on soy-based products soon, but it is not compulsory. The soy industry estimates that only 41% of the soy grown in the U.S. could qualify for the label, and that soy would have to pass additional reviews.

However, soy-based foods do not have to disclose where their ingredients are grown, nor whether they were farmed organically. It’s up to shoppers to research the environmental impact of their meat and milk alternatives.

The simplest rule for eliminating your CO2 and deforestation footprint is to avoid meat, as the animals are chiefly fed soy products. Even chicken, which has a very low carbon footprint compared to other meats, is fed soy at many industrial farms. Look for grass-fed and free-range meats, if you are going to eat animal flesh — the industrially grown stuff is an environmental catastrophe that gets worse every year.

We looked into which companies use soy in meat alternatives and identified a few soy-free options that stand out as more sustainable and insulated from deforestation activity.

This article contains affiliate links to products that, if you make a purchase, support Earth911’s editorial mission.

Beyond Meat, which makes soy-free, plant-based alternatives to beef and sausages, is a safe bet to avoid deforestation impacts. The company uses non-GMO pea, fava bean, and brown rice plant proteins instead of soy.

Quorn is a soy-free alternative for hamburger and chicken dishes made with a mycoprotein in mushrooms. Some Quorn products contain egg whites, so vegans will want to choose another option.

The maker of popular beef, pork, sausage, and chicken alternatives, Impossible Meats uses soy in products. But the company provides a lifecycle analysis of its products’ environmental impacts. Impossible embraces genetic engineering, including the use of genetically modified soy protein grown in Iowa, Minnesota, and Illinois, which follow rotation-based, no-/conservation-tillage practices. The company’s unique heme molecule-based approach to making faux meat “bleed” like traditional burgers makes Impossible a favorite for people transitioning from a meat-centric diet.

Tofurkey products are made with responsibly grown domestic, certified organic soybeans, according to the company’s website.

MorningStar Farms offers a variety of patties, sausage, chicken, and crumbles alternatives using non-GMO soy primarily sourced from U.S. farms. Kellogg, which owns MorningStar Farms, responded, “We do not purchase soy products from tropical deforested regions.” It does purchase some of its soy from “approved soy suppliers” who pass its rigorous screening process in Canada, China, and Brazil.

Gardein offers the widest selection of options in plant-based alternatives, with beef (including jerky), chicken (and wings), sausage, and fish meals made with non-GMO soy. It is also available with other plant proteins than soy. Conagra, the parent company of Gardein, confirmed by email that 95% of its products are prepared in the U.S. and that it uses only “identity-preserved” soy proteins, which ensures that the source is identified and compliant with U.S. federal food safety rules. However, they did not confirm, after a series of questions, that all soy used in Gardein products is sourced from farms that have not participated in deforestation.

Yves Veggie Cuisine, which makes deli meat (salami and ham) and sausage alternatives, confirmed that it uses a carefully monitored soy sourcing process to ensure its soy and other ingredients. It sometimes sources ingredients from other regions but only those that meet U.S. food safety and its standards. But Yves Veggie Cuisine did not confirm it does not purchase soy from farms located in recently deforested regions.

LightLife, which makes a wide range of meat alternatives — including hot dogs, bacon, sausage, and ground meat-like crumbles — uses soy in its products but does not disclose where and how it is grown.

Boca makes a variety of meat-patty alternatives — including beef, turkey, and chicken substitutes — using soy as a key ingredient. The company does not disclose where it sources soy proteins.

Tempeh is a generic term for a fermented soy product developed in Java using a fungus to ferment the soy and produce a cake with a nutty flavor. Many companies make variations on tempeh, including soy-free tempeh.

Tofu is the traditional Chinese soybean curd used for centuries in its cuisine. Because tofu is made and sold globally, it is difficult to track the source of the soybeans used. Seek out organic tofu made locally for the least impactful meal.

Textured soy protein, often referred to as texturized vegetable protein (TVP), is a widely used meat-substitute ingredient in snacks and meals produced by processing soy protein — it is a highly processed food and often used to supplement meat products. Like tofu, TVP is produced in many regions and it is difficult to determine whether the soy used came from deforestation-intensive regions like Brazil or Argentina.