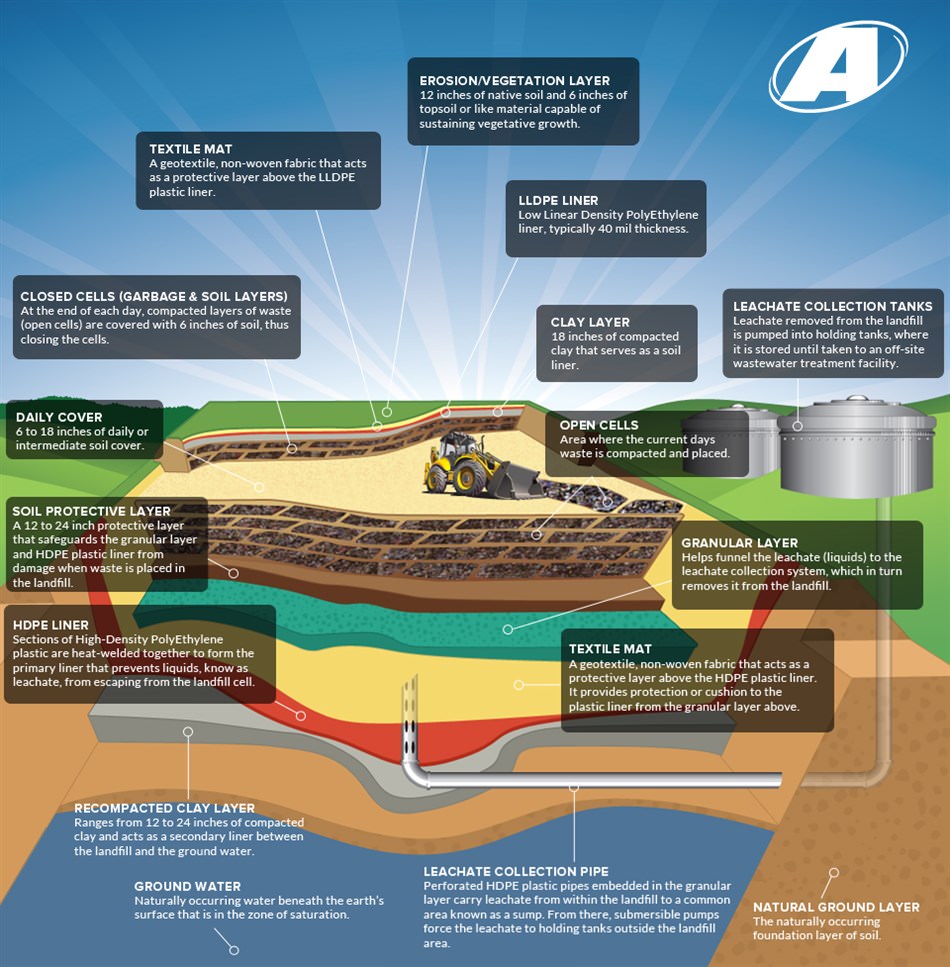 Humans create a lot of waste, but when you throw something away, how much do you know about where it goes or how it’s handled? This article is the second in a five-part series that explores what happens to the tons of materials we discard.

Around half of the garbage generated in the United States ends up in the landfill — and these days, more than a little of the recycling gets rerouted there as well.

Thinking about all that waste going to the dump can be depressing, but it’s is not quite the environmental nightmare many environmentalists think. Here’s some background on the modern sanitary landfill and how it works.

Humans have been dumping their garbage for as long as they have been generating it.

Prehistoric middens are important sources of information to archaeologists and anthropologists. Ancient Rome had municipal waste collection. But the first municipal sanitary landfill was built in Fresno in the late 1930s.

Dumps proliferated in the U.S. throughout the mid-20th century. Some of them, like the one in Fresno, were true sanitary landfills — that is, they layered refuse and dirt in trenches, compacted them both, and then covered the filled areas each day to minimize rodent and debris problems. Some of them lined the holes or trenches with clay before filling them in order to minimize leaching. However, many of them were no more than an open hole in the ground that was covered with dirt only when filled — they were real dumps.

In 1965, the federal government established an office to manage garbage with the Solid Waste Disposal Act. This act, with many subsequent emendations, still governs waste disposal in the U.S.

By the mid-1970s, states were required to establish waste management regulations. Today, the Resource Conservation and Recovery Act (RCRA) creates the framework for the proper management of all types of solid waste. Subtitle D of RCRA establishes the stringent design, operation, and closure requirements for sanitary landfills. Subtitle D does not allow new landfills to be built in environmentally sensitive areas.

A modern sanitary landfill is a complex structure that isolates trash from the surrounding environment until it becomes inert. Landfills comprise a bottom liner made from clay and durable synthetic plastic; a leachate collection system to remove liquids; a stormwater management system that keeps surface water from flowing into the garbage; and a methane collection system that removes landfill gas as it is generated.

The leachate, stormwater, and gas collection systems are constantly monitored. Landfills are required to budget for monitoring and maintenance for decades after closure to ensure that no harmful chemicals escape.

Landfills are divided into sections, called cells, that are filled and closed sequentially. Cells can be anywhere from 2,500 square feet up to 20 acres or more, depending on the size of the landfill. Nowadays, the tendency is toward larger cells and landfills.

When a new cell is built, the hole is lined with 2 feet of compacted clay, a durable plastic liner, and a nonporous geotextile membrane. That outliner lining is covered with a layer of granular material that helps funnel liquids into a leachate collection system. Up to two feet of soil is layered on top of that before garbage is added. Often, the first layer of garbage will comprise special materials such as old mattresses, to further protect the lining.

Once the cell is constructed, municipal solid waste is dumped inside and run over by compacting tractors. At the end of each day, the garbage must be completely covered to minimize odors, deter pests, limit rainwater runoff, prevent waste fires, and discourage scavenging. Daily cover most often consists of six inches of soil. This can fill up a cell more quickly, so alternate daily covers, such as geotextile cloth or even certain types of waste like ash or tires, are sometimes used to maximize efficiency. Wells and trenches for collecting landfill gas are installed at regular intervals as the landfill fills.

This diagram from Advanced Disposal illustrates the elements of a modern sanitary landfill:

When the cell is completely full, it receives a final cover, or cap, much like the bottom liner. The cap will be further covered by topsoil, which will be seeded with vegetation for the duration of the decades-long post-closure monitoring period.

By far the largest environmental impact of landfilling is the production of landfill gas (LFG).

Although landfills are designed to minimize decomposition, organic materials do eventually break down in a landfill. When they do, LFG is the byproduct. LFG is roughly half methane and half carbon dioxide, and as such, it is a powerful greenhouse gas. All landfills are required to collect LFG. At most landfills, the collected gas is burned off at flare stations, making landfills the third-largest source of human-related methane emissions in the United States.

Nevertheless, LFG can be utilized to make landfills greener. Instead of burning it, some landfills are converting the LFG they collect into usable energy. Sometimes the collected gas is used to power boilers or furnaces, or it can be refined into renewable natural gas. Most often, it is used to generate electricity.

Whatever the end use, LFG-to-energy projects can capture 60% to 90% of the LFG generated at a landfill and displace the same amount of energy from nonrenewable sources.

Old landfills, which were unlined or only lined with clay, which could crack, also did not set aside money for post-closure monitoring. As a result, many continue to leach chemicals into nearby soil and groundwater. Current landfills are much better at containing and monitoring their contents. But there is always a risk of future failure, and there is some evidence that all landfills leak.

Modern landfills are huge and are constantly improving their ability to compact waste, but eventually, even the largest, most efficient landfills will be full. When existing landfills run out of room, finding space for new ones may be impossible.

Landfills must be sited in areas with safe hydrogeological features — that is, away from faults, wetlands, flood plains, and other sensitive areas. They require vast rural sites and few communities are enthusiastic hosts to waste disposal sites of any kind.

When it comes to disposing of waste, the modern sanitary landfill is hard to beat. But it still has environmental impacts. No disposal method can ever be perfect, because however cleanly we dispose of things, all disposal is waste.

The dump may not be the dirty place we imagine, but it is still impossible to ever truly throw something away.

Read part three of this five-part series, How Commercial Composting Works. Originally published on October 22, 2019, this article was updated in December 2021.