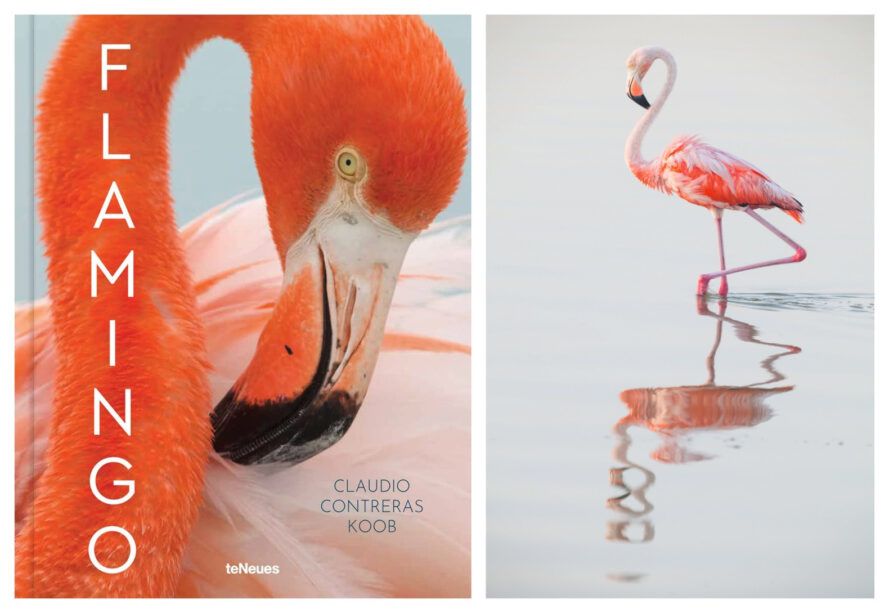 They’ve been called pink unicorns and their likenesses adorn lawns all across the U.S. We’re talking about flamingos, those elusive and vibrant birds that have earned a cult following. Biologist and Photographer Claudio Contreras Koob talked to Inhabitat about his gorgeous new coffee table book “Flamingos,” which has just been published by teNeues. “Flamingos” contains more than 120 photographs of the magnificent birds and gives readers a glimpse into remote flamingo colonies.

Koob studied biology at the National Autonomous University of Mexico. He’s been a professional photographer for more than 20 years nationally and internationally, and doing his part to promote conservation. His awards include Wildlife Photographer of the Year, Nature’s Best and Asferico. Here’s what he has to say about our pinkest feathered friends.

Inhabitat: How did you get so interested in flamingos?

Koob: My father comes from the Yucatan in Mexico so since I was four years old, I have been regularly going to the Yucatan coast. There, we would see the flamingos’ colony in the distance, deep in the wetlands. We would scream with joy every time we saw them. It’s such an iconic bird. As a kid also, once I was with a friend in a boat and a band of flamingos stretching for what seemed to be kilometers flew east along the coastline. We followed them for a while, and I was ecstatic. Now, I know we were witnessing the migratory movements towards their reproductive colony.

Inhabitat: Tell us about some of the places you’ve gone to see flamingos in the wild.

Inhabitat: What are the challenges of photographing flamingos?

Koob: By far the biggest challenge is to be able to get close to them. They live in muddy, slimy wetlands or in some very salty pools, and you just cannot walk to them and expect to take your images. It is easy to scare them, and once one of them enters in panic mode, all others follow suit. By not taking the time, you could create havoc in a colony.

Two things that I learned was that a very slow approach, covered in camouflage, worked very well. Flamingos tolerated my presence if I really put lots of time into approaching them. While in a boat, I could get close to them by not whispering and not moving at all for a long time. They would forget about the boat and encircle us as if we were a rock in the middle of the lagoon.

Inhabitat: What have you learned about flamingos that surprised you?

Koob: I was not aware about the production of crop milk in their gut. Crop milk is a blood red substance that both parents produce to feed the chick from beak to beak and it works miracles in the little birds. This was one of the most important images to make while doing the portfolio.

Inhabitat: Tell us a little bit about your book.

Koob: It’s a celebration of the beauty and magnificence of these birds, a celebration of life. I tried to cover all aspects of the flamingo life cycle: feeding, bathing, migration, courtship, life in the colony, chick rearing, etc. to present a portfolio that allows us to understand the complex life that flamingos go through.

I think that most of the people that have been fortunate to see a flamingo in the wild, have only been able to view them feeding or flying in the distance. I hope my book can shed some light into aspects of flamingo life that the viewer never even expected, to create a sense of wonder and make the viewer care about flamingos in general as well as caring about the threatened wetlands where they live.

Inhabitat: What do you think people should know about flamingos?

Koob: Though their slender bodies can show them as a skinny, fragile bird, flamingos are really tough. They can survive and thrive in very salty environments, where there is less competition for food, since other birds cannot handle the excess of salt. But they also are very vulnerable because of the threatened environment where they live. Wetlands generally are not treated with the respect that is due to them. We humans encroach on them, pollute them and there are also warning signs about coming dangers due to climate change. Flamingos are very well liked by people, they are an umbrella species, one that, by being protected in their habitat, also protects countless life forms around them.

When you purchase through links on our site, we may earn commissions at no cost to you.