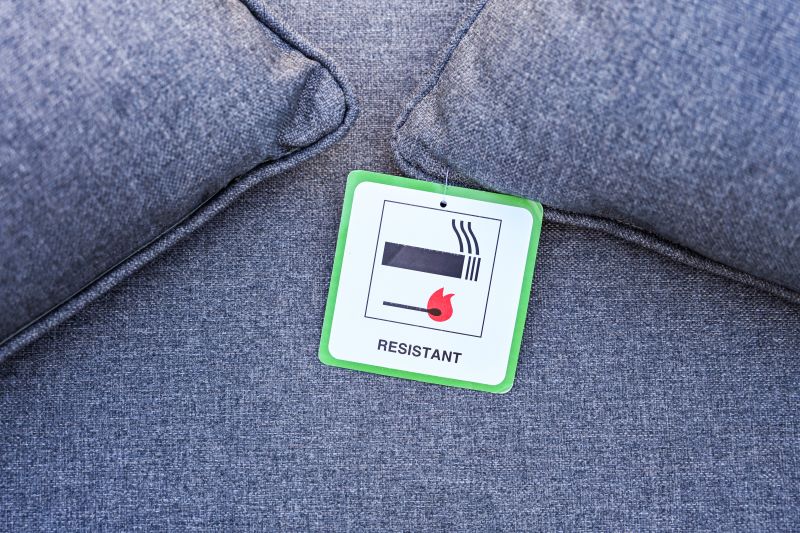 Flame Retardants: Toxicity in the Name of Safety

Safety is a good thing. But sometimes things we do in the name of safety create more hazards. Flame retardants are intended to slow the spread of a fire and allow for additional escape time. They began to be used extensively in all kinds of products in the 1970s to meet flammability standards set to increase public safety. With growing awareness of the health risks associated with many of the chemicals, some regulations changed. But harmful flame retardants are still everywhere, and they really shouldn’t be.

What Are Flame Retardants?

“Flame retardant” describes a chemical’s function – to make a product less flammable – but doesn’t say anything about the chemical itself. Not all of them are health concerns. But halogenated fire retardants (HFRs), a broad class of flame retardants containing chlorine or bromine are on the Red List. They are persistent, bioaccumulative toxins with adverse effects on neurological development and reproduction. They can cause thyroid hormone disruption and possible liver toxicity. When burnt, they release dioxins and furans, which are known carcinogens. HFRs include PBDE, TBBPA, HBCD, Deca-BDE, TCPP, TCEP, Dechlorane Plus, and others.

Which Products Contain Them?

Even though HFRs are on the Red List, and certain HFRs are banned, others can be found in a frightening variety of products. HFRs are found in insulation (virtually all foam insulations contain HFRs), myriad other foam products, tents, electronics, and upholstery — including in children’s car seats. Over time and with use, flame retardants release into the dust and air. Inhaling and ingesting contaminated dust is the most common exposure pathway. Flame retardants escape into the environment with laundry water, where wildlife can be exposed long after the chemicals leave your home.

Getting Rid of Flame Retardants

Some of the worst flame retardants are no longer used. Manufacturers voluntarily stopped producing two kinds of PBDEs (Penta-BDE and Octa-BDE) in 2004. After Washington state banned a third PBDE (Deca-BDE), manufacturers stopped producing, importing, and selling it in the U.S. in 2012. For decades, furniture cushions used halogenated flame retardants to comply with the 1975 California flammability standard TB 117. That standard was revised in 2014 so that new furniture has increased fire safety without the need for flame retardant chemicals. However, it is possible that these chemicals are being used in other countries and entering the United States in finished products. The safety of many of the chemicals that have replaced HFRs is unknown.

Although it may not be possible to avoid flame retardants entirely, when remodeling or building a new home, look for safer building materials. Many products manufactured before 2014 that contain halogenated flame retardants are still in use in people’s homes. While reuse is usually the best course for old furniture, replace the foam first to avoid creating ongoing hazards in someone else’s home. Unfortunately, recycling options are limited at best for the old foam. Landfilling is the safest disposal option because burning or incineration can release toxins into the air.

Many products no longer contain any added flame retardant chemicals. Read the flammability label carefully when buying upholstered products. Labels should identify any added chemicals. Boron is not an HFR and is a suitable alternative for many applications. If you have an older upholstered or foam-containing item that you want to keep, any U.S. resident can submit a sample of polyurethane foam (PUF) for testing by using the submission form on the Duke University website.

For many other product types, like insulation, there is a healthy selection of choices that do not contain harmful flame retardants. When purchasing electronics, look for TCO certification to ensure that only non-halogenated flame retardants reviewed by GreenScreen® for Safer Chemicals are used.

HFRs are persistent chemicals and were widely used in the past. That means the dust in your house probably contains HFRs. Dust and vacuum frequently with a damp cloth and a vacuum with a HEPA filter. Wash your hands after cleaning and before eating to avoid ingesting the dust.

Children may be particularly vulnerable to the toxic effects of chemicals because their brain and other organs are still developing. Hand-to-mouth behavior and proximity to the floor also increase their potential exposure to flame retardants. Researchers have confirmed that children have higher concentrations than adults of flame retardants in their bodies. However, the Code of Federal Regulations at 16 CFR Part 1615 for children’s sleepwear sized 9 months to 6X, and 16 CFR Part 1616 for children’s sleepwear sized 7 through 14 require children’s sleepwear and loungewear to pass flammability testing to self-extinguish if a flame from a candle, match, lighter, or a similar item causes it to catch fire. Read labels carefully, and consider letting kids sleep in comfortable clothes instead. Just be sure to increase your home fire safety protocols as well.