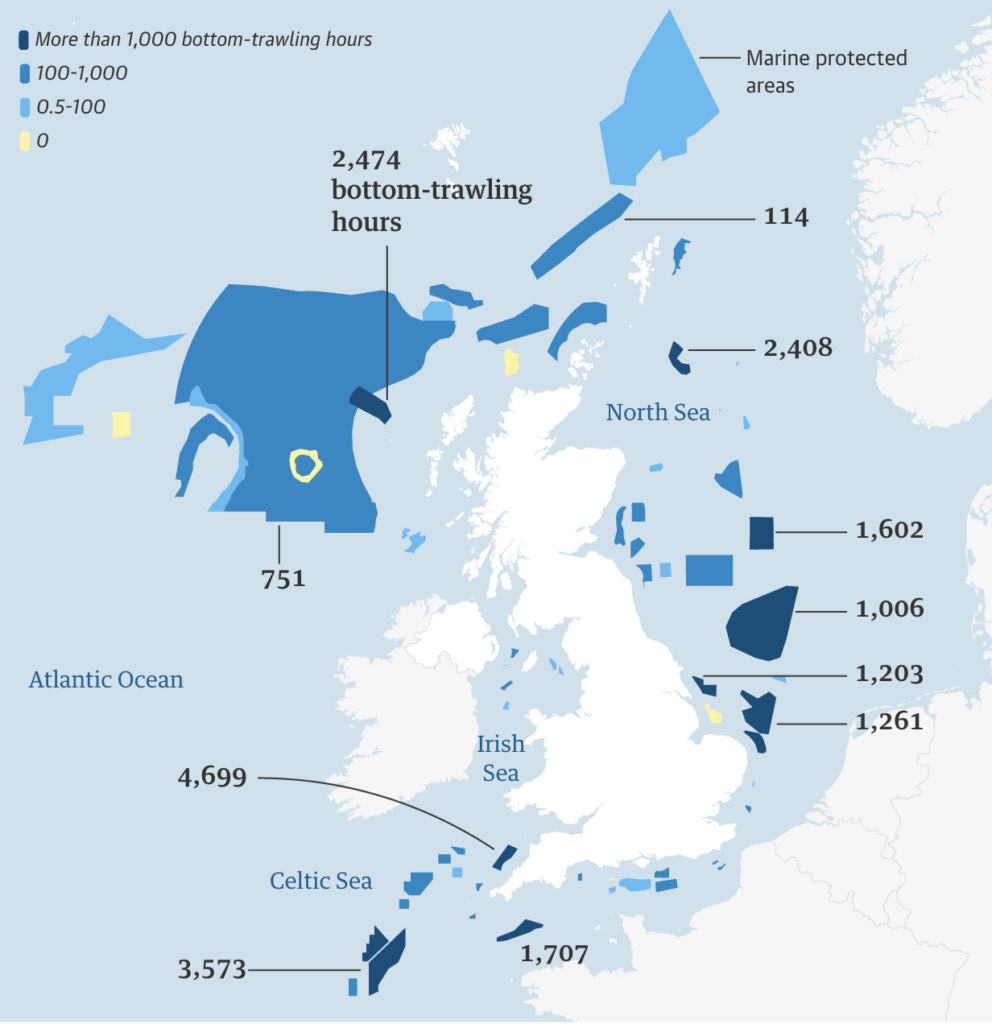 More than 90 percent of Britain’s offshore marine protected areas (MPAs) are still being bottom-trawled and dredged, two years after an analysis of the extent of destructive fishing exposed them as “paper parks,” according to data shared with the Guardian.

The UK’s network of marine parks, set up to safeguard vulnerable areas of the seabed and marine life, is a cornerstone of the government’s target to protect 30 percent of ocean biodiversity by 2030.

But an analysis of fishing vessel tracking data from Global Fishing Watch and Oceana, a conservation NGO, found that fishing with bottom-towed gear took place last year on 58 out of 64 offshore “benthic” MPAs, which aim to protect species that live on the seabed. A total of 1,604 vessels, including industrial boats, spent 132,267 fishing hours in these MPAs in the UK, it found.

Vessels with bottom-towed gear — the most destructive type of fishing, involving dragging weighted nets across sea floor habitats — spent at least 31,854 hours in MPAs in 2021. This is likely to be an underestimate, Oceana said, as it could only identify gear type for 837 boats, just over half of those detected, due to a lack of publicly available data. The vast majority were industrial vessels, it said

When vessels with bottom-towed gear fish operate in marine parks, it prevents the recovery of ecosystems already lost to decades of exploitation, and limits the seabed’s ability to store carbon and combat the effects of the climate crisis. Greenpeace has described this type of fishing in MPAs as akin to “bulldozing national parks.”

Bottom-trawling is banned in just two MPAs, to date, with another four to be protected in June.

Melissa Moore, head of UK policy at Oceana in Europe, said that Oceana’s analysis “is further proof that this damaging activity is pervasive. Yet still the UK and devolved governments have licensed this to occur throughout 2022 as well, contravening nature laws. They are destroying habitats for the future.”

Post-Brexit, the UK has granted licenses for thousands of vessels to fish in all UK waters, including in all but two offshore MPAs. “No other activities, not houses, roads or ports, are licensed first and assessed later,” Moore said. “Yet this is what happens with fishing, despite the law being clear that you must not license activities until it has been proven they do not have an adverse effect on the site.”

The offshore habitats regulations say no activities can be licensed on special areas of conservation unless an assessment confirms they will not adversely affect site “integrity.” In April, after Oceana and other groups raised legal concerns, the government committed to adopting fisheries management for all its MPAs by 2024.

The UK has had the power to ban bottom-trawling in MPAs since Brexit, via the 2020 Fisheries Act. Two years later, no bans are in place, although on June 13, new laws to outlaw the practice in four MPAs come into effect.

These include Dogger Bank, a vital North Sea breeding ground for commercial species including cod and whiting, as well as sand eels — eaten by kittiwakes, puffins, and porpoises. It is also an important site for blue carbon, the CO2 sequestered and stored in coastal and marine ecosystems.

The four MPAs represent a tenth of offshore MPAs, leaving 90 percent unprotected. Last month, the government announced that a further 13 are being examined, as part of its “post Brexit freedoms to protect rare and valuable marine habitats and species.”

But NGOs damned the government’s plans as “too slow,” “unambitious,” and unlikely to deliver its 2030 target to protect 30 percent of the ocean. They say introducing license conditions to all industrial vessels, banning them from fishing in MPAs, would allow faster and better protection.

Charles Clover, executive director of the Blue Marine Foundation, said: “The government was under an obligation to protect these areas on day one of Brexit. They are so far behind in compliance [with] their own laws, it is mystifying. And it makes them vulnerable to legal challenges.”

Will McCallum, of Greenpeace, said: “It’s taken two years for the government to introduce trawling bans on four MPAs. The whole thing is taking too long and at the end, you have a ban on a single gear type — bottom-towed gear. But, in theory, a supertrawler could go straight though it.”

A spokesperson for the Department for the Environment, Food, and Rural Affairs said: “It is untrue to say that little has changed. We have passed our landmark Fisheries Act 2020, we are consulting on the joint fisheries statement, we are stopping damaging trawling and dredging in four marine protected areas, and we have asked for evidence to support the management of 13 further MPA sites. Our £100m UK seafood fund is supporting innovation and sustainability, to ensure that our fishing sector is the most sustainable in the world.”

Defra is expected to consult soon on highly protected marine areas — defined as areas which allow for the protection and recovery of marine habitats by banning destructive fishing methods.

A Scottish government spokesperson said: “The Scottish government is committed to designating highly protected marine areas (HPMAs) covering at least 10 percent of Scotland’s inshore and offshore waters by 2026 — before the end of the current Scottish parliamentary term. This is a world-leading commitment — it meets the EU 10 percent target but in a shorter timeframe.

“HPMAs will prohibit all extractive, destructive, depositional activities and allow other activities only at non-damaging levels. We have committed to delivering fisheries management measures for existing MPAs, where these are not already in place, by March 2024 at the latest.”