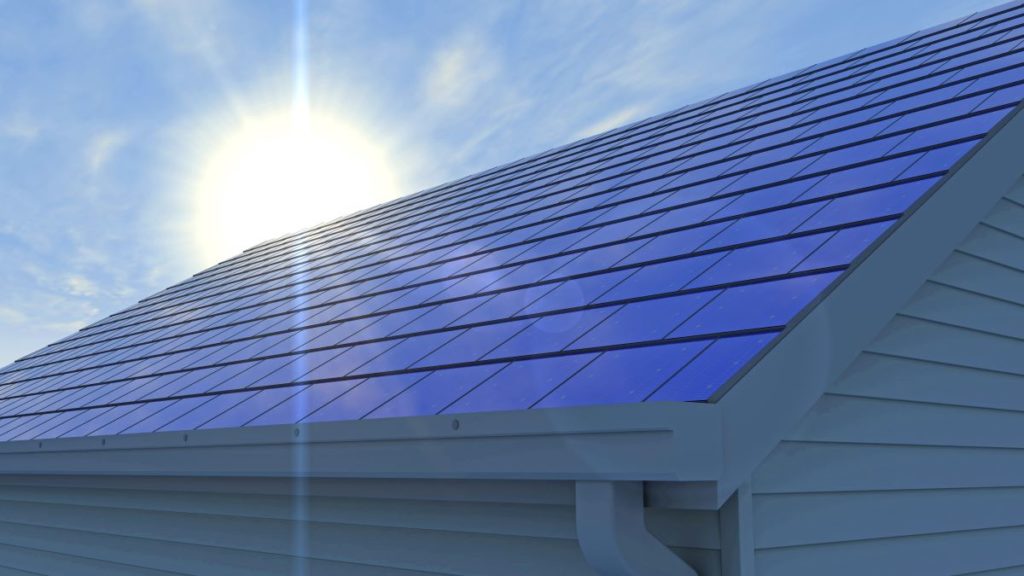 Explore the Next Generation of Solar Roofing In a world of steadily increasing energy costs, solar energy has never looked as attractive as today — it is undeniably less expensive than fossil fuel-generated power. While bulky solar panels have been the norm for solar-powered homes, more homeowners are turning to the growing selection of solar roofing options for a more attractive roof.

Although they’re effective at producing energy, solar panels have not always been very attractive. They can be heavy, bulky, and can lower your home’s curb appeal even while they’re lowering your energy costs. A sleeker alternative, solar roofing looks more like a traditional roof made of shingles, tiles, or metal panels. But just like solar panels, a solar roof harvests the sun’s energy to convert it into electricity you can use every day.

The main drawback of solar roofs right now is the cost. Compared to the average cost to replace a roof ($14,000 for a 2,000 square-foot architectural shingles roof at $7-$15 per square foot) and the cost to install solar panels ($18,000 for a 6-kilowatt system installed on the roof) combined, solar roofs can be more costly.

In this article, we’ll look at the different types of solar roofing, their pros and cons, and the average cost to have them installed in 2021. Is a solar roof right for your home?

Solar shingles are one of the hottest buzzwords in the solar industry right now. These highly durable roofing shingles mimic the look of a shingle roof but are embedded with silicon solar crystals. This can ideally give you the best of both worlds; an attractive roof and decreased energy bills.

As of right now, there are four main brands of solar shingles: Tesla, CertainTeed, Luma, and SunTegra. Of these, CertainTeed is a roofing and building material manufacturer that has jumped into the solar energy game. The others began as solar companies, then branched into roofing. All these companies offer solar shingles that match the appearance of traditional asphalt shingles, concrete tiles, or shingles that have a look all their own with a sleek, black, flat appearance. The growing selection of designs means that you can have your solar cells and an attractive look that complements your home.

The most important advantage to using solar shingles is the enhanced curb appeal for your home after they are installed. Rather than large, heavy panels installed over your current roofing, a modern solar roof will look like, well, a roof. Without the panels mounted on your roof, you also don’t have to worry about leaks or roofing deterioration; solar shingles are surprisingly durable and long-lasting.

Solar shingles do have some drawbacks compared to traditional panels. Each solar shingle tends to produce less wattage than the same area of traditional panels. To equal the output of the standard 10 to 14 panels a house may need, you will need to cover your entire roof with solar shingles. On the other hand, mixing solar and non-solar shingles can provide flexibility. For example, if you want the shingles to power your garage only, you can just install them there. There may be a subtle difference in the appearance of the shingles on the two areas.

You’ll also need to make sure that your entire roof is free of debris, dirt, and snow to help keep power flowing optimally.

Metal solar roofing is an alternative for those who want all-over solar roofing but don’t like the look or costs of shingles. A metal solar roof is essentially a standing seam roof with solar film inside the metal sections. Your roof will be nearly identical to any other standing seam metal roof — this is a roof made of metal panels with a connecting seam that sits above the panels themselves. They’ll have all the benefits of a metal roof, such as durability, but with the added bonus of solar technology as well.

Several companies make metal solar roofing, including INroof Solar and Roofit.solar. Because the solar technology is built into the roof, their roofs look identical to a regular standing seam metal roof.

Metal solar roofing comes with many of the same concerns as solar shingles. You must install them over your entire roof to get the same benefits. And you need to keep the entire roof free of snow, dirt, and debris. One advantage of the metal roofing, however, is that snow tends to slide right off, so you’re less likely to need to get out there and do it yourself. Metal solar roofing also looks like traditional standing seam roofing and is highly durable. It’s not likely to crack or dent in storms or with hailstones, so it can outlast traditional panels.

After years of high costs, solar roof panels are now the least expensive and most efficient way to get solar energy to your home. But most people don’t like the racking system, which is both visible and can damage the roof below. Interlocking solar roof panels solve these issues. Essentially, these are solar panels that install right on your roof deck — no racking or roofing material beneath them. The edges of the panels interlock and are sealed to create one, smooth, complete surface. While these are more visible than solar shingles or metal panels, they’re less obvious than traditional solar panels. They can also potentially provide more wattage for the coverage, allowing you to go off-grid more easily.

As of right now, two companies are making this type of solar roofing: GAF and SunTegra. GAF is one of the oldest roofing manufacturers, which means that they understand the limitations of what can be placed on a roof deck. SunTegra, on the other hand, is better versed in solar technology and maximizing the output from each panel. Both can give you a sleek-looking roof without the metal racking system of traditional solar panels.

The biggest advantage of this system is its simplicity and efficiency. A traditional solar installation would start with a new roof, if you needed one, with the solar panels installed on top. But with this system, there’s no need to install a new roof because the panels are the roofing — there is no roof below the panels. As a result, the panels are less prominent than traditional solar panels, and concerns about heavy panels damaging the roof are virtually eliminated. This option also has the potential to produce higher watts than other types of solar roofing.

Depending on your aesthetics, one drawback with this system is that it will look like you covered your roof with solar panels. The panels are smooth and installed together over the entirety, but it does not look like any other roofing material currently in use today. Also, they can be more expensive than some other solar installations, particularly if you don’t need a new roof.

This option of solar roofing tends to be priced by the watt, much like traditional solar systems. But while a solar panel system installed on an existing roof may cost just under $3 a watt, these systems cost nearly $5 a watt, including the materials that may not be producing solar energy. This means that for a 2,000 square-foot home, you would pay between $30,000 and $35,000 for a 6,000- to 7,000-watt system.

Solar panels and solar energy are getting a lot of attention with the rise of energy costs and climate change. Solar energy use in a home can even potentially increase a home’s value due to the savings it can bring. But panels aren’t the right fit for every home or installation. If you like the idea of solar energy, but not the idea of bulky panels on your roof, take a look at the different types of solar roofing available today to see if one of these might suit your needs better.

Cristina Miguelez is a remodeling specialist at Fixr.com, a website that connects consumers with service professionals in their area and estimates the cost for remodeling projects. She writes about home improvement tips and tricks to help homeowners make better home remodeling decisions.