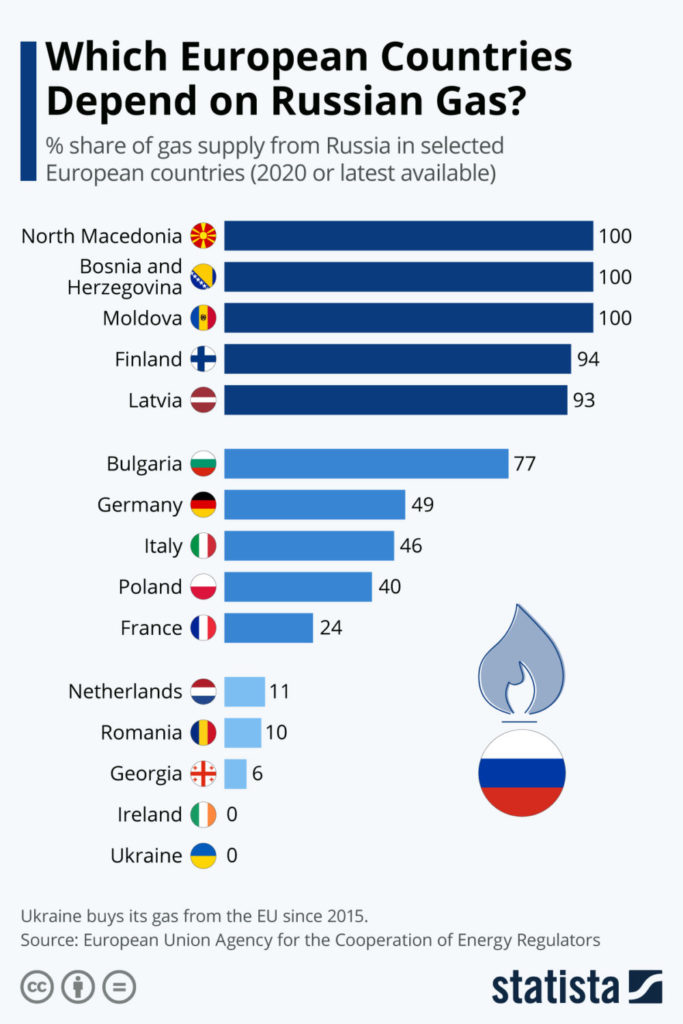 The Russian attack on Ukraine has led to a spike in energy prices, with oil briefly surpassing $100 a barrel, the highest level since 2014, and Dutch and British gas prices rising 40 to 60 percent Thursday. Russia is the world’s second-largest exporter of oil and largest exporter of natural gas. As the war intensifies and sanctions loom, analysts fear disruptions to the supply of fossil fuels.

The European Union (EU), which is heavily dependent on the Kremlin for oil and gas, is aiming to break free of Russian imports, giving it greater latitude to impose sanctions on Moscow without roiling energy markets at home, The Washington Post reports. Russia supplies 40 percent of the EU’s natural gas.

In a bid to achieve energy independence, the EU is looking to speed the shift to renewable power. Its new energy strategy, to be unveiled March 2, calls for cutting fossil fuel consumption by 40 percent by 2030, an anonymous official involved with the effort told The Post. The plan would fast-track renewable energy projects and also make it easier for member states to provide aid to consumers facing higher energy bills.

It will take years for Europe to free itself from Russian imports, but that work has already begun in light of the conflict in Ukraine. Germany has halted certification of the Nordstream 2 pipeline, which would carry gas directly from Russia to Germany under the Baltic Sea. President Biden subsequently sanctioned the company behind the project.

“It takes a lot of work to back out a fuel like [natural] gas, and Europe has been well on its way to doing this over the last five years. It just needs to do more now,” Sarah Ladislaw, a managing director at the Rocky Mountain Institute, told The Post. “Europe doesn’t have to completely eliminate its dependence on Russian gas. It just has to neutralize its potency as a point of leverage.”

Building Back Better: Why Europe Must Lead a Global Green Recovery