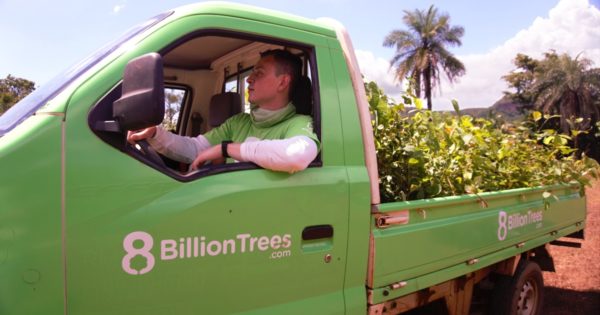 Earth911’s Mitch Ratcliffe talks with Jon Chambers, cofounder of 8BillionTrees.com, which offers a variety of ways to “shop and erase your carbon footprint.” They’ve planted more than 6.4 million trees to date and make it simple to calculate how much CO2 your daily habits produce. 8 Billion Trees provides tree planting to offset your streaming video habit, a birthday party, or your pet’s carbon footprint. Chambers and his cofounder Michael Powell set out to create “the most environmentally aware social enterprise on the planet.”

Humanity has eliminated 1.4 billion hectares (5.4 million square miles) of the world’s forests in the last 300 years. Tree planting was the most effective choice for offsetting CO2 that Jon’s team identified when they launched in 2018. When you purchase a product on the 8BillionTrees shop, they will conserve 100 existing trees and plant 10 trees. An annual subscription to support planting 516 trees a year is also available for $43 a month.

Taking action to offset your carbon footprint is getting easier. But offsets are only one step. Each of us must also cut our environmental footprint by reducing meat consumption, food waste, and switching to electric vehicles powered by renewable energy. 8BillionTrees is also expanding its efforts to produce biochar, or “Black Earth” as it is known in the Amazon. Biochar is an amalgam of dead biomass and other composted organic materials that are gathered and heated in the absence of oxygen through a process known as pyrolysis to produce an organic soil additive. The resulting soil additive captures and stores carbon effectively for thousands of years. It also supercharges reforestation efforts by decreasing seedling mortality and accelerating growth rates.

This podcast originally aired on September 13, 2021.