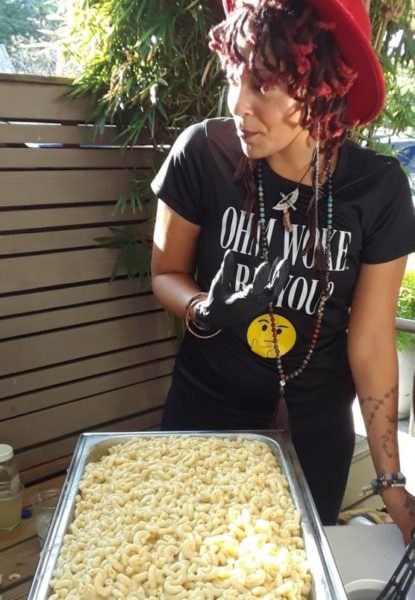 If you are shifting toward plant-based eating, you’ll be delighted to know you don’t need to forego a familiar, superbly satisfying, kid-pleasing favorite: macaroni and cheese.

Indeed, dairy is referenced right in its name. Even so, this much-adored dish is definitely not left behind in the trendy plant-based realm. It’s firmly in place on meat-free and dairy-free menus.

Recipes for enticing vegan versions of mac & cheese are rolling out in abundance. In fact, I snagged several after volunteering at the 2019 Animal Hero Kids MacnCheeze Challenge to Save the Earth event in Fort Lauderdale.

Direct from the Sunshine State, here are some ideas for whipping up your new favorite dish.

Chef Sheena SheWins of Ohm Woke Meals says she didn’t calculate exact measurements when creating her entry for the event. Instead, she followed her instincts, which netted a pair of awards.

Boil noodles to al dente, then strain. Blend vegan cream cheese, vegan butter, salt, and non-dairy milk, and add that sauce to the noodles. Then add truffle oil and salt and pepper to taste. If you’d like, bake it at 350 degrees for about 20 minutes.

“The trick to a very great tasting mac & cheese is to always boil your pasta noodles in salt water,” says Chef Sheena. “We do not use oil.”

The entry from Patricia and Rahein Jones was among the winners, and is also popular at their restaurant, The New Vegan, in Delray Beach.

Boil pasta and run under cold water to help prevent it from breaking apart. Simmer a sauce using the Daiya shreds, water (about 1/3 cup water for every 1/2 cup of cheese), salt, pepper, and garlic powder. Mix sauce with cooked pasta.

Top servings of the dish with chopped bits of grilled veggie burger or other preferred plant-based protein. Vegan fried chicken is a popular topping at the restaurant. Finally, drizzle Soy-Free Vegenaise, and garnish with fresh cilantro and sautéed scallion greens.

Owner Valerie Chelley and Erin Fontes of Vinos Wine Bars were going for a flavor that reminded them of childhood. They felt they succeeded when youngsters at the event returned for seconds and thirds.

Fontes suggests this recipe is ideal for mixing in peas, broccoli, or other veggies.

Whisk together 2 tablespoons of King Arthur Gluten Free All-Purpose Flour, 2 tablespoons of vegan butter, and 1 cup of macadamia milk over medium-high heat. Blend fully, making sure there are no lumps. Whisk in remaining ingredients, adding one by one until each is blended:

Boil potatoes and carrots until soft. Blend potatoes and carrots together along with the rest of the ingredients on high in blender until the cheese is extremely smooth. Do this in small batches to make sure the mixture doesn’t overheat the blender. Store in refrigerator for up to four days.

Before you start whipping up your own versions of vegan mac & cheese, we wanted to share one more recipe from across the nation. Chef Kyle Knies of From the Garden in the San Francisco area shared this “super decadent, over the top, very extravagant” recipe, which he created when he worked at Miyoko’s.

1 lb. pasta such as penne, fusilli, or other shaped pasta

If using fresh bread, place slices in a single layer on a baking sheet and bake for about 20 minutes until all pieces are crispy and have a light golden brown color. If the underside still seems soft, flip and toast an additional 5 to 10 minutes. No need to do this if bread is hard. Cool fully until crisp.

Boil pasta in lightly salted water. Cook a minute or two less than the package instructions state so it is “al dente.” It cooks more when it is baked. Reserve several cups of pasta water and set aside. If you drain pasta before the sauce is finished, return it to the pot and coat with vegan butter to prevent sticking.

Rinse leeks well and cut off dark green tops, keeping the light green middle sections and white bottoms. Remove roots and slice leeks into rounds. Submerge the sliced leeks into a bowl of water and agitate to clean and dislodge dirt or sand. Drain water and repeat until the leeks are perfectly clean.

Sort through mushrooms and discard any that seem soft or have an unappetizing odor. Clean mushrooms with a damp towel. Chop chanterelles into meaty pieces and slice cultivated mushrooms.

Peel garlic and chop in a food processor.

In a large pan over medium-high heat, melt vegan butter. Add leeks and a dash of salt. Cook, stirring frequently, for several minutes until leeks start to soften and turn golden brown at the edges. Add mushrooms and stir to combine with leeks and coat with vegan butter. After a few minutes, add garlic. Cook until mushrooms are cooked through.

There may be liquid filling the bottom of the pan from the mushrooms. This is rich mushroom liquor and there is no need to cook it off. Taste one of each type of mushroom to ensure it is fully cooked and season with salt and pepper as needed. Remove from heat.

In a saucepan over medium heat, melt vegan butter. Once melted, crumble in the wheels of High Sierra Rustic Alpine and Aged English Sharp Farmhouse. Using a whisk, break up cheese into small pieces and allow it to soften. It will not melt like dairy cheese but will start to look like cookie dough once the pieces break down.

Stirring constantly with whisk, add warm pasta water one cup at a time and keep whisking until it is combined. The sauce will get very thick at first as you add liquid, and may get very lumpy. Keep stirring and adding water over the course of a few minutes until it is the texture of a thick cream sauce, You do not want it too thin, because the liquid in the mushroom mixture will also be added.

Once fully smooth and creamy, add vegan mozzarella (break up into chunks if using Fresh VeganMozz) and continue whisking until melted. Turn off heat. Continuing to cook it further may cause oil separation. If this happens, just whisk it quickly to mix the oil back in right before adding to pasta.

Once cheese sauce is fully cooked, add the mushroom mixture and stir to combine. Taste finished sauce by dipping a cooked noodle into it, making sure you get a piece of mushroom. Add extra salt, if needed, and freshly ground black pepper to taste. Stir to combine. If it is very thick, add a little more water.

Place dry/toasted bread into a food processor. Pulse several times until coarsely chopped, then run for a minute until it is fine breadcrumbs.

Slice butter into chunks if it’s cold, or drizzle it if it’s melted. Break Winter Truffle cheese into small pieces and add it to the food processor. Pulse several times to fully combine with breadcrumbs.

Add cooked pasta to sauce with mushrooms. Stir well to coat all noodles with sauce. Pour in deep baking or casserole dish and press to flatten the top. It should be saucy. Add breadcrumbs over top, coating the entire dish.

Cover dish and bake for 40 to 45 minutes until cheese sauce is bubbling.

Turn up heat to 400 degrees and uncover the dish and bake another 8 to 12 minutes or until breadcrumbs are golden brown.

Serve immediately. With a salad.