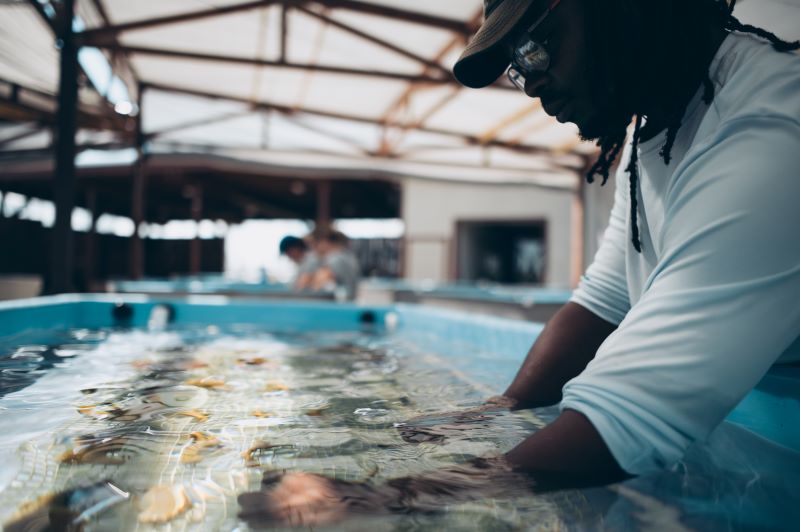 Coral Vita and the Vital Importance of Restoring Coral Reefs

Coral reefs are one of the most important yet delicate ecosystems on the planet. Despite covering less than 1% of the ocean, they are home to 25% of marine life and support the livelihoods of as many as 1 billion people. Hundreds of millions of people depend on coral reefs as a source of food. The beautiful reefs power coastal economies around the world through tourism, fishing, and recreation. They are a source of medicinal compounds for drugs that treat cancer, viruses, and more. And they shelter coastlines from storms and erosion, absorbing approximately 97% of the energy from waves during events like hurricanes and storm surges.

All told, this one ecosystem generates an estimated $2.7 trillion annually in goods and services each year. Yet human activities are destroying the world’s coral reefs. Many are already dead. Is it possible to restore this valuable ecosystem?

Challenges to Coral Populations: Climate Change and Beyond

A variety of challenges are combining to threaten global coral reef health including overfishing, pollution, habitat destruction, and climate change. At this point, 80% of the reefs in the Caribbean are already dead compared to measurements in the 1970s. On a global scale, half of the world’s reefs are dead, and we are currently on track to lose over 90% within the next 30 years. That 90% figure is calculated based on humans limiting global warming to 1.5 degrees Celsius. However, if we exceed 1.5 degrees, we are at risk of losing 99% of the world’s reefs.

Local factors are also at play: toxic waste dumped into the sea; overfishing key species, which allows macro algae to swamp coral habitat; and poor coastal development practices, dredging, and pollution can all affect the water composition and conditions corals need to survive and thrive.

But climate change is the biggest threat to the future of coral reefs. Just like humans, corals have a very narrow window of survival parameters – especially water temperature or acidity – within which they can live. When the oceans get warmer and CO2 contributes to greater waster acidity, corals experience a process known as coral bleaching. Basically, the coral starves to death. When stressed by rising temperatures, the corals expel the colorful algae that live inside and feed them. Without the symbiotic algae, the corals’ white skeletons are exposed and they appear bleached. And if the temperatures don’t return to normal quickly enough, the corals die.

A global mass bleaching event should occur only rarely, maybe once every 80 to 100 years. But we’ve seen five mass bleaching events since 1998. Scientists project that we might experience one every other year by the mid-21st century if we don’t solve climate change. The loss of the reefs is more than just an ecological tragedy; it’s also a social and economic catastrophe for the over 100 countries and territories that depend on coral reefs for food, jobs, shelter, cultural heritage, and even medicine.

While the best thing to do for coral reefs is to cease the human activities that are killing them, solutions like coral restoration offer hope for the future.

We can bring reefs back to life. Akin to doing reforestation, coral restoration relies on growing and planting new corals into degraded reefs, revitalizing their health and productivity. Amazing coral restoration practitioners and organizations all around the world have been at work for decades. But one of the key challenges has been the inability to do this work on a large scale. Most of these projects are funded through grants and donations that limit the scope of work. With a problem as widespread and persistent as global reef degradation, the grant-funded model simply can’t work efficiently in the long term.

Additionally, most projects around the world use ocean-based underwater coral gardens, which don’t scale well to meet the needs of this crisis. Nurseries typically focus only on fast-growing species, missing out on critical ecological diversity, and can do little to enhance coral resilience to climate change.

While these practices work on a smaller scale for localized projects, global reef restoration needs methods and funding models that meet the scope of the challenge. So we created Coral Vita to address this need.

Coral Vita’s mission is to restore dying and damaged reefs. Our work helps preserve the ocean’s biodiversity and protect those that depend on the reefs.

One of the main things we do differently at Coral Vita is we operate as a mission-driven business utilizing a land-based coral farming model. This model integrates cutting-edge methods pioneered by some of our original advisors, like Dr. David Vaughan and the late Dr. Ruth Gates. With these methods, we grow coral in months instead of decades, up to 50 times faster than they grow in nature. And we can strengthen coral resiliency against the things that are killing them, like warming and acidifying oceans.

From a single land-based farm site, we have the potential to supply an entire island or region’s reefs with diverse, resilient, and affordable coral. This is far more efficient than underwater nurseries at every reef — each location with its requisite trained staff and infrastructure.

As a social enterprise, we look at the financial values and benefits that reefs provide — their ecosystem services — and sell “restoration as a service.” Any organization that depends on the benefits of reefs — including tourism, coastal protection, and fishing — has reason to hire Coral Vita to restore them.

To effect real change, our land-based farms also function as education centers for local students and fishermen. This helps build local capacity to grow our efforts — and creates good jobs in the restoration economy. The farms also serve as revenue-generating tourism attractions, helping to educate the public about coral restoration in an experiential way.

How You Can Help

When traveling to areas with coral reefs, stay at hotels and support local businesses that are proactive about ocean preservation. When buying things, consider spending your dollars on products or companies that aren’t contributing to things killing coral reefs like rising greenhouse gas emissions, overfishing, pollution, or deforestation. And if you live in a democracy, vote for politicians — from education boards to heads of state — who demonstrate proactive leadership to preserve the critically important ecosystems that sustain us all.

When it comes to supporting Coral Vita, we have a program for people, organizations, and companies to adopt a coral, giving everyone the opportunity to help revive our oceans. We believe our innovative model and methods offer the global-scale impact needed to keep coral reefs alive for future generations.

To learn more about the importance of coral restoration, or to get involved by visiting our farm or adopting a coral, please visit coralvita.co. Sam Teicher co-founded Coral Vita, a social enterprise that grows resilient corals to restore dying reefs. He previously worked on climate resiliency initiatives at the Obama White House and for the Global Island Partnership. Sam is an inaugural Earthshot Prize Winner and a Forbes 30 Under 30 Social Entrepreneur. He also co-authored Sustainable Development Goal 14: Life Below Water, and has been in love with the ocean since becoming a scuba diver as a child.