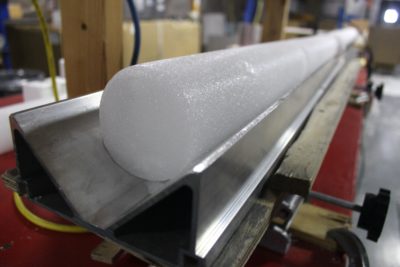 Climate Clues from the Past Prompt a New Look at History

Joseph Manning, a Yale University professor of ancient history, likes to recall the moment when he was shown an advance copy of a scholarly paper that pinpointed the timing of major volcanic eruptions over the last 2,500 years. As he read the paper, “I literally fell off my chair,” he said recently⁠.

Relying on new geochemical techniques for analyzing ice core sediment to determine the dates of ancient volcanic activity down to the year or even season, the paper, published in Nature in 2015, showed that major eruptions worldwide caused precipitous, up-to-a-decade-long⁠ drops in global temperatures. Later research pegged those drops at as much as 13 degrees F.⁠

What stunned Manning, an Egyptologist, was that the paper recalibrated earlier chronologies by seven to eight years, so that dates of the eruptions neatly coincided with the timing of well-documented political, social, and military upheavals over three centuries of ancient Egyptian history. The paper also correlated volcanic eruptions with major 6th century A.D. pandemics, famines, and socioeconomic turmoil in Europe, Asia, and Central America. The inescapable conclusion, the paper argued, was that volcanic soot — which cools the earth by shielding its surface from sunlight, adversely affecting growing seasons and causing crop failures — helped drive those crises.

Since then, other scholarly papers relying on paleoclimatic data— most of it drawing on state-of-the-art technologies originally designed to understand climate change — have found innumerable instances when shifts in climate helped trigger social and political tumult and, often, collapses. The latest is a paper⁠ published last month⁠ in Communications Earth and Environment that posited “a systematic association between volcanic eruptions and dynastic collapse across two millennia of Chinese history.”

Like DNA evidence that overturns a guilty verdict, climate data is information that historians have to take in.

The study found that 62 of 68 dynastic collapses⁠ occurred soon after Northern Hemisphere volcanic eruptions, an outcome that had only a one-in-2,000 chance of happening if the eruptions and collapses were unrelated. Chinese have traditionally cited the withdrawal of the “mandate of heaven” to explain the cold weather, droughts, floods, and agricultural failures that seemed to accompany the fall of dynasties. The paper contends that those phenomena have a climatic explanation.

All these papers are propelled by a nearly-decade-long revolution in climate science technology. A blizzard of quantitative data from “climate proxies” — ice cores, tree rings, cave stalagmites and stalactites, and lake, bog, and seabed sediments — has upended the way some historians do their work.

Joe McConnell, who runs a pathbreaking ice core analytical laboratory at the Desert Research Institute in Reno, Nevada, believes that climate data offers historians what DNA evidence provides the judicial system: an incontrovertible, objective source of crucially important information. Like DNA evidence that overturns a guilty verdict, McConnell said, the climate data is information that historians “have to take in.”

To tap that data, some historians are crossing extensive barriers within their discipline to work with biologists, geologists, geographers, paleoclimatologists, climate modelers, anthropologists, and others. These mold-breaking historians are learning geochemistry and climatology; the scientists they work with are reading history.

“Our ability to integrate climate data with humanistic archives about past climate change is one of the most important and exciting developments in History,” Manning wrote in the introduction to a book published this year that he co-edited called Climate Change and Ancient Societies in Europe and the Near East. “The possibility of rewriting almost the entirety of human history lies before us. History will never again be based on written texts alone.”

Manning now attends more science conferences than history conferences. A paper⁠ he co-authored last year with 19 other natural scientists, historians, and archeologists argued that one of the biggest volcanic eruptions of the last 2,500 years, at Alaska’s Okmok volcano in 43 B.C., resulted in a decade of forbiddingly cold temperatures across the Northern Hemisphere, helped trigger the end of Egypt’s Ptolemaic Kingdom, and hastened the transition from the Roman Republic to the Roman Empire, as Rome gave up some trappings of constitutional government to become an absolute monarchy. As the paper explained, “The wet and very cold conditions from this massive eruption on the opposite side of Earth probably resulted in crop failures, famine, and disease, exacerbating social unrest and contributing to political realignments across the Mediterranean region at this critical juncture of Western civilization.”

To be sure, most historians working with climatological data don’t believe that climate is the sole explanation for most historical shifts. “There are always multiple causes,” said John Haldon, a professor of Byzantine history and director of the Climate Change and History Research Initiative at Princeton University. “Climate doesn’t change the political and social history story as such. What it will change is our understanding of the causes behind those events and how they interconnect.”

The emerging data suggests that many historians have overlooked climate’s impact on human events.

The movement among historians to take climate into account is still a subgroup within a subgroup, a branch of environmental history usually led by academics who win tenure before taking on “Big History” in volumes that can span millennia or epochs. As a graduate student in the late 1970s, John L. Brooke, now an Ohio State University historian, says he was discouraged from addressing climate and didn’t take up the subject until he had written two books on American history; he eventually wrote Climate Change and the Course of Global History: A Rough Journey, the field’s magnum opus to date, published in 2014. (Brooke is now writing a revised edition, but the onslaught of new paleoclimatic data is so overwhelming that in the last two years he has managed to redo only two of the book’s 13 chapters.)

The emerging data suggests that many historians have overemphasized the roles of leading political actors — monarchs, politicians, military leaders — and overlooked climate’s impact on human events. Wars, revolutions, and assassinations may end regimes; changes in climate have played starring, if not sole, roles in ending whole societies.

As Kyle Harper, a University of Oklahoma classics professor who drew on climate data to write a 2017 book called The Fate of Rome, explained in the book’s first chapter, “Most histories of Rome’s fall have been built on the giant, tacit assumption that the environment was a stable, inert backdrop to the story. As a byproduct of our own urgent need to understand the history of earth systems, and thanks to dizzying advances in our ability to retrieve data about the paleoclimate … we know that this assumption is wrong … immodestly, unnervingly wrong. The earth has been and is a heaving platform for human affairs, as unstable as a ship’s deck in a violent squall. Its physical and biological systems are a ceaselessly changing setting, and they have given us … ‘a rough journey’ for as long as we have been human.”

Centers focused on the convergence of climate and history have sprung up at a few U.S. universities — Yale, Princeton, and Georgetown University among them — and others are scattered across Europe. The approach faces resistance from tradition-bound historians who have little interest in natural science or interdisciplinary scholarship and discount co-authored papers in tenure decisions. “Most of the profession totally doesn’t care” about climate research, Brooke said in an interview. “We are fighting an uphill battle with the profession.”

Unlocking secrets from the ice in a rapidly warming region. Read more.

Nevertheless, climate-minded historians are writing papers with as many as 40 co-authors, often with natural scientists who are accustomed to co-authorship. Group approaches are necessary because the studies require interpolating from both historical documents and measurements of charcoal, pollen, lead⁠, and numerous other deposited substances that provide clues to temperature, precipitation, fires, droughts, agricultural activity, industrial activity, and so on. Computer-assisted atmospheric transport and earth system modelers provide a kind of glue, showing how particles in, say, ice cores got there from thousands of miles away, linking the substances to human activity.

Less than a decade ago, scientific calculations of the dates of volcanic eruptions used only 16 measurements per ice core to cover 2,000 years of history and included as much as two-century margins of error, too imprecise to be of use to historians. Instruments invented at the Desert Research Center in Reno now take 21,000 measurements per ice core and can detect at least 30 elements down to parts per quadrillion⁠. This data improves on the old estimates by two orders of magnitude, enabling historians to make exact correlations with documented historical events.

Each climate proxy offers different perspectives⁠. Ice cores from the Greenland and Antarctic ice sheets and glaciers usually offer a global view, measuring particles that drifted thousands of miles from volcanic eruptions, wildfires, or other occurrences. Thus, since lead was a byproduct of mining and smelting that produced silver coins during the Roman empire, lead sediment in faraway ice cores can offer insight into Roman economic activity.

By contrast, variations in tree rings provide a local view: wider rings, indicators of high tree growth, may signal temperatures and precipitation that support other vegetation in the tree’s region. But trees live for only a limited time, and trees with rings are much less common in tropical areas. There, scientists may turn to mineral deposits in stalagmites and stalactites that also reflect moisture variations. Cores of lake bed, peat bog, and seabed sediment may fill in other missing evidence, providing clues about a large range of phenomena, from precipitation to wildfires.

Researchers typically face a patchwork⁠ of data from many sources that they painstakingly try to fit together. Most of the time, the numbers don’t agree, often because they’re incomplete or reflect climate or proxy “noise” rather than a meaningful pattern. On the rare occasions when all the data coincides with documented historical dates, the result is a significant scholarly paper.

Not surprisingly, some historians are skeptical of findings based chiefly on climate data. At last year’s annual meeting of the American Historical Association, its then-president, John McNeill, himself a celebrated Georgetown University environmental historian, devoted his presidential address⁠ to the topic, and sounded ambivalent. The change is “potentially revolutionary, and like many revolutions, fraught with peril, as well as filled with promise,” he said.

Prominent among his worries is that science-minded history will exhibit “climate determinism,” offering climate explanations as the sole reason for complex historical changes, while leaving out human agency. Thus, he said, work showing a correlation between volcanic eruptions and Chinese dynasty collapses is “an example of the recent tendency to take paleoclimatological information and concoct monocausal explanations … No one did so before the relevant climate data became available. No one should do so now. … Preference for one variety of evidence over all others, although tempting, is a recipe for trouble.”

But while some earlier historians posited climate as the sole explanation for given historical changes, few historians make that claim now: more typically, they argue for the necessity of taking climate into account, not for excluding all other factors. Even the work on Chinese dynasty collapses that McNeill seemed to cite (although he spoke nearly two years before the paper was published) posited volcanic eruptions as the “proximate” or “ultimate” cause, not the sole cause, of many dynastic collapses, and explicitly rejected “monocausal interpretations.”

The life story of the oldest tree on Earth. Read more.

No matter how the climate determinism argument plays out, the new approach to history offers confirmation of climate’s outsized role in human affairs. The fact that a volcanic eruption in Alaska 2,000 years ago could contribute to disruption of a society 6,500 miles away in Egypt is, if nothing else, a reminder that climate change and human destiny are globally intertwined. It teaches that the intricate planetary climate mechanism that ceaselessly operates around us could be ruthless, even before humans revved it up with two centuries of massive carbon pollution. Climate is powerful, the data shows. Pay heed.