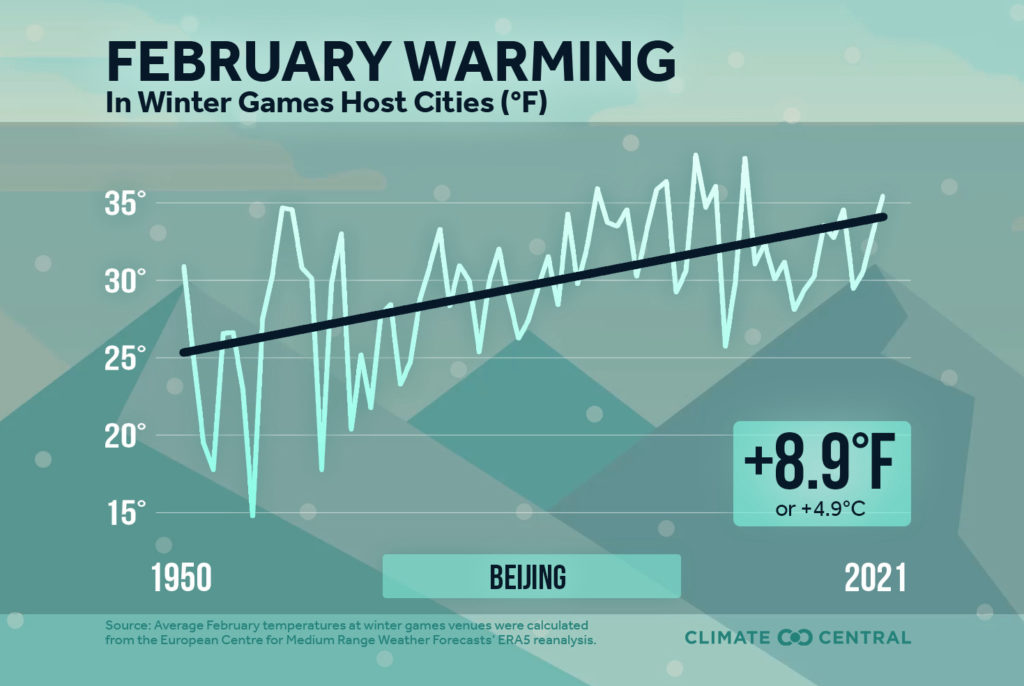 Cities That Have Hosted the Winter Olympics Have Experienced Severe Warming, Analysis Finds

Cities that have hosted the Winter Olympics are seeing rapidly warming temperatures and diminishing snowfall. In Beijing, host of this year’s games, February temperatures have risen by almost 9 degrees F since 1950, according to a new analysis from Climate Central.

February temperatures have risen by 4.8 degrees F on average across all 19 cities that have hosted the Winter Games since 1950, outpacing the global average of 1.6 degrees F of warming since the mid-twentieth century. Oslo and Lillehammer, Norway have been subject to the most severe warming, with February temperatures rising 9.8 and 9.2 degrees F, respectively. In Beijing, which has seen the third-highest level of warming, winter temperatures have reached unprecedented highs. Last February, the mercury hit 78 degrees F in the Chinese capital, some 40 degrees F higher than normal.

In addition to delivering warmer temperatures, climate change is also producing less snow and more rain in many places. A lack of snow can impact skiing, as can warm weather or rainfall, which turn snowpack to slush. And unusually high temperatures can also put additional stress on athletes. Such conditions make outdoor sports more dangerous, athletes say. A recent study found that, if emissions continue unchecked, by the end of this century only one of the cities that previously hosted the Winter Games — Sapporo, Japan — can reliably expect the conditions needed to accommodate outdoor sports.

“The world of winter sport is changing as climate change accelerates, and the international athletes and coaches we surveyed are witnessing the impacts at competition and training locations, including the Olympics,” said Daniel Scott, professor of geography and environmental management at the University of Waterloo and lead author of the study. “No sport can escape the impacts of a changing climate.”

Despite Pledges to Cut Emissions, China Goes on a Coal Spree