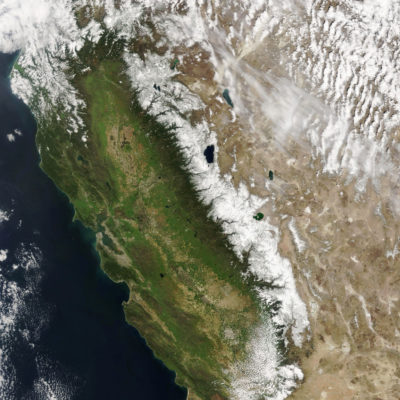 Can Cloud Seeding Help Quench the Thirst of the U.S. West?

Not since Charlemagne was crowned Holy Roman Emperor in 800 A.D. has the American West been so dry. A recent study in Nature Climate Change found the period 2000 to 2021 was the driest 22 years in more than a millennium, attributing a fifth of that anomaly to human-caused climate change. The megadrought has meant more fires, reduced agricultural productivity, and reduced hydropower generation. Last summer, the United States’ two largest reservoirs — Lake Mead and Lake Powell — reached their lowest levels ever, triggering unprecedented cuts in water allocations to Arizona, Nevada, and Mexico.

Desperate for water, several Western states have expanded decades-old programs to increase precipitation through cloud seeding, a method of weather modification that entails releasing silver iodide particles or other aerosols into clouds to spur rain or snowfall. Within the past two years, Idaho, Utah, Colorado, Wyoming, and California have expanded cloud seeding operations, with seeding a key plank in the Colorado River Basin Drought Contingency Plan.

Cloud seeding operations have also expanded in water-stressed regions outside the U.S. The United Arab Emirates, which currently gets more than 40 percent of its water through desalination plants, has built a weather enhancement factory that can churn out 250 cloud seeding flares a week. China has long had a far more substantial weather modification infrastructure, with millions of dollars spent each year seeding clouds in the semi-arid north and west, often with anti-aircraft guns launching silver iodide flares into the sky. In 2020, the central government announced that the weather modification program would expand to include more than half of the country, with a grand vision of a “sky river” carrying water from the humid south to the drier north.

“We still don’t have a very great understanding of how much water we can produce,” an expert says.

Some of the renewed attention on cloud seeding is driven by fresh evidence that it actually works — at least when seeding for snow. In 2020, a group led by researchers at the University of Colorado and the National Center for Atmospheric Research reported the results of a study conducted at a cloud seeding operation in Idaho. Called SNOWIE, the study used sophisticated radar and meteorological methods to demonstrate unambiguously that cloud seeding can increase snowfall.

“Cloud seeding works,” says Katja Friedrich, an atmospheric scientist at the University of Colorado and lead author of the SNOWIE study. “We know that. We know that from experiments in the lab. We also have enough evidence that it works in nature. Really the question is: We still don’t have a very great understanding of how much water we can produce.”

Governments and users aren’t waiting for more certainty to pursue projects. In the U.S. West, the need for water is so acute and cloud seeding so cheap that even a very slight increase in precipitation is worth it, says Friedrich. “Cloud seeding is something people consider in areas where they’re desperate for water,” she says.

But cloud seeding should not be thought of as a response to drought, experts agree. For one, in a drought there are likely to be fewer seed-able storms. And when there are storms, even the estimates from cloud seeding companies themselves show the practice increases precipitation by only around 10 percent in a given area. That might be worth the effort when every acre-foot counts, but it’s not going to end a drought across an entire region.

Cloud seeding, if it’s done at all, is most effective when practiced continually, seeding in wet years and dry years alike to try to keep reservoirs full and soil moist. Along with conserving and using water more efficiently, “it’s just another tool in the toolbox for water supply,” says Mike Eytel, a senior water resource specialist for the Colorado River District. “It’s not the panacea that some people think it is.”

Cloud seeding got its start because of a problem with planes. When pilots began to fly through clouds, ice sometimes accreted on the wings, impacting their ability to fly. During World War II, this was a major issue for American planes flying from India over the Himalayas to supply Chinese forces, a treacherous trip known as “The Hump.” Many planes turned back after icing up. After the war, General Electric began studying how supercooled water in clouds — water that is below freezing temperature but still liquid — became ice. “They were creating the supercooled water clouds in this freezer, and they threw some dry ice in there,” says Frank McDonough, a meteorologist at the Desert Research Institute. The dry ice caused the supercooled water to form ice crystals — snow.

Soon, General Electric scientists were running experiments in real clouds, first with dry ice, then with silver iodide, crystals of which resemble ice. When silver iodide particles are released into a cloud, droplets of supercooled water form crystals around them, which fall to the ground as snow. Clouds can be seeded from rockets, planes, or from the ground by burning silver iodide in acetone, so the particles rise in smoke. Warm weather seeding for rain works somewhat differently. Instead of silver iodide, “giant aerosols” such as salt are released into clouds by planes, causing larger droplets to form among the trillions of supercooled droplets too small to fall, which can spark a chain reaction leading to rain.

“In terms of research, this is a really exciting time for cloud seeding,” says a scientist.

The finding that weather modification was possible generated a lot of interest, but attempts to demonstrate that seeding reliably caused more precipitation were inconclusive. Stymied by a limited understanding of cloud physics and the difficultly of running well-controlled experiments in nature, researchers were unable to distinguish the effects of cloud seeding from natural variability. The ambiguous evidence, combined with some overzealous promises, gave weather modification a reputation for charlatanism, and research dwindled.

As the climate warms, could the U.S. face another dust bowl? Read more.

In 2003, recognizing that a number of states had continued cloud seeding programs despite the limitations of prior research, the National Research Council revisited the literature on weather modification. “The Committee concludes that there still is no convincing scientific proof of the efficacy of intentional weather modification efforts,” the report found. “In some instances there are strong indications of induced changes, but this evidence has not been subjected to tests of significance and reproducibility.”

The 2020 study from SNOWIE, which demonstrated that seeding for snow can work in the right meteorological contexts, changes that picture. “In terms of research, this is a really exciting time for cloud seeding,” says Sarah Tessendorf, a researcher at the National Center for Atmospheric Research and another author of the SNOWIE study, though she is careful to qualify the results.

For one, the SNOWIE findings don’t apply to warm weather seeding for rain, which exploits a different mechanism within different types of clouds. And what worked in Idaho doesn’t necessarily apply elsewhere, Friedrich says; even within the SNOWIE study itself, increased snowfall was not observed after every seeding run. Further, the sophisticated radar methods used in the study are not available to analyze every operation, and many questions remain about when, where, and with what methods cloud seeding is most effective, with robust data in short supply.

Cloud seeding operators submit annual reports to states estimating additional precipitation caused by their efforts, often claiming hundreds of thousands of additional acre-feet, but “it’s kind of crude,” says Eric Hjermstad, who runs Western Weather Consultants, a cloud seeding company that manages several seeding operations in Colorado. For instance, company reports make comparisons between seeded areas and unseeded areas at different altitudes or with different levels of humidity, or they make assumptions about the amount of snow that actually ends up in river systems. “I don’t think they are really off in what they are saying,” says Friedrich. “But sometimes we need to question these [reports].”

To address this, Friedrich, Tessendorf, and others aim to use the SNOWIE data to develop more accurate cloud seeding models, which could improve predictions of how much additional precipitation is caused by given operations and determine where and when cloud seeding is most effective — not that cloud seeding operations are waiting around for better models.

Cloud seeding projects are often funded through cost-sharing agreements between state and local governments, and private parties, such as ranchers or ski resorts, willing to accept some risk that their money is for naught, says McDonough. And many are convinced that cloud seeding is having an effect, despite considerable uncertainty in the annual reports. “They know their local water supplies and snowpack well enough that I think they feel like they’re seeing the results,” he says. “These people don’t have that much money. I think that if they had doubts, they probably would have stopped a long time ago.”

Since 2000, more than 800 reports from more than 50 weather modification projects have been submitted to the National Oceanic and Atmospheric Administration, with most focused on increasing precipitation. State weather modification budgets typically range in the hundreds of thousands of dollars. Utah, which has one of the most extensive seeding programs in the U.S., spends a little more than $700,000 a year on seeding, with contributions split between the state, municipalities, and other states in the Lower Colorado River Basin.

The recent efforts to expand long-standing cloud seeding programs have largely not met opposition, though some projects have been controversial. In New Mexico, which has no active cloud seeding operations, a proposal to begin seeding in the north of the state was abandoned in January after facing public backlash over concerns about environmental impacts, as well as the lack of consultation with tribal governments. Another proposal to seed clouds in the east of the state is under review.

Cloud seeding costs money, but the cost is relatively low compared to the value of water, even if the reports overstate increased precipitation, proponents say. And there do not appear to be environmental downsides to seeding. People are often concerned about contamination from silver iodide because silver can be toxic in high concentrations, Tessendorf says, but studies have found levels of silver iodide in cloud seeded areas are comparable to levels in unseeded areas and are unlikely to accumulate to toxic levels. Because seeding affects such a small portion of the total moisture in a given cloud, there also aren’t likely to be significant downstream effects where “you’re robbing Peter to pay Paul,” she says. In other words, seeding clouds over Colorado doesn’t deprive Utah of snow.

Geoengineer the planet? More scientists now say it must be an option. Read more.

In New Mexico, some commenters opposed to cloud seeding expressed concern that it represents a kind of hubris, that humans shouldn’t “play God” or mess around with nature. Such arguments have been made since seeding became possible. It’s worth pointing out, says McDonough, that seeding or not, “clouds aren’t pristine things.” In many cases, car exhaust and other industrial pollution has reduced the efficiency with which clouds precipitate by shrinking the size of cloud droplets. “Cloud seeding may be putting the clouds back to a more efficient state where they may have been prior to humans,” he says. Or at least prior to Charlemagne.