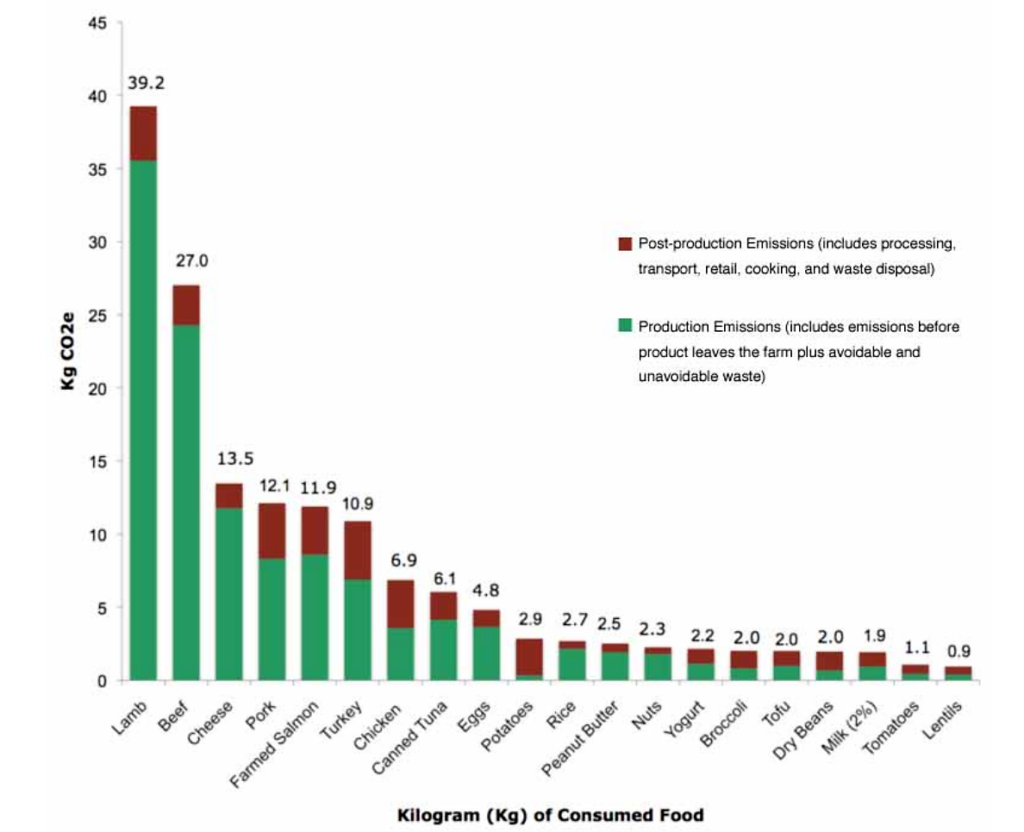 The average American eats approximately 220 pounds of meat per year. Food accounts for 10% to 30% of our household carbon footprint, and meat accounts for more than half of that.

A vegan diet may be the single most effective way for individuals to minimize their environmental impact. But giving up meat remains a challenge for many people. If meat is still part of the package for now, there are a lot of ways to cut carbon from your diet. One of the most effective is choosing your meats carefully — just switching from beef to chicken may reduce the climate impact of your food by half.

We usually provide good, better, and best options for making personal changes but in the case of meat, we start by pointing out the worst habits that add to your carbon footprint. Here are our suggestions to start a CO2 emissions campaign of your own by switching to more carbon-efficient meats and beginning to wean yourself off animal protein.

(Note: Climate change impacts in this article are measured in carbon dioxide equivalents, or CO2-eq. This metric converts the global warming potential of greenhouse gases like methane, which is especially relevant in relation to meat production, into an equivalent amount of carbon dioxide.)

Scientists use life cycle analysis (LCA) to determine the environmental impact of various activities. Unfortunately, LCAs of the climate impacts of food — even rigorous ones by respected institutions — produce different results.

Agricultural practices account for much of the variation — where you get your meat is an important factor in reducing your footprint. The emissions from a concentrated animal feeding operation, known as a CAFO (“Kay-foe”), will not be the same as a family farm. Regional practices also result in radically different CO2 emissions. For example, a family farm in the U.S. often uses very different practices from one in Iceland, where lamb produces less than half the U.S. average CO2-eq.

Even within a region, emissions can vary dramatically. One study found that lamb production in Patagonia could emit from 10.64 to 41.32 kilograms of CO2 equivalent per kilogram of meat.

The choice of measurement methodology also introduces more differences. For example, the Environmental Working Group’s LCA of meats averages emissions from three American farming systems to place lamb at 39.2 kg CO2-eq. On the other hand, the Visual Capitalist estimates the emissions from lamb and mutton at 24 kg CO2-eq based on Poore & Nemecek’s global study of thousands of farms. This does not mean that LCAs are useless — they represent averages that can be applied to your situation.

Here’s the key fact about meat carbon footprints: Beef and lamb may trade places, but they top every list. Rather than focusing on exact scores, savvy consumers will group meats in categories from bad to best — and reduce or eliminate consumption of these meats accordingly.

The average American will eat around 58 pounds of beef this year. At between 27 and 60 kg CO2-eq per kilogram greenhouse gas emissions, more than 6 kg CO2-eq per serving, beef tops most lists as the most carbon-intensive of all foods.

OurWorldinData looked at both short-lived (methane) and long-lived (carbon) gas emissions and placed beef products near the top of both lists. Sadly for nonvegan vegetarians, emissions from cheese are similar to those of beef and lamb, routinely ranking above most meats (buying local cheese can help). No matter how you look at it, the climate cost of cattle is shockingly high.

The Environmental Working Group (EWG) estimates that producing 1 pound of lamb produces more emissions than the same serving of beef. However, Americans don’t eat much lamb and mutton.

Per capita lamb consumption in the United States is about 1 pound per year. But at 39.2 kg CO2-eq per kilogram, replacing beef with lamb is not going to improve your foodprint.

In short, avoid both beef and lamb to minimize your foodprint. Swap these proteins for the options below to cut your emissions by up to one-half in your next meal.

U.S. per capita pork consumption was 52 pounds in 2020. The “other white meat” is a better option than beef.

Unlike cows and sheep, pigs are not ruminants, which means they produce a lot less methane, but thanks to intensive farming operations, pork has the third-highest environmental impact among meats.

Poultry has a smaller foodprint than other meats.

Poore & Nemecek’s international study found that poultry averages 6.0 kg C02-eq per kilogram of meat. And outside the U.S., production methods are often less carbon-intensive. The EWG divides American poultry into chicken (at 6.9 kg CO2-eq) and turkey (at 10.9 kg CO2-eq). Note that turkey is in a tie with pork.

Eggs have less impact than meat and may be produced even more sustainably at home.

In a sign that many Americans are reducing their foodprint, beef and pork consumption have dropped while poultry consumption is on the rise. Americans ate an average of 97.6 pounds of chicken per person in 2020, and just 15.8 pounds of turkey.

Fish is a large and widely varied category. Farmed prawns and salmon produce similar emissions to pork, while wild-caught fish can have a lower impact than eggs.

With some consumer research at SeafoodWatch.org, fish can be your last, least impactful animal protein source.

In general, red meat is worse for the climate than pork, which is worse than poultry.

But where and how an animal was grown and how far the meat traveled to reach your plate can all make a big difference. When you also consider the food safety and ethical concerns, the effort of carefully researching every bit of animal protein you eat may outweigh the effort of an even greener choice — eating less animal protein.

This article was originally published on August 21, 2020. Some data in this article were updated in January 2022.