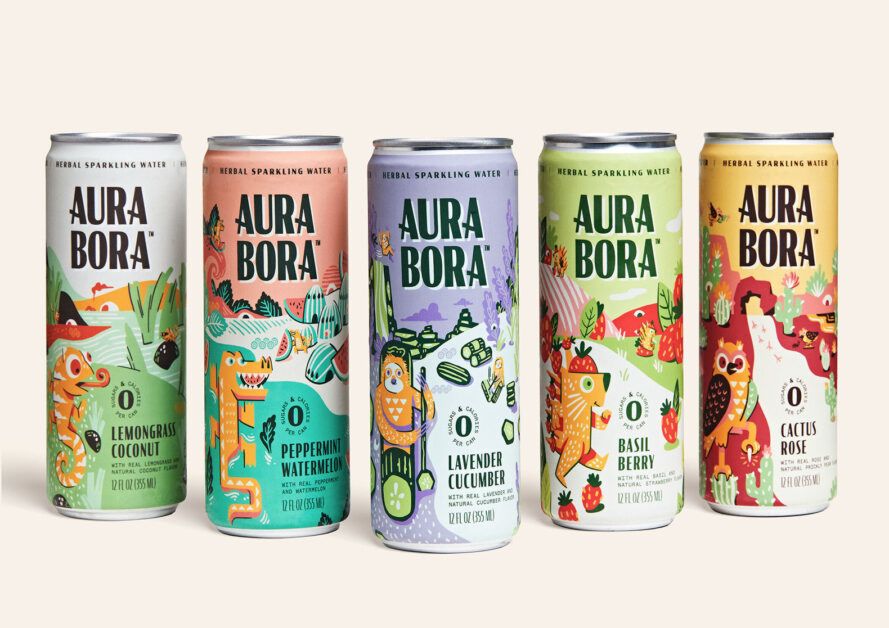 Aura Bora sparkling waters give back to the planet

For those who get bored of drinking plain water or prefer to add bubbles without calories, sparkling water is a popular choice. But along with the bubbles, many sparkling waters offer bland flavors or artificial junk. Aura Bora Founders Paul and Maddie Voge set out to change all that with plant-based flavor combinations that are bold, natural and different.

Aura Bora sparkling water is made using recipes infused with herbs, fruits and flowers. The flavor options aren’t your typical lime, berry and mandarin. Instead, there are combinations that jazz up the standard with lime cardamom, elderflower grapefruit, hibiscus passionfruit, ginger Meyer lemon, chai cranberry and more (see review below). Read the ingredient list on any can to see unique offerings like basil, cactus, coconut and lavender.

Aura Bora is dedicated to providing drinks that are free of the bad stuff and full of the good stuff. Inasmuch, their offerings are all zero calorie, zero sugar, non-GMO, plant-based, gluten free, artificial flavor free and vegan. Additionally, the company is equally dedicated to giving back to the environment as members of 1% for the Planet.

The story of Paul and Maddie’s entrepreneurial journey starts with the absence of soda in their childhood homes, which guided them towards sparkling water at a young age. After meeting at summer camp in New Hampshire, they continued to share their love of the outdoors ever since. They said, “Both grew up as firm advocates for the environment — practicing ‘Leave No Trace’ on the hiking trails, buying second-hand clothing, avoiding plastic and outfitting their home with solar panels.”

Once they entered the tech world, they found an underwhelming assortment of sparkling water options in the corporate break rooms. It inspired them to ask if there was a better sparkling water alternative. As the story often goes, when they couldn’t find it, they made their own. Equipped with a home carbonator and friends willing to taste test, the groundwork for Aura Bora was born.

As luck and hard work would have it, Paul was able to anchor Aura Bora in Whole Foods stores in the Boulder, Colorado region following a trade show event in the area. With continued persistence, Paul and Maddie were invited to pitch the brand on the famous “Shark Tank” TV show where Robert Herjavek said, “This might be the best branding we’ve seen in all 12 seasons.”

Aura Bora craft flavors can be found in myriad retail locations including Sprouts, Whole Foods, Thrive Market, Amazon and many natural grocery stores. Watch for limited edition flavors where the company donates 20% of profits from the sale of those products.

In explaining the thought process behind the brand name, the company explained, “Paul and Maddie knew that rhymes are memorable. And since their sparkling waters were notably earth-inspired, herbal and colorful, they were drawn to the word ‘Aura’ — and Aura Bora was born, with associations to the beautiful Aurora Borealis and island of Bora Bora. There was an added bonus too: as a lover of design, Maddie was happy to have a symmetrical, stackable eight-letter square.”

The shipment arrived very quickly and was packaged in recyclable cardboard with no plastic or unnecessary waste. Good start.

The variety pack includes a 12 pack with five different flavors. These are notably different flavor combinations. My husband and son are rabid sparkling water drinkers so I brought them in on the tasting.

I love lemongrass, so this was an exciting combination. The lemongrass flavors come through subtly in the front, followed by almost a creamy finish that speaks to the coconut.

This was the first flavor I grabbed because I have a bit of an obsession with basil and, boy howdy, did it deliver. This is a bold basil-forward flavor. In fact, I’m not sure I pulled berry out of it at all, although my son reported tasting it on the back end. The basil may be too punchy for some people, but I found the flavor mellowed after the initial assault on the taste buds.

I have a sensitivity to lavender, so I left this one up to the husband and boys to review. They reported a distinct flavor of lavender that then morphed into the expected cool and smooth finish that makes cucumber a popular addition to drinks.

This was a favorite with both my boys. They described it as light and refreshing with a nice balance of flavors. The Aura Bora website offers mixology suggestions and I’m eager to try this in the Peppermint Mojito recipe!

The word “rose” put me off a little, as I’m not a fan of rose scents. But this is perhaps the mildest of the mixtures we sampled, cactus rose is both the earthy wildness of cactus and the English garden of rose.

Overall, each can we sampled had distinctive notes of the plants and herbs in the title, but none were overly dominant (except perhaps the basil for some). Rather, they offer more of a complex flavor profile that keeps me wondering what other flavors they will come up with in the future.

This site uses User Verification plugin to reduce spam. See how your comment data is processed.
alcohol and diabetes. Juga.