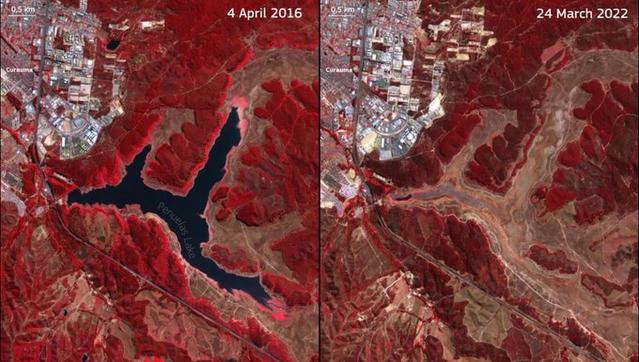 After More Than a Decade of Drought, Chile’s Peñuelas Lake Has Nearly Vanished

A once-sprawling lake, the Peñuelas reservoir in central Chile has all but disappeared, desiccated by a 13-year drought. The resulting water shortage has fueled tensions over supplies needed for farming and lithium mining, and spurred the Chilean capital of Santiago to prepare for rationing.

The ongoing drought is the most intense and long-lasting in at least 400 years, rendering the lake bed dried and cracked, dotted with the skeletons of decaying fish, Reuters reported. The Peñuelas’ drying has been partially caused by higher temperatures and a reduction in rainfall. At the same time, snow in the Andes is melting faster or turning directly to water vapor, leaving mountain-fed streams at a trickle in the summer.

The reservoir, near the city of Valparaiso, once held enough water to fill 38,000 Olympic-size swimming pools. It now has enough for just two.

“Basically what we have is just a puddle,” Jose Luis Murillo, general manager of ESVAL, the firm supplying water to Valparaiso, told Reuters. “This is especially significant if you think that several decades ago the Peñuelas reservoir was the only source of water for all greater Valparaiso.”

The thinning of the ozone layer over Antarctica is shifting weather patterns, drawing storms away from the Chilean coast. As the ozone layer heals, “one can expect a lessening of the summer drying in southern Chile,” a 2018 study suggested. But with rising temperatures permanently altering the climate, a 2019 study anticipates “only a partial recovery of central Chile precipitation in the decades to come.”

This site uses User Verification plugin to reduce spam. See how your comment data is processed.
Dessert - the delicious recipes. The only difference is that the virtual address you use as the official address will be the checking point. De bedste action oplevelse tilbud i syddjurs.