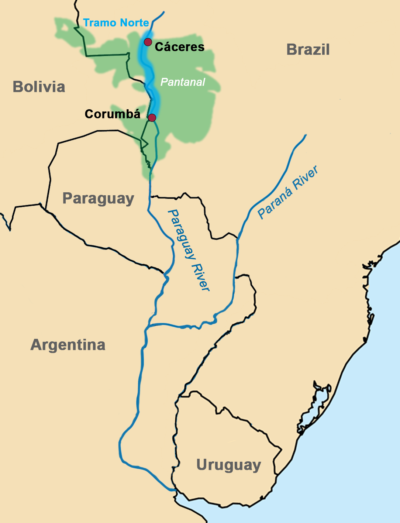 A Waterway Project in Brazil Imperils a Vast Tropical Wetland

It takes 14 hours for Lourenço Pereira Leite to reach his fishing spot.

He and his brother-in-law chug along in a simple one-engine motorboat, towing their traditional fishing canoe behind them. They’re in the Pantanal, the world’s largest tropical wetland, traveling on its main body of water, the Paraguay River. At almost 47 million acres, the Pantanal is 10 times the size of Florida’s Everglades and flows across Bolivia, Paraguay, and Brazil. The vast wetland, a UNESCO World Heritage Site, is made up of more than 1,200 rivers and streams rushing into the region from the eastern Andes.

After winding along 150 miles of the Paraguay River’s deep curves, Pereira Leite and his brother-in-law arrive at Pacu Gordo, a campsite in Brazil among the lush green trees along the river’s edge. They tie up their boat and set up a makeshift cage around the area where they plan to sleep — protection from the Pantanal’s abundant jaguar population. The fishermen will spend two weeks along the river, targeting the prime species — pacu and pintado — that will fetch the highest price.

A third-generation fisherman, Pereira Leite is part of a group known as ribeirinhos, traditional people who live on a river’s edge and support themselves with sustainable fishing and small-scale farming. When he was younger, Pereira Leite, now 52, was able to reach his quota of 275 pounds of fish per week in a fraction of the time and much closer to his home on the periphery of Cáceres, a city of almost 95,000 in the heart of the Pantanal. But the arrival of large-scale ranching and farming, infrastructure development, drought, and severe fires in 2020 are steadily taking bites out of the Pantanal, threatening the ribeirinhos and their way of life. He fears his three children will be unable to carry on his traditional fishing lifestyle.

Now a new threat is on the horizon. With the rapid growth of industrial soybean farming in the Pantanal, a proposal to build a commercial waterway has been revived, with three ports — coupled with major dredging and course-alteration projects — planned for the Paraguay River. One of those planned ports, known as Barranco Vermelho and located in Cáceres, has already received a preliminary license from the Environmental Council of Mato Grosso state, the first step in the permitting process that would allow the port to be built. The construction of a second port in Cáceres is also planned, as well as another in the nearby city of Corumbá. All three are being privately funded.

Building these ports, experts say, would open the door for government approval of the construction along the rest of the waterway, all designed to accommodate barges that would transport millions of tons of soybeans out of the Pantanal’s many farms. Critics say the scope of the proposed Paraguay River project is so extensive that it would irretrievably damage the Pantanal.

Acting like a giant sponge, the upper part of the Pantanal basin, where Cáceres is located, retains floodwaters from October to March and then slowly drains between April and September. That pulsing of water — a seasonal rise and fall that provides natural flood protection for those who live downriver — is what allows for the wetland’s distinct and vast biodiversity. During the rainy season, rivers overflow, flooding lowlands and creating a rich landscape of vibrant blues and greens, dotted with shallow pools of water, rich marshes, extensive grasslands, and dense forests. Teeming with everything from jaguars and jabiru storks to caiman and giant otters, the Pantanal is home to thousands of species of flora and fauna, many of which are endangered or endemic to the region.

The Pantanal also is home to the Taiamã Ecological Reserve and the Pantanal Matogrossense National Park, both important refuges for biodiversity and both located in the Tramo Norte, where three ports are proposed. The two areas harbor one of the highest densities of jaguars in the world, as well as several other vulnerable species, including the giant anteater, the giant armadillo, and the hyacinth macaw. A group of jaguars in the Taiamã Ecological Reserve was recently discovered to be fishing directly from flooded areas of the Pantanal. Experts say that if the river is dredged, fish — one of the jaguars’ main food sources — would be directly affected.

A judge ruled the project’s environmental report was inadequate, riddled with errors, and lacking knowledge of the region.

The Pantanal is a tremendous resource for the people who live there, including ribeirinho and Indigenous communities. They often sustain their families by fishing or starting small businesses based on living on the land, selling things like honey from their own hives and fruit harvested from their trees.

If the planned waterway were to be built, however, much of that would change.

Early this year, a federal judge granted an injunction requesting that the licensing process of the Barranco Vermelho Port be stopped. The judge ruled that the environmental impact report for the project was severely inadequate, riddled with errors and lacking proper geographical knowledge of the region and analysis from qualified experts. That injunction was later suspended, leaving both those for and against the port waiting for the courts to decide whether the project will proceed. It’s unclear which way the courts will go, but experts worry that the anti-environment policies of nationalist President Jair Bolsonaro — coupled with the power of soybean interests — may seep into judicial decisions.

The portion of the Paraguay River known as the Tramo Norte (North Section), running between the cities of Cáceres and Corumbá, was dredged in the 1990s to accommodate small barges, but a judicial order stopped the dredging in 2000 over environmental concerns.

In 2021, under Bolsonaro, a much larger project was launched, with the National Department of Transportation Infrastructure — under pressure from soybean growers along the Paraguay River — approving a major increase in dredging. This project threatens to turn the Tramo Norte, the river’s most fragile stretch, into the northern section of a commercial waterway known as the Hidrovia Paraná-Paraguai, or HPP.

According to GPG Serviços Portuários, the company charged with Barranco Vermelho’s construction, the port project now under consideration will cost roughly $20 million and will affect only 86 acres. But experts say it will have many knock-on impacts and affect a much wider swath of the Pantanal because it is only the beginning of the larger HPP project.

For the Kayapó, a long battle to save their Amazon homeland. Read more.

“It creates the pressure to have the rest of the enterprise approved,” says Philip Fearnside, an ecologist at Brazil’s National Institute for Research in Amazônia (INPA), of the potential approval of the construction of the initial port. “Once you’ve invested in these ports, this waterway is just the next step. It’s one part of this wider problem of the licensing system in Brazil being progressively weakened, transferred from the federal government to the state governments. This makes it much easier and cheaper and faster to get these [projects] approved.”

Paula Isla Martins, an environmental analyst and researcher at the nonprofit Ecology and Action, agrees. Planning several ports and asking for individual licenses to build them, she says, creates a loophole that effectively allows the entire waterway to be built without proper environmental licensing and inspections looking at the broader, cumulative impact of the individual projects.

Re-engineering the Paraguay River would cause irreparable damage to the habitat of thousands of species, conservationists say.

“You can’t consider the impact of a port in isolation,” says Martins. “Ports affect the entire trajectory of where boats and barges will travel. And this particular section, the Tramo Norte, is the most delicate part of the region.”

The Pantanal has been under assault for decades, with drought and burgeoning agricultural activity leading to a 68 percent loss of water area since 1985. In recent years, the situation has gotten worse. Unprecedented fires burned almost a third of the Pantanal’s land area, including portions of almost all Indigenous lands and protected territories. An estimated 17 million vertebrates were killed in that year’s fires.

Most of the Pantanal lies in Brazil, which is also one of the world’s leading producers of soybeans, growing roughly 120 million metric tons of the legume annually. The Barranco Vermelho port is expected to have a capacity of 360,000 tons in its first year of operation and to reach 3.5 million tons within three decades. If additional shipping ports are built along the Paraguay River, those numbers could climb steeply.

What makes the Paraguay River — which is, on average, 2,000 feet wide — difficult for barges to navigate are its constant bends and curves and its many sandbanks. For the Barranco Vermelho and other ports to operate, the river would have to be dredged extensively at 17 sites, according to the Federal University of Paraná, responsible for the environmental study conducted as part of the licensing process.

Deepening the river, says the non-profit SOS Pantanal, would make its water flow faster and change the natural flooding dynamics of the wetland. It would also lower the water table, “with effects throughout the Pantanal wetlands,” according to a letter from Fearnside and five other experts published in Nature. The scientists asked the Mato Grosso state government to reverse its decision to start the licensing process for the Barranco Vermelho Port and to ensure “decision-making is based on scientific advice.”

Eliminating its curves at strategic locations, so barges could travel in a straight line rather than following the natural winding path of the Paraguay River, is another part of the plan to get the ports and the rest of the waterway up and running. While reengineering the curves would save agrobusinesses time and money, it would also cause irreparable damage to the habitats of the thousands of species, changing the course of the river and the ability of wildlife to return to the same spots to reproduce, rest, and feed, according to SOS Pantanal.

For Indigenous and ribeirinho peoples, like Pereira Leite, it would mean the disruption of their centuries-old way of life. He says that the number of boats already on the river from growing agricultural and development activity has started to affect his ability to provide for his family. The noise scares the fish off, and the boats tangle his lines. If barges begin regularly plying the Paraguay River, he says, “it will be the end of our Pantanal.”

“They want us to adapt to them,” he adds, “but we’re not the ones destroying the Pantanal. If anyone needs to adapt, it’s them.”