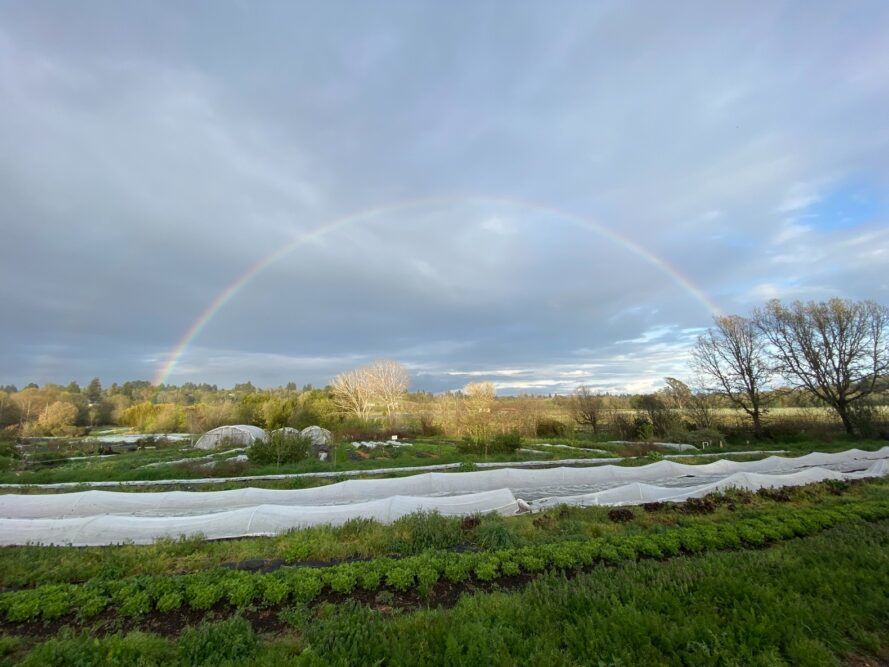 A unique no-till and regenerative farm is here in California

The line between soil and dirt is anything but fine. Without knowing it, farmers have been stripping the soil of essential nutrients for generations. But now we know, and modern farmers like those at Singing Frogs Farm are reestablishing how our crops are grown, benefiting the environment, community and local economy.

Located in Sebastopol, California, the 8.8-acre farm and surrounding area was originally managed in the hands of the Kashaya Pomo and Coastal Miwok Peoples. Current owners Elizabeth and Paul Kaiser honor the land through regenerative farming practices, and protecting the long-standing native basket grasses the Indigenous people used for making water-tight baskets.

How it all started

The Kaisers developed Singing Frogs Farm after meeting in the Peace Corps in West Africa. The duo pursued hands-on experience and university degrees in tropical agroforestry, natural resource management, international development and public health while working in varied locations around the world. After marrying, they returned to their roots in Sonoma to start the farm.

Singing Frogs Farm is an example of everything regenerative agriculture can offer — productive crops, healthy soil, year-round (rather than seasonal) jobs and, of course, food and flowers that are organically grown.

The farm reports a five-fold increase in the organic matter of the soil. Obviously, nutrients are good for plants, but they’re essential for maintaining the integrity of the soil too. Once lost, plantable soil becomes dirt. Crops don’t grow in dirt. In theory, the process is simple: support the land and it provides in return.

They are all about the natural

At Singing Frogs Farm, they are dedicated to not using any sprays of any kind, even those labeled as organic. Instead, they rely on the natural cycle of the ecological system. In a nutshell, the right plant selections attract healthy, hungry insects that feed on the farm’s problem insects, therefore creating a natural insecticide with no chemicals. Because the soil is rich and nourished, there’s no need for fertilizers either.

As a vegetable and flower farm, the native plant choices also attract and support a wide variety of pollinators, increasing native bee and bird populations. In fact, incorporating animals into the cycle of crop development is one of the five foundational philosophies of the farm. The other four are: minimal soil disturbance, high yield of living plants at all times, plant diverse varieties and keep the soil covered.

Singing Frogs Farm embraces nature’s relationship between plants and animals. Rather than keeping them entirely separate, both benefit from interaction. For example, goats feed on the weeds, naturally keeping down invasions without mechanical or chemical needs. Similarly, chickens are rotated to different areas on the farm to free range feed and benefit from the food that’s readily available. Rotational grazing improves soil health and animals also provide manure used for the compost made on the farm.

Biodiversity in the plants and animals creates a healthy ecosystem that mirrors what nature intended. It provides plants that photosynthesize, sequestering carbon and releasing oxygen, while also feeding animals and supporting pollinators. It also enhances the nutrient base in the soil, which directly improves the quality of the produce grown. In addition, a healthy soil requires less resources, including significantly less water during the growth cycle.

In a 2019 study comparing Singing Frogs Farm and a nearby organic (but not regenerative) farm in the area, they report, “By comparison, the soil at Singing Frogs Farm had over 400% more soil carbon, our water infiltration rate (to reduce erosion) was almost seven times greater, our soil had almost 300% more soil biology and our overall soil health score (taken from 30+ variables) was roughly three times greater.”

The Kaisers offer year-round employment to a crew that varies between four to eight members. The team is dedicated to regenerative farming practices throughout the process of seeding, planting, harvesting, managing the soil, staffing farmers’ market booths and providing CSA boxes to the community.

In addition, the Kaisers are on a mission to educate the benefits of regenerative farming. With their successes and continued learning, they share with other small-scale farmers throughout the community via farm tours, workshops and consultations. They also serve on several boards related to agriculture and present speaking engagements around the world. Several of their own employees have gone on to start their own no-till, regenerative farms, ranging from California to Japan.

The goal for the Kaisers is not only to feed the community, but to inspire and engage every farmer to do the same.