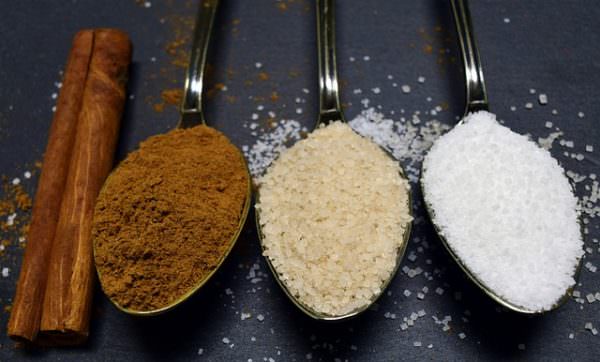 A Guide to Baking & Cooking With 10 Healthy Sweeteners

As you stare through the pastry display case like a carbo-crazed zombie, the maple donut, ruby-red velvet cupcake, decadent brownie, and gooey cookie cunningly lure you in. Let’s face it, we’ve all fallen victim to these sweet indulgences from time to time. Their ubiquity at grocery stores, coffee shops, and restaurants has done nothing to strengthen our willpower.

But spikes in blood sugar and rises in both obesity and diabetes call for some serious self-control for not just adults, but kids, too. According to the Centers for Disease Control and Prevention, children and adolescents aged 2 to 18 years are consuming 40% of daily their (empty) calories from added sugars and fats.

Granulated sugar is the go-to for many bakers for its affordability, availability, and ability to trap and hold moisture, brown, and crystalize. But with that baker’s perfection comes a hefty price tag on health.

Table sugar, or sucrose, is highly processed and stripped of most of its minerals and antioxidants. What you have left is empty calories — and a lot of them. Table sugar boasts a whopping 720 calories a cup, 200 grams of carbs, and contains 50% fructose and 50% glucose with a glycemic index of 60. Refined sugar is a big no-no for anyone trying to avoid insulin spikes or increases in blood glucose (blood sugar) levels. That includes, for example, diabetics and those trying to lose weight.

The good news is you don’t have to omit sweet treats from your life; you just have to bake smarter. If you’ve read our Guide to Healthy Sweeteners, you’re abreast of the dangers of artificial sweeteners and refined sugars. According to metaphysician and holistic healing expert, Blythe Metz, Ph.D., “We are designed to enjoy sweet treats, as long as we make sure there are clean proteins and healthy fats within the treat to balance our body’s absorption of the sugar.”

While many people reach for honey as a natural sugar substitute, according to Ayurvedic medicine, honey should never be cooked. In Ayurveda, toxins, also known as “ama,” are the root cause of many diseases and illnesses. The process of heating honey creates unwanted particles that adhere to the lining of the digestive tract.

However, you can enjoy the following natural sugar substitutes whether you’re baking or cooking.

Health information: Maple syrup is a terrific sugar substitute for baking, but you might not be familiar with the dehydrated maple crystals from maple tree sap. The crystals contain about 4 carbohydrates and 15 calories per teaspoon. Maple crystals and syrup are loaded with minerals, including calcium, potassium magnesium, manganese, and phosphorus. They also include iron and trace amounts of B2, B5, niacin, zinc, and folic acid — all are important for a healthy immune system, heart, and reproductive system. Maple syrup has a low glycemic index of 54, and 50% each of glucose and fructose.

Measurements: Use 3/4 cup of syrup or crystals for every cup of sugar called for in a recipe. Recipes will be moister if you use maple syrup, so reduce liquids in the recipe by 2 to 4 tablespoons. Maple syrup tends to make baked goods brown more quickly than sugar, so lower the oven temperature by 25 degrees Fahrenheit.

Tips: Maple crystals or syrup can be used in marinades, on cinnamon toast, in oatmeal or other hot cereals, in glazes, and in baked or raw desserts like cookies and candy. Always use 100% maple syrup, not table or pancake syrup, which is highly processed. Most brands of table or pancake syrup contain a high amount of corn syrup or high fructose corn syrup, according to Consumer Reports.

Health information: Also called coconut palm sugar, this sugar is derived from coconut nectar but doesn’t taste like coconut. Though high in calories, it has a low glycemic index of 35. Coconut sugar contains healthful polyphenols and antioxidants as well as minerals such as iron, zinc, calcium, and potassium. It is naturally high in amino acids and contains beneficial inulin fiber, which may slow glucose absorption.

Measurements: Replace regular sugar with an equal amount of coconut sugar. For example, if the recipe calls for 1 cup sugar, use 1 cup coconut sugar.

Tip: This is an excellent substitute for brown sugar, but should be used sparingly due to its high calories.

Health information: The sweetness of monk fruit (luo han guo) comes from antioxidants, called mogrosides, that are 200 times sweeter than sugar. They have been shown to have anti-cancer properties. One study on mice found that mogroside V inhibited the rapid progression of pancreatic cancer cells. Another study indicates that mogrodise IVe can be used as a supplement for treating colorectal and throat cancers. One packet of monk fruit crystals contains zero calories and less than 1 gram of carbohydrates.

Measurements: Replace regular sugar with 1/2 the amount of monk fruit extract. For example, if a recipe calls for 1 cup sugar, use 1/2 cup of monk fruit crystals.

Health information: Molasses contains approximately 50% each of glucose and fructose. Dark molasses boasts the highest antioxidant levels of all sweeteners. Blackstrap molasses contains the nutrients that get stripped from table sugar, including high levels of calcium, iron, and potassium as well as copper and B vitamins. It has a low glycemic index of 55.

Measurements: Replace 1 cup of sugar with 1-1/3 cup of molasses. Reduce liquid by two tablespoons for each cup replaced. Or, add 1 tablespoon of flour for every 1/4 cup of molasses used if there’s no liquid added to the recipe. Lower oven temperature by 25 degrees F.

Tip: Molasses has a distinct, bitter flavor and works best for dark-colored foods such as beans, cookies, dark bread, barbecue sauce, glazes, and pies with fall fruits or vegetables.

Health information: Jerusalem artichoke syrup is high in vitamin C, niacin (B3), and thiamine (B1), as well as a significant spectrum of essential minerals, according to Metz. These vitamins are stable during heating and processing. Jerusalem artichoke syrup is dark like molasses and has a slight bitterness to it. This plays into the alchemy of how it aids your digestion since it’s also a prebiotic.

Measurements: Substitute Jerusalem artichoke syrup for 1/2 of the sugar in any recipe, for added nutrition and moisture. Replace the other half of the sugar in the recipe with a dry sweetener, such as golden monk fruit crystals, maple crystals, or coconut sugar.

Tip: Metz advises using this unique sweetener in dark treats like spice cake, brownies, and chocolate muffins (which she makes with almond flour and oatmeal to beef up the protein and nutrients).

Health information: Stevia-based sweeteners are 200 times sweeter than sugar. One packet contains between zero and 1 calorie and 1 to 4 grams of carbohydrates, depending on the brand. Stevia has a glycemic index of zero.

Measurements: Replace 1 cup of sugar with 1 teaspoon of stevia.

Tips: Reduce the baking temperature by 25%. You can also increase baking powder or soda, to help the food rise and add texture, since stevia won’t do either. Also, you can add a fruit puree for moistness. If you desire some browning, leave at least 1/4 cup of sugar in the recipe to improve texture.

Health information: Made from ground dates, date sugar or date paste delivers many nutrients including potassium, calcium, and a host of free-radical-busting antioxidants. Dates have a low glycemic index of only 42.

Measurements: For each 1 cup sugar that the recipe calls for, substitute 2/3 cup date sugar.

Tip: Best for use in baked sweets such as cookies, cakes, brownies, and bars.

Health information: Agave boasts more calories than white granulated sugar and is comprised of about 80% to 90% fructose with the rest being glucose. When baking, always choose raw agave since it’s processed at a much lower temperature. It’s best for recipes that require little sweetener due to its high fructose content.

Measurements: For every 1 cup of sugar, replace with 2/3 cup of raw agave. You will also need to lower the oven temperature by 25 degrees F. Since it is a syrup, you’ll need to reduce the amount of liquid in the recipe by about 25% since your baked goods will brown faster.

Tip: Raw agave nectar may have more calories than white table sugar, but you’ll use less of it and therefore ingest fewer calories.

Health information: Bananas are packed with fiber, including pectin, as well as antioxidants and nutrients like magnesium and potassium. Bananas are excellent for both digestive and heart health. The glycemic index value of an average banana is 51.

Measurements: For every 1 cup sugar the recipe calls for, use 1/2 cup mashed banana. Bananas are also an excellent substitute for eggs and butter. In both cases, you would use equal amounts; replace 1 egg or 1 cup of butter with 1 mashed banana.

Tips: Use ripe bananas. To account for the moisture in the banana, use 2 to 3 tablespoons less liquid than your recipe calls for.

Health information: Xylitol belongs to a class of sugar alcohols that are non-nutritive, low calorie, low carbohydrate sweeteners. It has around 40% fewer calories than real sugar and an extremely low glycemic index.

Tips: Xylitol is a sugar alcohol that can be used in baking, but due to potential gastrointestinal issues, it’s best used in recipes that require a small amount of sweetener. Xylitol is heat stable and even provides some volume and texture, unlike other types of sweeteners. Do keep in mind that texture, moistness, and browning will be affected by using the sugar substitute.

Note: Xylitol is toxic to dogs.

To view our printable, condensed guide to baking & cooking with healthy sweeteners, click the image below. Today, you have a choice between numerous healthy sugar alternatives. When you substitute them for sugar in baking and cooking, you may have to make some allowances. Depending on the sweetener you use, the color may be lighter, the texture may be drier, and the volume may be flatter. But I promise that you won’t have to compromise on the most important aspect — your health.

Feature image by Brooke Lark on Unsplash. Originally published on May 7, 2019, this article was updated in May 2022.