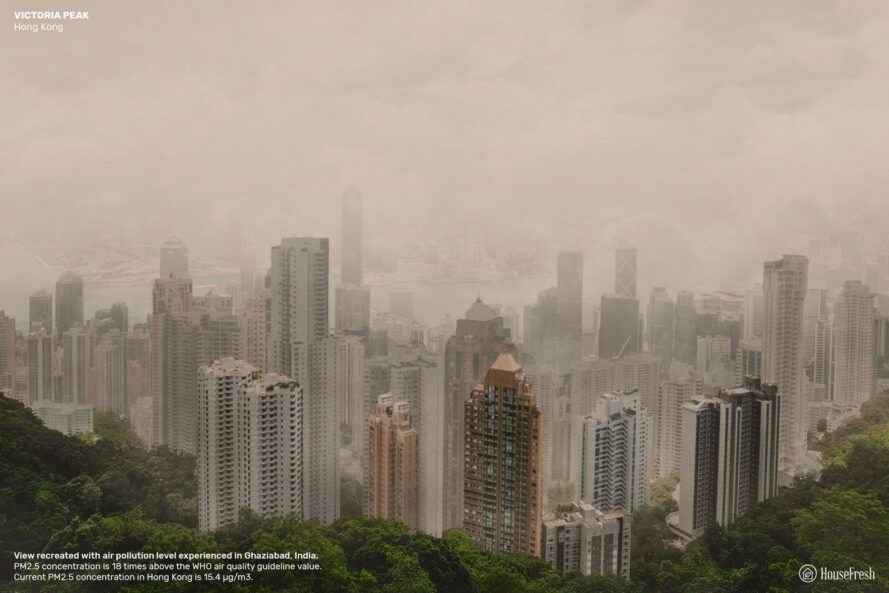 Housefresh completed a study that looks at the visual impact of worsening air pollution on the world’s top 10 landmarks. They warn us if we don’t reduce air pollution, we might lose some of the most beautiful places on Earth. From St. Peter’s Basilica in Rome to the Eiffel Tower, here’s how the world’s destinations with the most incredible views will suffer if air pollution continues to increase.

“We curated a list of the most beautiful city views around the world, pulling examples from articles from Insider, RTE and The Times,” Housefresh said. “The air pollution levels for each city with regards to PM2.5 concentration were sourced from IQAir.”

The side-by-side images show how current views from each city will look if pollution levels reach that of Ghaziabad, India, the second most polluted city in the world, according to IQAir. At the time the study was collecting its data, Ghaziabad had a PM 2.5 level 18.2 times higher than the WHO annual air quality guidelines value, with an Air Quality Index (AQI) of 169. A good rating falls between 0-50 AQI. Data was collected in February 2022.

Furthermore, Housefresh chose Ghaziabad because Hotan, China, the world’s most air polluted city, has the worst air mostly because of dust storms rather than man-made pollution. Housefresh took the images of these popular destinations and replicated visibility levels from Ghaziabad by sourcing images that “convey the smog levels experienced in Ghaziabad.”

So, can we prevent the world from continuing down the road of the world’s most polluted places?

“Ultimately, the effects of air pollution on our beloved views may be a gift in disguise,” the founders of the study said. “Poor air quality tends to go unnoticed day to day, and it takes events such as Beijing’s orange skies — or the unusually blue skies of lockdown life — to draw attention to the air we breathe.”

By making this problem visible, Housefresh hopes to contribute to the conversation about how air quality directly impacts our health and quality of life.

Seven million people die each year from air pollution related causes. And this is worsening with wildfires in the western U.S. and the Amazon. The World Health Organization recently reduced maximum safe levels of air pollution, reporting that polluted air is more dangerous than previously thought, and suggested that “almost 80% of deaths related to PM 2.5 could be avoided in the world if the current air pollution levels were reduced to those proposed in the updated guideline.”

This site uses User Verification plugin to reduce spam. See how your comment data is processed.
De bedste weekendophold tilbud i langeland. When looking for a locksmith in potters bar. Digital marketing company in mumbai.