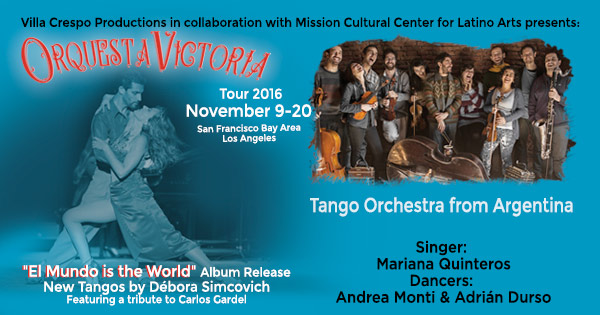 A 14-piece tango orchestra from Argentina, performing El Mundo is the World announced it will donate $1 for every ticket sold to the Save The  Earth Foundation for California tour.

Débora Simcovich the composer of El Mundo is the World shares her message, “connection, unity, building bridges, inclusively, we are all one.  The Pollution affects us all and The world is not just my world, it’s everyone’s, it’s OUR world.”

We encourage you to come out and support this show and $1 for every ticket sold to will be donated to Save The Earth Foundation.

Friends of Save The Earth can receive a discount with coupon code valid at time of purchase:  ovtango2016

Save The Earth Supporters get 10% discount:
To purchase tickets go to: villacrespoproductions.com
Choose any venue, click on tickets, enter ovtango2016 on the promo code field get a 10% discount!

San Francisco, CA: After last year’s successful California tour, Orquesta Victoria is back in the West Coast to present their new album El Mundo is the World, the second of San Francisco composer Débora Simcovich’s tangos. The 14-piece tango orchestra will display the vibrant dynamism and sheer elegance of tango in 7 cities of the San Francisco Bay along with 3 dates in Los Angeles. During this tour, Orquesta Victoria will present a wide-ranging repertoire that goes from the re-imagination of tango classics to new compositions that build thematic bridges between the streets of Buenos Aires and the experience of California’s diaspora.   They will be joined on stage by internationally renowned dancers Andrea Monti and Adrian Durso as well as renowned singer Mariana Quinteros.

Formed in 2010, Orquesta Victoria’s rich sound is influenced by classical music and jazz; its repertoire provides a new vision to 20th century tango. The group has performed at the 2014 Tango World Cup as well as the most important stages, theaters, and tango festivals in Buenos Aires, including the Casa Rosada (the equivalent of the White House) where they performed for heads of state. The orchestra is known for its regular weekly show at Café Vinilo, in Buenos Aires’s trendy Palermo neighborhood, and tours around Argentina, throughout South America, and recently in Germany, Austria, and Russia.

“The result is a kind of cinematographic excerpt where both the musicians and the audience play an important role”– Leonardo Liberman, El Mirador Nocturno http://elmiradornocturno.blogspot.com/

The orchestra is comprised of its conductor Ezequiel (Cheche) Ordóñez on bandoneón (a type of concertina and a key instrument in tango), joined by bandoneonista Hugo Satorre; Maritza Pachecho Blanco, Florencia Prieto, Noelia Garasino and Sara Tubbia Ryan on violin; Andrés Hojman on viola; Agustín Scheinkerman on cello; Alejandro Drago, main arranger and pianist; Pablo Pesci on clarón (base clarinet); Hernán Cuadrado on double bass; and Mariana Quinteros on vocals. In the group there are several Jewish members including Ordóñez, the grandson of world-renowned Polish-born Chess Grand Master, Miguel Najdorf, who in the 1930s escaped the Holocaust and made Buenos Aires his home.

“Through its musicians and repertoire, Orquesta Victoria exemplifies the best of tango music as an Italian, Jewish, and Spanish expression of an intercultural Argentina” –Débora Simcovich

Andrea Monti was trained as a tango dancer and teacher in her native city of Buenos Aires, Argentina. Her parents were faithful tango fans who introduced her to the magical world of dancing at a young age. Her solid training as a professional tango dancer is based on the contributions of her tango masters as well as her previous and parallel intense studies in contemporary jazz dance and technique. Andrea has been an active delegate member of the Association of Teachers, Dancers and Choreographers of Argentine Tango in Buenos Aires for the past 13 years.

In 2010 and 2011, Andrea was selected as an official judge of the “Mundial de Tango de Buenos Aires” (Buenos Aires Tango Dance World Cup, held yearly by the Ministry of Culture of the Government of the City of Buenos Aires). Since 2011, Andrea has also run, organized and co-directed the official tango competition Argentine Tango USA Festival and the USA Tango Championship, the official preliminary round, in San Francisco, of Tango Buenos Aires Dance World.

Adrian Durso is an internationally renowned tango dancer and singer. He performed at the 2016 Argentine Tango USA Official Championship and Festival hosted in San Francisco as well as other tango international events.

Mariana Quinteros was part of La Mar en Coche, an eleven member ensemble, which produced an album by the same name and performed at the Velma Café and also presented their songs on stages such as The Roxy, IFT and Teatro Santa María, in Buenos Aires, Argentina. An Argentine singer, she first introduced tango in her repertoire in 2004, in a season carried out at La Vaca Profana. Since then she has chosen tango as her voice and her true passion. In 2012 she presented her album “Carmín,” with a carefully selected repertoire including long-forgotten melodies, all of them with modern arrangements. She performed on Buenos Aires stages such as Café Vinilo, Clásica y Moderna, La Dama de Bollini, Salta y Resto, and the El Almagro Tango Club.

What makes this tour special?

“When I sang my own tangos in Argentina or pitched them, I was seen as an oddity.  A new generation had to come to the fore (Orquesta Victoria) to be open to the fact that women actually compose original tangos, and do not just sing the old, traditional repertoire or dance to them. “ –Débora Simcovich

One of the most captivating aspects of Orquesta Victoria’s body of work is their collaboration with Débora Simcovich, an Argentine born tango composer based in the San Francisco Bay Area. Débora is a native of the Jewish neighborhood of Villa Crespo in Buenos Aires where she began writing tangos as a teenager as a way of expression and connection to her homeland. She later left Buenos Aires and came to the Bay Area, a process marked by the longing of the immigrant experience and the opportunity to learn about many different cultural streams. Throughout her time in the Bay Area, her tango music creation grew and continued to form a cultural bridge to Buenos Aires and her roots to her beloved neighborhood of Villa Crespo. During a trip to Buenos Aires a few years ago, Débora had the unexpected opportunity to attend an Orquesta Victoria live concert, fell in love with their music and made an immediate a connection with them.   After their conductor heard her compositions, the admiration was mutual. This was the beginning of a collaboration between Débora Simcovich, an Argentine Jewish immigrant in the Bay Area who challenged gender norms by composing tangos in a male-dominated music genre, and Orquestra Victoria, from Buenos Aires, a collective of young musicians seeking to redefine the traditional canons of tango by transcending fixed spaces and placing their music at the intersection of broad musical experiences. “When I sang my own tangos in Argentina or pitched them, I was seen as an oddity.  A new generation had to come to the fore (Orquesta Victoria) to be open to the fact that women actually compose original tangos, not just sing the old traditional ones or dance to them,” explains Débora. Their shared story is a powerful female-driven tango performance that narrates a complex, multi-cultural, interconnected, and boundary crossing Mundo that is also the World.

Villa Crespo, one of the most legendary and important Jewish neighborhoods in Buenos Aires, was identified by musicologists and historians as one of the cradles of the tango, a music and dance genre tracing its origins to the waves of immigrants from all over the world that arrived through the wide doors of the Río de la Plata port at the turn of the 20th century.  Within this influx of immigrants there was the largest number of Jews that arrived in any Latin American country. One of the areas they settled in was the neighborhood of Villa Crespo where, along with other immigrant groups, especially Italians, they became part of the human tapestry that created tango music

$1 per ticket sold will benefit Save the Earth Foundation

in collaboration with Mission Cultural Center for Latino Arts presents

El Mundo is the World Tour